A Grade 9 girl was tackled by staff members within minutes of allegedly stabbing classmates at a suburban school east of Toronto.

Six students and three staff members were left with non-serious injuries after the incident at Dunbarton High School in Pickering, which sent students into locked classrooms for about two hours while police deployed helicopters and an armed response team.

Later Tuesday, students passed around the link to a blog on Tumblr, a social-networking website, that seemed to warn of the stabbing weeks in advance.

The blog, full of "selfie" photos depicting the girl the students said was the suspect, was written by a 14-year-old who began in mid-January to describe an urge to carry out a stabbing rampage at school, mentioning the idea in four separate posts.

She wrote at first that the plan made her "panicked." What she really wanted, the girl wrote, was to die, and she hoped police would kill her when they arrived. She also wrote that she would have preferred to use a gun but only knives were available. 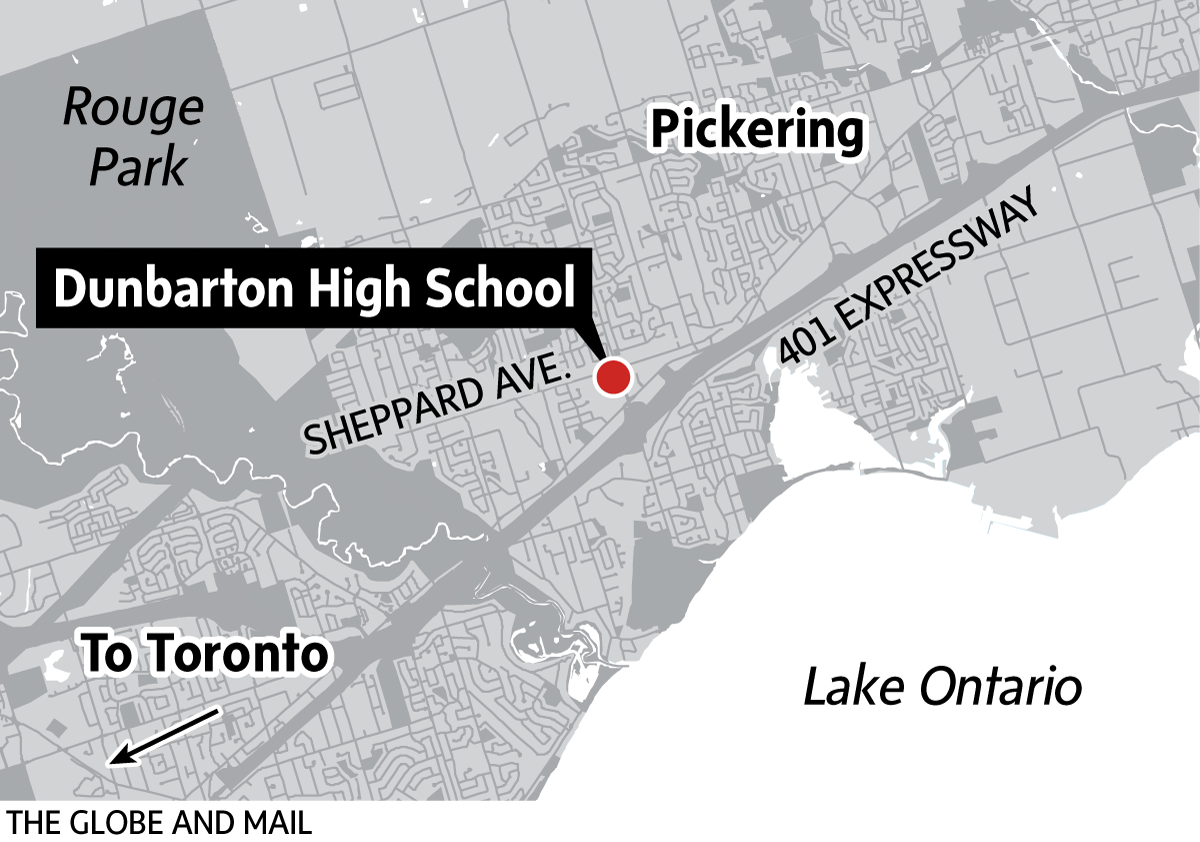 Police say the 14-year-old girl, who was taken into custody, was believed to be carrying two knives when the incident occurred about 8:30 a.m. in the school's front hallway. Students said the knives were about six to eight inches long.

Students described a chaotic scene just after the first school bell, as many streamed into the school.

"I was at my friend's locker, and we heard her laugh, and it was a really distinct laugh," said Ruby Yang, 17. "It was really high-pitched and sharp. We heard the same laugh when the teacher was tackling her.

"She waited until the bell rings, so that's when everyone starts walking around," Ruby said. "A lot of people walked into the school when it was happening. A teacher just told us to go into classes and everyone started yelling and running and pushing."

Four of the injured students were taken to hospital, with one of their injuries initially believed to be serious, but ultimately they all turned out to have "Band-Aid-type" cuts that required a couple of stitches at most, Sergeant Bill Calder of Durham Regional Police said. All were released by the afternoon.

Students said two of the adults who intervened were a teacher and a guidance counsellor. Patrol officers, the closest to the school at the time, arrived soon after, Sgt. Calder said. "End of the day, great work by the teachers, who did what they had to do," he said.

Grade 9 student Jaida Lindo, 14, said many of the students attacked were also in Grade 9, and one in Grade 10. She said she didn't believe that the girl had a relationship with them.

One girl who fought back ended up with the injury that police initially thought was serious, said Jaida's mother, Sharon Lindo, who spoke with the injured girl's mother after the attack. "She was trying to punch and kick her a couple of times to get her off of her," she said.

The two girls fell to the ground together and the attacker was able to stab the victim at close range. According to the injured girl's family, "they didn't know each other at all," Ms. Lindo said.

The school, on a quiet residential street, has about 1,500 students. Two hours after the attack, a few dozen parents milled around outside, waiting to pick up their children and friends.

Only a few minutes elapsed between the beginning of the lockdown and when students were told what was happening, said Sukhraj Klair, whose 17-year-old daughter attends the school. During that time, at 8:39, she sent him a frantic text: "DAD, WE'RE IN LOCKDOWN. IT'S NOT A DRILL." He rushed to the school.

"I think it's okay, but sometimes as a parent you just want to make sure, 100 per cent," he said.

Witnesses to the attack were ushered to the school cafeteria to speak to psychologists and to give statements to police. Students were texting constantly, and, with details of the stabbing spreading quickly on Twitter, it was important to speak to witnesses as soon as possible to get their unadulterated memories, Sgt. Calder said.

He said Durham schools often go into lockdown when there are crimes in progress nearby, such as holdups at convenience stores, but lockdowns sparked by violence within the school are much more rare.

Even though the suspect was apprehended quickly, it was important to maintain the lockdown because it wasn't clear if the individual was acting alone, and police needed to reach all the witnesses and the injured students, who could have run away or hidden, he said.