In what's being touted as a "uniquely successful" outcome, most of the 76 hectares of greenspace surrounding the David Dunlap Observatory in Richmond Hill will become a public park.

This week, the Ontario Municipal Board ruled in favour of a multi-party settlement agreement, involving once-adversarial groups. It clears the way for the developer, Metrus Development Inc., to build 520 housing units on the site and for the town to assume ownership of the historic observatory and 40 hectares of forests and fields.

When established by the University of Toronto in 1935, the observatory housed the second-largest operating telescope anywhere. It was through this lens that Dr. Tom Bolton first confirmed the existence of black holes in 1971. But the telescope was becoming less remote and light pollution from encroaching subdivisions was a growing problem.

In 2008, the university sold the observatory and 76 hectares of now urban greenspace to Metrus for $70-million.

The area was half the size of Toronto's High Park and the largest greenspace in Southern Richmond Hill. It contained deer, coyotes, a colonial farmhouse from the 19th century – and plenty of walking trails that locals had gotten used to thinking of as their own.

A citizen's group formed to lobby for its protection. The David Dunlap Observatory Defenders (DDOD) rallied opposition to the plan by Metrus (and subsidiary Corsica Development Corp.) to build 883 units.

Metrus proposed to protect the heritage buildings and donate an undefined amount of land to the town for parkland, but it wasn't enough. In 2010, Richmond Hill's city council rejected Metrus' request for amendments to the Official Plan and zoning by-laws to allow housing on the institutional lands. Metrus appealed to the OMB, and the OMB suggested everyone sit down and talk.

Five parties agreed to mediation, including Metrus, the town and the DDOD.

"We thought it was imperative to be part of the mediation," explained Karen Cilevitz, an amateur astronomer and the chair of the DDOD.

Ms. Cilevitz said their relations with Metrus had once been adversarial, but said all involved struck a new tone during the seven months of negotiations that ended last year.

"In this case, the position of Corsica/Metrus was admirable and honourable," she said. "They stepped up to the good corporate citizen plate."

Ana Bassios, commissioner of Planning and Regulatory Services for Richmond Hill, agreed. "The fact that these five parties came together in agreement, it's a unique outcome," she said. "Everybody wins on this one."

Marianne Yake would disagree. She is president of the Richmond Hill Naturalists. Her organization appealed the five-party settlement agreement, and it was that appeal that the OMB finally weighed in on this week.

She said she is "very disappointed" in the OMB decision to accept the settlement agreement. She called it the "cavalier treatment of a regionally significant woodland."

Ms. Yake criticized the "blithe assumption" that Metrus will be able to deal with the hydrogeological issues on the site without affecting the surrounding neighbourhood, wetlands or the role the property plays as part of the Don River watershed. Metrus did not respond to requests for comment.

Ms. Yake said her group would  be examining options for continuing the fight, but as far as the other parties are concerned, the battle is won.

"This is a landmark settlement," said Ms. Cilevitz. "For this amount of private land to be given to a municipality, it's unheard of." 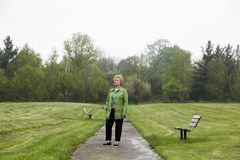 Condo plan for major downtown Toronto site may include a park
March 21, 2013 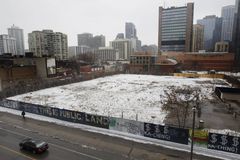 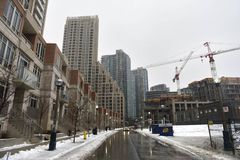