Five people were injured over the weekend in three separate violent incidents at busy Toronto locations.

At 8:36 p.m. on Saturday, police responded to a call about two men being stabbed at the entrance of Exhibition Place, in the area of Princes Boulevard and Newfoundland Road.

Police found the two victims, both 25, conscious and breathing. One victim went to the hospital with minor injuries, paramedics said. The second victim suffered serious but stable injuries and was treated at a trauma centre.

Later, at 1:20 a.m. on Sunday, police received a call about gunshots at Yonge-Dundas Square.

Police briefly shut down the Yonge-Dundas intersection to investigate.

And, late Sunday afternoon, police were called to Danforth Avenue and Main Street in the city's east end for a report of shots fired into a moving vehicle with two passengers.

The driver, a man in his 20s, was shot in his extremities and taken to a trauma centre in stable condition, paramedics said. Police said the passenger had no injuries.

No information on suspects is available in the three cases, said Constable Craig Brister, a police spokesman.

The double stabbing Saturday came shortly after the Toronto Caribbean Carnival's grand parade wound down at Exhibition Place, which drew an estimated 16,000 participants and one million spectators.

It's the third stabbing at the festival in three years, threatening the family friendly image that organizers have tried to promote.

Last year, two men were stabbed near the fountains at Exhibition Place as the parade wrapped up.

In 2014, a 14-year-old allegedly stabbed an 18-year-old man twice in the chest during an altercation along the parade route, sending the victim to hospital in critical condition. The boy was charged with attempted murder.

The number of incidents each year is "infinitesimal" given the event's magnitude, carnival spokesman Stephen Weir told The Globe and Mail last week.

Violence at the carnival has also triggered debate about the extent of policing at events celebrating communities that have been historically oppressed by law enforcement. 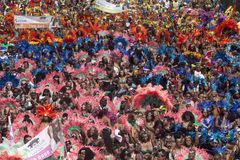