When you've got a sudden craving for sautéed duck feet, Kevin Sutton delivers it to your door.

Sutton is one of hundreds of bike couriers who ride Toronto's streets every day. He works part-time for Foodora, a delivery service that lets users order food online from hundreds of restaurants. The company now employs 500 delivery staff in Toronto and cyclists make up 75 per cent of its fleet in Canada, reflecting the surging consumer demand for "instant delivery" meals.

The job isn't easy. Sutton has to contend with Toronto's notorious motorists, erratic weather and his constant appetite. But he chooses his own hours while going to school and works up a healthy sweat.

For a biking enthusiast, there's no better gig. "I don't have a desk and the entire city is my office," Sutton says.

Do you get into a groove when biking or are you always on alert?

You get into a rhythm once you've been working long enough. I get so much exercise that the stress melts away. Near the end of your shifts, everything starts flowing together. I like Sundays, noon to seven. It's often nice out, kind of quiet and pretty steady. It's a relaxing way to end the week. I also know the roads really well, so I don't need a map to get to any addresses downtown. I just look at my pickups and drop-offs, and in my head, I'll mentally play it out.

Have you had any close calls?

I've had some close calls, but over all, it's getting better. There's more cycling infrastructure being put in place and more education programs, so drivers are becoming more aware. Dooring isn't the same issue because there are stronger laws in place. But some people aren't aware and distracted driving or walking can be an issue.

What improvements can be made in Toronto's cycling infrastructure?

Bloor Street is nice to ride through, but to have an actual lane there and not be worried about riding through cars, that would be great. But the amount of headway that we've made even in the past year or two has created a noticeable improvement. For example, the bike lanes on Richmond and Adelaide are great. I use the bike lanes 90 per cent of the time when they're on my routes. They give me peace of mind and security.

How has the courier market evolved in Toronto since you started?

When I started, the market wasn't quite as competitive as it is now, in terms of food delivery. Even with Foodora, when I joined, it had less than 20 riders. Now it's several hundred. The market has also expanded like crazy in the past few months. With the expansion, the company has become a community. There are a lot of riders out there and we relate to each other.

You've been delivering food for a year-and-a-half now. Which order stands out the most?

I remember picking up from California Sandwiches once. The delivery was pretty far and I had about over 50 pounds of food in my bag, so it weighed over twice my bike. When I picked it up, my bike just wanted to fall over. It was manageable, though, and made for a good uphill ride. You get in pretty good shape with this job.

I imagine delivering food all day can be tempting. What food makes you the hungriest?

All of it. When I've been out there for six hours already and I've maybe had a couple of Clif bars, all of the food smells good. It makes you look forward to when you can get a nice meal in you.

Have you delivered any strange meals?

I've had some deliveries of sautéed duck feet. It did actually smell pretty good, but it certainly wasn't my first choice. It smelled a lot more appetizing than you think. 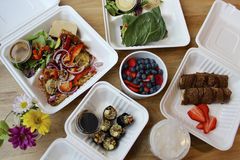 Giving up the guilt of not serving a home-cooked dinner: The draw of meal-delivery services
March 29, 2016 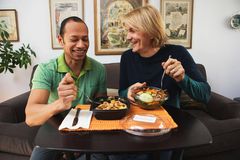 The rise of the instant-delivery lunch
April 5, 2016
Follow us on Twitter @globetoronto Opens in a new window
Report an error Editorial code of conduct
Due to technical reasons, we have temporarily removed commenting from our articles. We hope to have this fixed soon. Thank you for your patience. If you are looking to give feedback on our new site, please send it along to feedback@globeandmail.com. If you want to write a letter to the editor, please forward to letters@globeandmail.com.
Comments