Toronto Mayor Rob Ford and his councillor brother Doug Ford helped one of the world's largest commercial printers, RR Donnelley and Sons, lobby city staff about taking over part of the city's printing operations around the same time the Ford family's label business was negotiating to accept business referrals from Donnelley, a Globe and Mail investigation has found.

In June, 2011, Mayor Ford and his brother met with six officials from Donnelley Canada who were urging city staff to hand their company part of Toronto's $9-million printing operation. No one in the civil service was told that Donnelley – a Chicago-based Fortune 500 company – around that time was arranging to refer clients to the Ford family business, Deco Labels and Tags.

The relationship between Donnelley and Deco was detailed to Globe reporters in interviews by Leonard Rudner – who was a vice-president of sales and marketing for the Ford family's label business from 2010 to 2011. Mr. Rudner, a veteran label-industry executive, agreed to speak publicly on what he knew about the Fords' intermingling of their private business interests with their duties as elected officials because he was offended by a tape-recorded conversation reproduced in the Toronto Star in which Mayor Ford reportedly made an anti-Semitic remark.

Mr. Rudner, who is Jewish, said he was particularly upset with Councillor Ford, his former employer at Deco, and his unwillingness to disavow that remark publicly, or any of the other slurs the mayor is alleged to have used to describe black people, Italians, gays and Pakistanis.

"He's defending his brother, irrespective of what he does," Mr. Rudner said. "Doug is the biggest disappointment to me."

In his interviews with The Globe, Mr. Rudner detailed his roller coaster ride with the Ford family after he was hired to oversee the sales side of Deco in May, 2010, as the Fords planned their rise to power: how Doug Ford spoke openly about his plans to be premier of Ontario; how Doug Ford promised to introduce Mr. Rudner "to every CEO in the city" after he and his brother were elected; how shocked Mr. Rudner was that Toronto voters did not recognize Rob Ford's many failings during the 2010 campaign, which was largely run out of Deco's offices and offered Mr. Rudner a fly-on-the-wall vantage.

But most significantly, Mr. Rudner, 76, has pulled back the curtain on Deco Labels and Tags, revealing a portrait of two brothers who have eagerly engaged with clients and potential clients of their family business while serving in their capacity as elected officials.

The revelation that the mayor and Councillor Ford tried to help a potential business partner secure a city contract comes just weeks after The Globe revealed that the Fords repeatedly intervened with city staff on behalf of another major client of their label business. In 2011, the Fords arranged meetings with the most powerful bureaucrats in the city in an effort to help Apollo Health and Beauty Care, a beauty products company for which Deco has made labels, obtain a $2.5-million property tax grant, a stop sign designation and assistance with a building permit. The Fords' advocacy on behalf of Apollo has sparked several complaints to Toronto's Integrity Commissioner.

The Globe has cross-referenced Mr. Rudner's story with documents obtained under the Freedom of Information Act and found that the Donnelley official who lobbied the Fords and city staff also was negotiating a deal to pass on business to Deco.

The first meeting between Doug Ford and Donnelley that is captured by public records – the City of Toronto's lobbyist registry – was on May 3, 2011. Two Donnelley representatives, including the company's director of sourcing services, Barry Waddick, met with Councillor Ford. A little more than a month later, on June 9, 2011, the mayor joined Mr. Waddick and Councillor Ford for another meeting, according to the registry. The next week, the city's director of purchasing at the time, Lou Pagano, received a phone call from the mayor.

"I just got a call from Mayor Ford … he said to me that a supplier wants to meet to see how he can bid on printing contracts. I offered to meet with the supplier directly, but [the mayor] said that he wants to be there," Mr. Pagano wrote in a June 14, 2011, e-mail. The next day, Mr. Pagano was told to come to the mayor's office, where he was greeted by six representatives from Donnelley – including the president of RR Donnelley Canada, Allen Hallis, and Mr. Waddick – as well as Councillor Ford and Mayor Ford.

The city owns and operates printing presses and high-speed copiers, and the Donnelley officials said they had ideas about how it could reduce its printing costs.

"They also said that perhaps the City should consider outsourcing all the printing. Councillor Ford seemed to agree with them on that," Mr. Pagano wrote in an e-mail shortly after the meeting. At the time of this meeting, the Ford administration had initiated the "core services review" to find savings and outsourcing opportunities.

It was around this time, Mr. Rudner said, he was told he needed to be at Deco to give an important tour of the plant. The purpose, Mr. Rudner said, was for him and Randy Ford – the older brother of Rob and Doug who runs the manufacturing side of the business – to court two representatives from Donnelley, which was interested in partnering with Deco to refer clients who needed self-adhesive labels. If this arrangement were executed, it would be potentially lucrative for Deco, Mr. Rudner said, explaining that given Donnelley's size, Deco would effectively end up with a much larger sales force free of charge.

When the tour concluded, the four men discussed the next step, which was "formulating a plan" about who Donnelley should deal with at Deco when passing along business, Mr. Rudner said.

He said he did not know the exact date of the meeting, but that he believes it was in June, 2011. He kept a business card that was given to him by one of the Donnelley officials, Mr. Waddick, who also lobbied Councillor Ford, the mayor and city staff. Mr. Rudner provided The Globe with a copy of the business card.

One or two days after the meeting, Mr. Rudner briefed Doug Ford on the Donnelley tour, he said. "I think I did mention [to Doug Ford] that we had a very good meeting, that they were impressed with what they saw and that business could follow," Mr. Rudner said. Councillor Ford knew that the plant tour and potential referral of business were in the works, Mr. Rudner said.

Meanwhile, at city hall, the mayor was still helping Donnelley lobby city staff. Mayor Ford instructed Mr. Pagano to let him know when another meeting was scheduled for the city clerk's office – which oversees the city's printing – to hear out Donnelley, a request that Mr. Pagano obliged. On June 30, Mr. Pagano and the director of information management, Daphne Donaldson, sat down with five Donnelley officials, including Mr. Waddick, who had toured Deco's plant, and Mr. Hallis, the president of Donnelley Canada.

At that meeting, Mr. Hallis made a point of letting the bureaucrats know Mayor Ford had toured Donnelley's facilities, official minutes show. Donnelley wanted to do a strategic review of the city's entire printing operation and "look at the processes from start to finish," Mr. Hallis said, according to the meeting minutes.

The city has a standardized process for submitting what is known as an unsolicited proposal – which is what Donnelley was offering – as opposed to bidding on work that the city wants done, which is known as a request for proposal or RFP. The process, which requires companies to submit their idea through a website, is supposed to ensure transparency and fairness, and not allow companies an unfair advantage because of access to particular civil servants or councillors.

Mr. Pagano referred the Donnelley officials to the website for such proposals, the official meeting minutes show. Bureaucrats interviewed for this story said no one alerted them to Donnelley's dealings with Deco. Nothing came of Donnelley's lobbying, two civil servants close to the discussions said in interviews.

A few months after these meetings, Mr. Rudner resigned from Deco. His reasons were twofold, he said: He had developed peripheral neuropathy, a condition that has made it difficult for him to walk, and he had a poor working relationship with Randy Ford. By the time he left in October, Donnelley had not yet referred any clients to Deco, as discussed, although Mr. Rudner noted that it takes time for such partnerships to develop.

"Any time you entertain a new customer, it takes time, even after a plant tour," he said. "I didn't expect anything to happen the next morning, the next week or the next month." Neither the Fords, nor Donnelley, will say how much, if any, business the printing giant has referred to Deco.

Mr. Rudner said that, while he was at Deco, he had not seriously considered the appropriateness of the Fords involving themselves with Deco clients, or potential clients, that were seeking benefits from the city.

"You have to remember that, during the campaign and when they were elected, there was a sense of elation in the plant. It was nice to know that you're working for a company that's owned by the mayor," he said.

During the campaign, he said, Doug Ford told him, "'Once we're elected, I'm going to personally introduce you to every CEO in the city.'"

"What was the aim? It was obviously to bring in business," Mr. Rudner said.

More than 18 months after leaving Deco, Mr. Rudner alerted The Globe that Apollo, a client of Deco's, had received a tax grant from the city, and The Globe later determined through public documents that Mayor Ford and Councillor Ford had involved themselves in those grant discussions. Mr. Rudner has now agreed to be publicly identified as one of the newspaper's sources for that story.

Mr. Rudner said he never picked up any hints of racism from Rob Ford during the campaign or after his election, and the 76-year-old has developed a radar for prejudice. In the 1970s, he said, he was once told he was being turned down for a promotion because he was Jewish. He recalls having to restrain himself when a colleague told him their company had lost a contract because a competitor had "Jewed down" their bid.

He was initially so impressed with Doug Ford, he said, that it did not startle him when Mr. Ford pronounced on a business trip to the Fords' label plant in New Jersey exactly how lofty his political ambitions had become.

"And then he said, 'Len, I'm going to go one step further. I want to be premier of Ontario,' and he says, 'Hudak may win the next election, but I'm going to win the one after that.'" The trip took place in 2010, before Mr. Ford had been elected as a city councillor, Mr. Rudner said.

Five sources close to the Fords interviewed by The Globe have described Doug Ford speaking openly about his desire to become premier.

John Lorinc is a freelance reporter 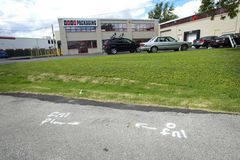 Councillors push for Ford conflict-of-interest probe to continue
May 13, 2014 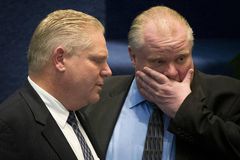 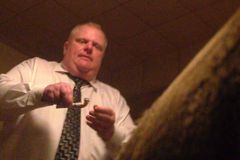 Follow Greg McArthur and Robyn Doolittle on Twitter @McarthurGreg @robyndoolittle
Report an error Editorial code of conduct
Due to technical reasons, we have temporarily removed commenting from our articles. We hope to have this fixed soon. Thank you for your patience. If you are looking to give feedback on our new site, please send it along to feedback@globeandmail.com. If you want to write a letter to the editor, please forward to letters@globeandmail.com.
Comments are closed