This story has 365 days, 22 Hours and three telephone digits.

The press gallery at City Hall has often grumbled about their lack of access to the mayor and this was setting up to be a big week. Not only would it mark the one-year anniversary of Mr. Ford's landslide election win but City Council was also scheduled to vote on a private garbage contract covering a large swath of the city, a key plank of Mr. Ford's election platform.

"There was a lady dressed up and she was screaming my name 'We got you Rob Ford, we got you,'" Mr. Ford said, recounting the incident that would end with a call to police. "And my daughter, she was scared so she went back in."

The mayor says he stepped into his van only to be hemmed in by the television crew. "I couldn't get out of my car," he said.

Eventually, the burly mayor heaved open the door and retreated into his house where he called 9-1-1.

"I didn't know who they were. Obviously I've had death threats."

The crew made haste before the police could question them.

And if Mr. Ford remains mystified by the whole encounter, he might want to click on CBC Television Tuesday night to clear things up. The network acknowledged Monday afternoon that a crew from the news parody show This Hour Has 22 Minutes waylaid the mayor early Monday morning just as they have done with Canadian politicians of every stripe over the past 18 years. That screaming woman was actually actress Mary Walsh reprising her role as Marg Delahunty, Princess Warrior. According to a press release, she was in Toronto to offer Mr. Ford some advice on reversing his sinking poll numbers.

"Many politicians have participated in these kinds of interviews," CBC spokesman Chris Ball said. "They have become a part of public life in Canada."

Politicians make frequent appearances on the show, generally playing along with the joke.

In 2008, 22 Minutes comedienne Geri Hall was handcuffed and detained by police when she professed her love for Prime Minister Stephen Harper during a press conference. Mr. Harper later granted her a one-on-one interview in which he slyly asked "Do you like handcuffs?"

Mr. Ball told The Globe and Mail the crew also wanted to ask the mayor a few questions about Movember, the annual event that encourages month-long mustache growth in support of men's health issues. Mr. Ball said the segment should air Tuesday night.

But even after he was informed of the light-hearted nature of the confrontation, Mr. Ford wasn't laughing.

"I'm open to games," he said. "But come to my private house early in the morning and ambush me? I think that crosses a line."

Mr. Ball noted that the program has blindsided numerous politicians over the years but couldn't say if its stable of comedians has ever cornered anyone outside their home.

And lest any other reporters get any ideas, Mr. Ford, in moment of simultaneous tenderness and menace, put other would-be comedy correspondents on notice.

"My kids and my wife are the closest things to me and I'll do anything to protect them. So I just hope someone else doesn't do that again because I don't want anything serious to happen."

Editor's note: An earlier version of this online article incorrectly identified the CBC Television show. This online version has been corrected. 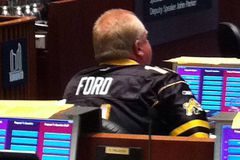 Mayor rejects use of police to clear protesters
October 23, 2011 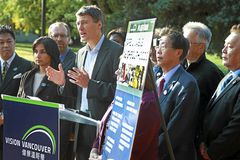 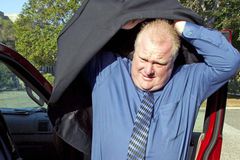