What was supposed to be a non-political, family-friendly barbecue — Toronto Mayor Rob Ford's Ford Fest event in Scarborough — instead erupted in a series of ugly confrontations Friday evening between Mayor Ford's supporters and protesters.

Thousands of people descended upon Scarborough's Thomson Memorial Park Friday for the 19th annual Ford Fest. Though the evening began uneventfully — with guests lining up in the hundreds for free hamburgers, and organizers running out of the 1,000 "Ford Fest" t-shirts even before the event's 6 p.m. start time — by about 7:30 p.m., there had already been several loud clashes, including reports that protesters had been assaulted, and had their signs torn up.

When the mayor — who is running for re-election in October — arrived at the park at about 6 p.m.,there was no sign that his support had diminished since the series of scandals in the past year including drug allegations, a police investigation, and a stint in rehab. A large crowd supporters gathered around his SUV chanting "Ford more years! Ford more years!" and followed him as he made his way to a tent to sign tshirts and pose for photographs.

But soon, the arrival of a small number of Ford protesters attracted notice in the crowd.

Mary Hynes, an activist who is running for council for a ward seat on council, was surrounded by about a dozen angry people after she challenged a Ford supporter. "We love Ford," they shouted at her as she listed off to a group of reporters the reasons why Mayor Ford shouldn't be re-elected.

Shortly after, Don Whittemore, 62, had to ask a bystander to call police after he said he was assaulted by an angry supporter. Mr. Whittemore, who said he arrived alone and is not affiliated with any political organization, wore a Pride flag draped across his shoulders and carried a pink umbrella — a reference to the Sugar Beach umbrellas that the mayor has railed against.

"This guy started shouting some rather uncomplimentary things to a certain segment of our population, so I turned around and confronted him," he said. "He hit me in the forehead, grabbed my hat, and they started pushing me, telling me to go home."

He said he was not hurt in the interaction, adding "the only thing that's hurt is my faith in my city."

And Brian Dematos, an LGBTQ activist, found himself along with a few of his friends surrounded after standing in the park with a sign reading "Don't drink the Kool-aid." As the crowd shouted and chanted, a few of them grabbed at his sign, ripping it at the corners. His friend, he said, had his entire sign, which read "Ford hates us", ripped up.

"A few guys tried to forcibly grab the signs and rip it. they kept continuing it ripping it and trashed the sign on the floor."

Poe Liberado, a spokesperson for Queeruption, a group of about a dozen activists that attended Ford Fest, said they went to the event to challenge Mr. Ford's stance on the LGBTQ community. ""We are not going to stand for Rob Ford to be pulling back our rights" she said.

Leading up to Friday, the event had become a source of controversy due to city rules that ban campaigning in public parks. The city sent three staff members to the event to ensure that no campaign literature was handed out, and the Ford campaign appeared to adhere to these rules. Even his speech, which lasted less than two minutes, he barely mentioned his campaign.

"This is a very, very humbling experience," he said. "From the Ford family to everyone here, thank you so much. I can't thank you enough." He ended his speech by saying "I can't wait to be here next year. Promises made, promises kept. I love you, Toronto."

Despite the disruptions, the vast majority of guests were there to show support for the embattled mayor.

Carol Tracey and Sheila Allen stood in line for over an hour to get a photo Mr. Ford.

"He's more handsome than in the pictures and on TV," Ms. Tracey said.

Ms. Allen said she supports the mayor because he's "true to the people" and that his private life doesn't bother her.

And Ottawa teen Devon Smith, who attended with his father, said he'd chose to spend his 17th birthday at Ford Fest.

"It's his birthday, his request, he wanted to meet the mayor," said his father, Kevin Smith, as they waited in line to get a shirt signed.

Mr. Smith said he's not concerned about the mayor's past, or being a bad role model.

Me and Rob: What it means to take a Ford selfie
July 25, 2014
Rob Ford Fest denied liquor licence, deemed not ‘municipally significant’
July 23, 2014 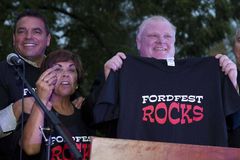 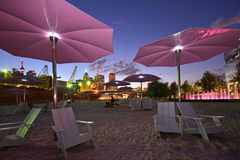