Toronto has repudiated nearly a decade of liberal-minded city-building, as a city sputtering through a low-wage economic recovery traded big ideas for a new mayor who promised to cut taxes, rip out streetcars and get tough with waste at City Hall.

Rob Ford, the right-wing councillor who few expected to win the mayoralty race when he entered it seven months ago, defeated George Smitherman in a resounding victory last night that was called eight minutes after the polls closed. Mr. Ford won by 11 points, capturing 47 per cent of the vote to Mr. Smitherman's 36 per cent, and led a wave of political change that crashed across the city and the Greater Toronto Area.

The size and scope of Mr. Ford's victory - he garnered more votes than David Miller did in 2003 or 2006 - contradicted every recent poll and confirmed that traditionally progressive Toronto is angry enough about taxes and spending to overlook the Etobicoke councillor's history of gaffes and scandals.

"This victory is a clear call from the taxpayers: Enough is enough and I want respect," the new mayor said. "And that's exactly what we're going to give them ... the people of Toronto are not divided. We are united."

Mr. Ford tapped into alienation and anger, recognizing early in the campaign that perceived city hall largesse and tax fatigue would define the campaign, not public transit. Guided by professional staff for the first time in his career, he stuck religiously to his now-famous slogan: Stop the Gravy Train.

That discipline paid off, allowing him to fend off an anybody-but-Ford movement that vaulted Mr. Smitherman into a tie for first place, according to polls that missed the mark by miles.

"Toronto is now open for business, ladies and gentlemen!" Mr. Ford cried after he entered the Toronto Congress Centre to a hero's welcome and the song Eye of the Tiger.

This wave of political change also washed away incumbents from one end of the metropolis to the other, with Sandra Bussin, Suzan Hall and Bill Saundercook among at least six veterans turfed from Toronto council. Etobicoke councillor Peter Milczyn eked out a narrow, late-night victory against Justin Di Ciano. In the suburbs, incumbent mayors fell in Vaughan, Oshawa, Burlington and Hamilton.

Even Mr. Ford's coat-tails turned out to be longer than expected: Several of the political outsiders he championed were among the 15 newcomers elected to council, including his older brother Doug, who is certain to play a key role at city hall.

The harsh realities of governing Canada's largest city after a gruelling, often nasty campaign couldn't dampen the euphoria at the Ford family home in Etobicoke where cheers and applause rang out when Mr. Ford, 41, was declared the mayor-elect.

Mr. Ford's mother, Diane, burst into tears as her youngest and eldest sons triumphed, while sister Kathy, also sobbing, pushed through the crush of well-wishers to bear hug her younger brother.

"To Rob and to his entire campaign team, I offer congratulations. Differences aside, as a Torontonian who loves my city I hope for your success, Rob," Mr. Smitherman said, addressing supporters at a club on the waterfront. He paused to quell boos as he congratulated his rival. "Toronto is too important - there are no boos tonight. We love our city."

Speaking at the Revival on College Street in his old Trinity-Spadina ward, Mr. Pantalone said he feels "fine."

"The people of Toronto have spoken and democracy is beautiful."

His supporters, he said, voted for him "with their heads held up high."

Mr. Pantalone spent much of the end of the campaign defending himself against Mr. Smitherman's "anyone but Ford" campaign, which painted votes for the former deputy mayor as votes supporting the Etobicoke councillor.

Mr. Pantalone said his 30-year political career is now over.

His seat in Ward 19 Trinity-Spadina, one of nine vacant spots, was won by Mike Layton, son of federal NDP leader and former city councillor Jack Layton.

Council's political complexion appeared has changed, but not as dramatically as the mayor's office.

At the outset, Toronto's 2010 match-up was billed as a heavyweight affair between Mr. Smitherman and John Tory, the former Ontario Progressive Conservative leader.

But Mr. Tory took a pass - twice, as it turned out - and the field widened to include Adam Giambrone, Rocco Rossi, Giorgio Mammoliti, Sarah Thomson and Mr. Ford, the last to join the campaign on March 25.

One by one, the candidates fell. In February, Mr. Giambrone succumbed to a sex scandal; in July, Mr. Mammoliti gave up when he realized he couldn't win; in September Ms. Thomson quit to back Mr. Smitherman and bolster the anti-Ford movement; and in October, Mr. Rossi dropped out because of his dismal polling performance.

In the end the ballot question became: Ford, yes or no? On Monday night, Toronto's electorate overwhelming voted yes.

With reports from Jeff Gray, Adrian Morrow and Phillipe Devos

Right-wing tide sweeps Toronto mayoralty race but not rest of Ontario
October 25, 2010
Opinion
Ford raged against the machine, and now runs it
October 26, 2010 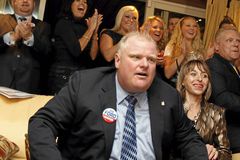 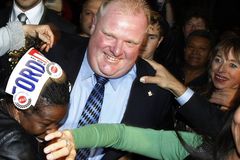 Smitherman has lost more than the mayor's chair
October 25, 2010 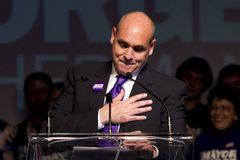 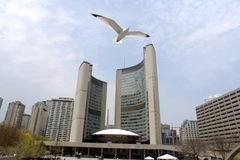 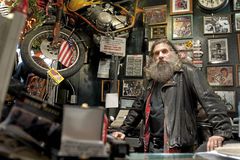 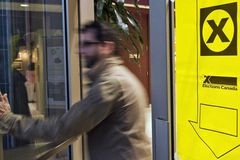 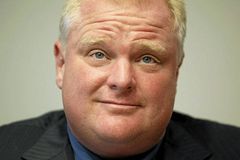