The seeds of Rob Ford's latest troubles were planted on a boozy Valentine's night in 1999, when he threw his hands in the air and told the Miami police officer who pulled him over: "Go ahead, take me to jail."

Eleven years later, Mr. Ford's drunk driving conviction - and the way he fumbled the revelation - have sprouted into the gravest threats yet to the Etobicoke councillor's improbable run for mayor.

Until now, Mr. Ford has been an unstoppable everyman. Despite his history of gaffes and buffoonery, he has marched up the polls with a rallying cry against taxes and waste, flummoxing his more polished opponents.

Although his hard-core supporters won't budge, the incident could turn off undecided voters and send his campaign into freefall.

"This really is a train wreck," said Myer Siemiatycki, a municipal politics expert at Ryerson University. "I think for many Torontonians, this will be a game-changer."

Mr. Ford's bad Thursday began when he called a 9 a.m. news conference to explain a story in a local newspaper that said the candidate had forgotten until reminded of it that he beat a charge of possessing a marijuana cigarette.

"I completely forgot about it until you mentioned it right now. You think I'm BSing you, but I'm not. It completely, totally slipped my mind," he is quoted as telling the newspaper.

Mr. Ford blamed what else happened in the wee hours of Feb. 15, 1999, for his absent-mindedness.

"The reason I forgot about the marijuana charge ... is because that same evening, I was charged with failing to give a breath sample," he told reporters.

But court documents and an affidavit from the Miami-Dade police officer who made the arrest show Mr. Ford was charged with driving under the influence of alcohol or drugs, which Mr. Ford's Toronto lawyer later confirmed.

He paid a $664.75 fine, was barred from driving in Florida for one year and ordered to complete 50 hours of community service, which his campaign said he served by volunteering with the Toronto Express, the private summer football team he had been coaching since 1997.

Ron Singer, who shared coaching duties with Mr. Ford, said he didn't know a thing about the sentence until this week. Neither did Doug Ford, the candidate's brother and campaign manager.

Mr. Ford's brush with Florida law happened when he was 29, about a year-and-a-half before he was first elected to city council.

He and Renata, then his fiancée, now his wife, had enjoyed a romantic night out.

"I went for Valentine's with my wife, we had a couple of bottles of wine. I wasn't drunk, but maybe I shouldn't have been driving," Mr. Ford said.

(Asked again if it was bottles or glasses, Mr. Ford replied, "not bottles ... we shared a couple of litres of wine.")

Officer Timothy C. Marks pulled Mr. Ford over for driving with his headlights off.

"The def[endant]approached me and took all of his money and threw it to the ground. The def was acting nervous," the officer wrote. "When the defendant spoke to me I could smell a strong odor [sic]of an alcoholic beverage on his breath. His eyes were bloodshot."

When the officer searched Mr. Ford, he found a "marijuana joint cigarette" in his back pocket. The charge related to it was later dropped.

"I am not perfect. I have never claimed to be perfect," Mr. Ford said. "But I believe this is a great city that needs strong leadership from a mayor who combines business experience and experience on city council."

This is the latest controversy to dog Mr. Ford, who was either in the lead or a tie with George Smitherman, the former deputy premier, in the most recent large public polls.

Earlier in the campaign, Mr. Ford was caught on tape urging an ill man to score painkillers on the street.

As a councillor, he said only gays and needle users are likely to get AIDS, that hard-working "Orientals" are "taking over," and that although his heart bleeds when cyclists are killed "it's their own fault at the end of the day."

He also drunkenly berated his seatmates at a Toronto Maple Leafs game in 2006, something he lied about before admitting the truth and apologizing.

"It's not so much the individual pieces," John Wright, senior vice-president of pollster Ipsos-Reid, said. "I think it's the string of them, I think it's the momentum of them. I think people are starting to ask themselves, 'Is this the kind of guy who we want to run our city?' "

With files from Celia Donnelly 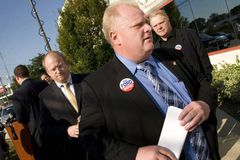 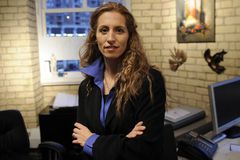 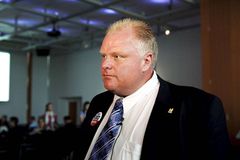