Long-simmering tension between Toronto Mayor Rob Ford and the city's police chief reached a new level of animosity with the mayor daring Chief Bill Blair on Thursday to "arrest me."

The mayor's comments – including a demand for the chief to apologize "to the taxpayers" – are the latest salvo after months of friction between Chief Blair and Mr. Ford and his brother, Councillor Doug Ford.

"I want to see how much money he spent on following me around," Mr. Ford said Thursday, when asked by reporters about remarks made by Chief Blair about a police investigation targeting the mayor. "If he's going to arrest me, arrest me. I have done nothing wrong and he's wasted millions of dollars."

On Thursday, Councillor Ford submitted a formal complaint against the police chief to a provincial watchdog, contending Chief Blair had mischaracterized an earlier complaint the councillor had submitted.

The Fords and Chief Blair have been publicly at odds since October, when the chief revealed police have a copy of a video that appears to show the mayor smoking crack cocaine. Chief Blair told reporters he was "disappointed" and police were investigating Mr. Ford. That investigation, called Project Brazen 2, resulted in the arrest of Mr. Ford's friend Alessandro Lisi for drug trafficking and extortion related to the crack video. In November, Mayor Ford admitted to smoking crack cocaine.

A police document on Project Brazen 2 revealed that investigators had tracked the mayor and Mr. Lisi for months across the city using undercover officers and a surveillance aircraft, and documented their meetings at all hours of the day and night in often bizarre locations, including empty parking lots and gas stations.

"If anyone owes an apology, he owes an apology to the taxpayers for not telling people how much he spent, when he's coming in crying poor in my office saying 'I don't have any money,' " Mr. Ford said, referring to the chief's requests for more officers.

He later added that the investigation, which police say remains ongoing, came up "with nothing. Coming up with me urinating in a parking lot? Coming up with an empty vodka bottle?" Both of those are references to incidents witnessed by investigators and described in the police document.

Police spokesman Mark Pugash would not address the mayor's remarks. "Our position is quite simple: We don't comment on ongoing criminal investigations," he said.

After a few hostile words in the fall – with the Fords accusing the chief of "playing politics" over the video – tensions appeared to die down for several months. But they flared again this week. It was revealed that the Office of the Independent Police Review Director is probing a complaint of bias that Councillor Ford had submitted against Chief Blair in the fall. Then Wednesday, Chief Blair told reporters that after Mr. Lisi's arrest, the 35-year-old had threatened officers, saying "your guy is going to get his." That threat, the chief claimed, appeared to foreshadow the complaint that was submitted by the mayor's brother.

The councillor, who is running his brother's re-election campaign, called the chief's comments "suspicious," and alleged they were timed to coincide with former radio personality John Tory's announcement this week that he'll run for mayor. Councillor Ford cited as evidence a fishing trip that Chief Blair took with Toronto Police Services Board member Andy Pringle over two years ago. The Police Services Board is the arm's-length civilian agency that oversees the police and to which Chief Blair is accountable.

"Put the dots together," Councillor Ford said. "Andy Pringle, the chief and John Tory are all good buddies."

Mr. Pringle was Mr. Tory's chief of staff for 18 months when the latter was leader of the Ontario Progressive Conservative Party, and will raise money for the Tory mayoral campaign. Councillor Ford is calling on Mr. Pringle to step down from the Police Services Board.

But Mr. Pringle denied any wrongdoing Thursday, saying the fishing trip was approved by the chair of the police board. "The bottom line is it was open, above board," he said.

"Torontonians deserve better," he said in a statement. "While mayors across Canada are focused on building transit and attracting jobs, Doug and Rob Ford are focused on fighting the police chief. I am proud to support the chief."

Further exacerbating tensions between Rob Ford and Chief Blair was a separate video posted to YouTube last month of the mayor at the Steak Queen restaurant, rambling in Jamaican patois and using sexually explicit language to describe the chief. Mr. Ford, who vowed to quit drugs and alcohol last year, has since broken that vow by admitting he'd been drinking when the video was filmed.

This week, Chief Blair finally responded to that video, calling it "deeply offensive."

But Mr. Ford, who routinely refuses to answer questions about the Steak Queen video, said he has no plans to apologize to the chief. "There's nothing illegal. I can go out, and I chose to do that with my friends," he said. "I did nothing illegal at Steak Queen." 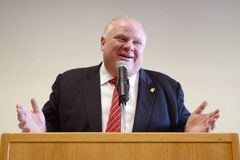 Ford dodges question on whether he has used illegal drugs since November
February 25, 2014 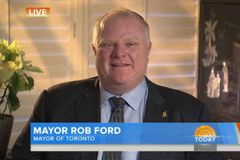