Railway lines, abattoirs, a parking lot, two homely bridges, and an overhead highway that bears a sooty rush of traffic. This is a partial list of the indignities that have been inflicted on Fort York, the spot where the town of York was founded in 1793.

The 17-hectare site lies near the centre of downtown, and for 200 years has stood in the way of the city's smoke-belching, pork-slaughtering growth. Now it is at the heart of a newly emerging city – the western downtown, populated by carless young office workers and their pugs. And the fort finally has the public face it deserves, in the form of a 24,000-square-foot Visitor Centre. It's designed to educate tourists and Torontonians about the 1813 Battle of York, when British, local and First Nations combatants fought to repel a U.S. invasion, helping create a sense of Canada as a nation.

Unfortunately, it isn't quite finished. Like so much of Toronto's public realm in the post-Rob Ford era, the centre is well-conceived but underfunded. Its design, by Vancouver's Patkau Architects and Toronto's Kearns Mancini, has only been partially executed.

Still, this is a sensitive and powerful work of architecture. It speaks to the layers of history embedded here, and adding an artful new layer of 21st-century city building.

The centre is part building, part landscape. It is a long bar that runs east-west along the site's southern boundary, roughly where the shoreline of Lake Ontario lay when the fort was established in 1793. You approach from the old lake bed, now a neighbourhood of new condo towers, and walk between very tall columns that hold up the Gardiner Expressway.

The expressway imposes on the site, a clear symbol of how little 20th-century Toronto cared about its colonial history. Soon after the fort passed from military control to the city in 1903, the city allowed slaughterhouses to built on both ends of the site, and initially planned to run a streetcar line right through the middle of it, demolishing three buildings. In the 1950s, there were plans to route the Gardiner through the site, and Metro Chairman Fred Gardiner suggested moving the entire fort as a way to "save" it from that imposition.

Coming to the fort today, you can sense the lost topography as well as the site's military and industrial past. The building appears as a long rampart of rectangular panels, made from steel that has acquired an even patina of rust. A few of the panels appear to be rotated upward, on massive (but non-functioning) hinges, to reveal glass doors, windows and a grand outdoor staircase.

The building, a long bar, marks the former shoreline of Lake Ontario, and faces the elevated expressway like a piece of infrastructure. Photo: Tom Arban

This front facade has an infrastructural heft that stands up to the context. Its use of weathering steel, a material used most famously by American sculptor Richard Serra, is exactly right: Its rust-infused surface is, as detailed by the architects, both tough and dignified. It holds its own against the massive concrete columns that support the Gardiner, and it’s a bold counterpoint to the mediocre condos across the street.

The Visitor Centre is the first major Toronto project by Patkau Architects. The Vancouver firm, led by John and Patricia Patkau, has a well-earned reputation among Canada’s leading designers. Here they have made serious architecture from a tight budget and what John Patkau described to me as “a very challenging design problem, because of the complexity of the site.” The centre eschews fine details and goes for a few urbanistic and symbolic moves, to powerful effect.

The building is long and linear; its west end houses offices for city and museum staff, and the east end holds galleries and a long foyer, lit by stripes of daylight cutting between the steel panels and thick slabs of interior wall. The concrete-floored spaces, including a Class A exhibit space, are elegantly proportioned and precisely detailed. The foyer is designed to host public events, generating some revenue and also giving people a reason to explore the area.

The foyer connects to a café and a series of galleries, meant to set the scene for visitors before they approach the historic fort itself. To get out to the historic site, you walk up along a 70-metre-long ramp that switches back on itself. Eventually, it will be be lined by an interactive installation about the 1813 Battle of York. 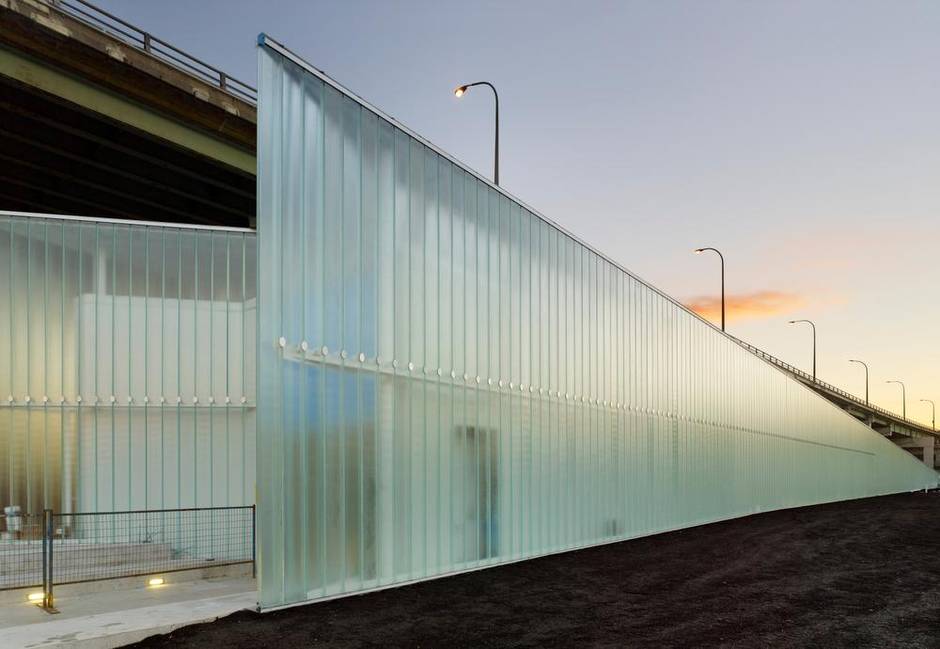 The upper half of the centre, clad in channel glass, sits on Garrison Common, an open space next to the fort. Photo: Tom Arban Arban

This is architecture as time machine. You begin in gangly 21st-century Toronto and move upward and back through the centuries. The top of the ramp deposits you on Garrison Common, a green space that abuts the fort. The top of the Visitor Centre emerges from the ground as a wedge-shaped mass of pale-blue cast glass, chiselled and otherworldly.

Here you can see clearly how much of the design is unfinished for lack of funds. At its eastern end, the steel facade peters out into dirt; Patkau and Kearns Mancini imagined another 37 panels of steel here, to match the existing 54. This would make the building, as John Patkau told me, better able to stand up to the mass of the Gardiner.

And its front yard, brilliantly imagined by landscape architect Janet Rosenberg as an “events dock,” is similarly incomplete; the design will extend piers of wood into a bay of waving grasses. This outdoor space, under the canopy of the highway, will be spectacular.

Once the necessary money appears, that is. The Fort York Foundation has raised about one-third of a planned $6-million toward the project’s $25-million total. The Visitor Centre opened in September anyway, with financing from all three levels of government and from developers. Another $4-million in donations is needed to complete the building, the landscape and permanent installations within the centre. 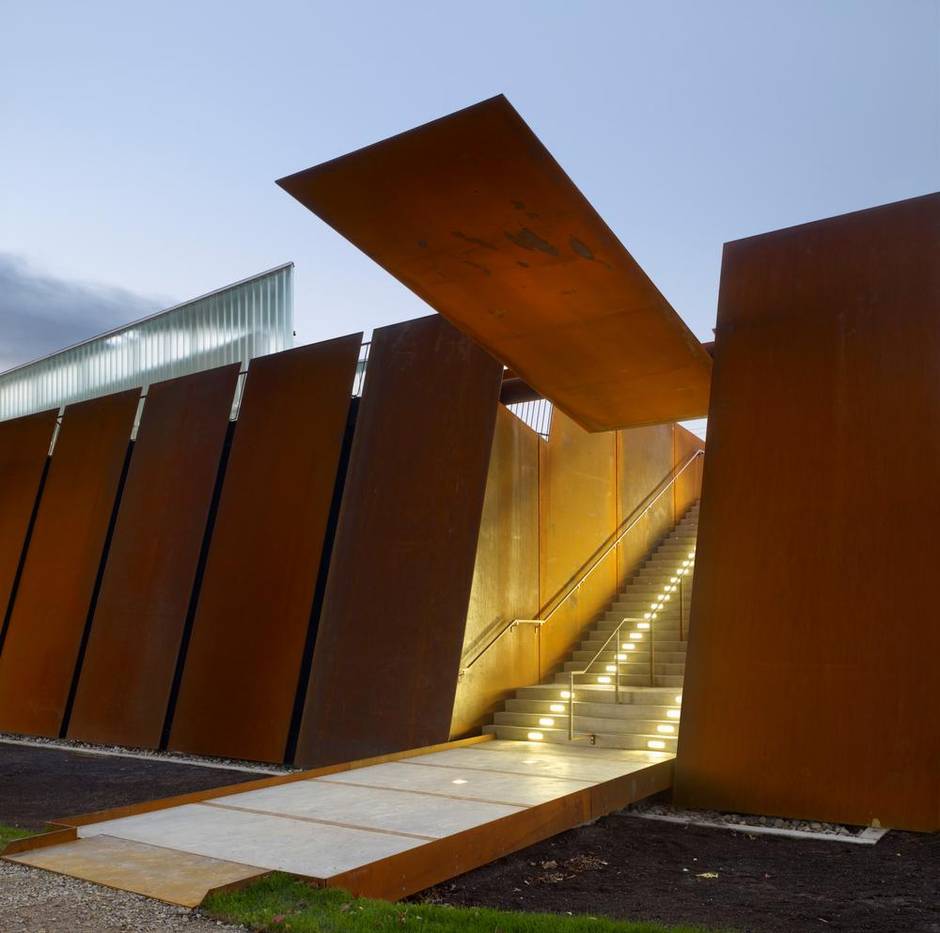 An outdoor staircase runs from the front of the centre to the level of the fort above. Photo: Tom Arban

It’s time for more Torontonians to chip in. This is the city’s most important historic site – and the return on investment for open space is obvious. The fort site is part of a planned network of parks linking the 19th-century street grid with the waterfront. The high-rise neighbourhoods to the south (at Front and Bathurst streets), east (CityPlace) and north (Liberty Village) house tens of thousands of people and badly need pedestrian connections and public spaces. (The city is building an excellent new park next door to the fort site.) New development will add thousands more condo units within walking distance of the site.

A new pedestrian bridge to Garrison Common from the north, over the rail tracks, should have been finished by now. Instead, Mayor Rob Ford and his allies on City Council tried to kill it. They succeeded only in delaying it and cutting its budget, so the bridge will open years late, in diminished form. The story of Fort York itself should have a happier ending, and I hope it comes soon.