Nearly four years after an explosion in an underground hydro vault tore through an east-end Toronto high rise and forced 1,000 residents out of their homes, potentially hundreds of apartment buildings throughout the city don't have essential safety equipment that could prevent such a blast.

"It was like a bomb went off," Romelda Morson said of the explosion that left her homeless for two months. "The whole building shook."

A heat detector could have prevented the fiery blast at 2 Secord Ave. on July 20, 2008, that left nine fire fighters injured, the Office of the Fire Marshal says.

"It was the fact that they didn't have this detection device in that vault that the fire was able to burn undetected for a considerable period of time before the explosion occurred," said Carol Gravelle, a spokeswoman for the Office of the Fire Marshal.

While all new buildings going up across the city must have heat or smoke detectors installed, the hydro utility and Toronto Fire are still working out a formal process to get all of the older buildings inspected.

Toronto has about 1,400 high-rise apartment buildings, according to the Municipal Property Assessment Corporation, and almost all of them were built before heat detectors were required. But no one – not Toronto Hydro, Toronto Fire or the Greater Toronto Apartment Association – can confirm how many buildings don't have the devices.

"We're not 100 per cent sure, because each building varies, so the fire code for each building would be different," Hydro spokesperson Tanya Bruckmueller said.

The residents of 2 Secord Ave. have filed a class action lawsuit against Toronto Hydro seeking $30-million for the blast that displaced them and left them with no parking or laundry when they returned to their soot-covered homes.

Lawyer Ted Charney, who represents the tenants, said he's worried that despite changes to the Ontario Fire Code in 1992 that require the devices to be installed, many older buildings may have slipped through the cracks.

In April, Mr. Justice George Strathy of the Ontario Superior Court upheld a ruling that said the public utility was being "evasive" by refusing to hand over internal investigations of the blast or even admit if any investigation was done. Toronto Hydro will not comment on the proceedings.

The public utility says installing heat detectors is the landlord's responsibility because the vaults are on private property – even though Hydro holds the keys and owns the equipment inside. It has launched an awareness campaign, sending letters to property managers about the issue.

"We own the equipment and the key to the door for safety reasons, but other than that, the apartment or commercial building owner is responsible for getting a contractor or an inspector in and determining what they need in [the vault]," Ms. Bruckmueller said.

The public utility says it has advised more than 1,000 customers that they may need to install the devices and that the utility can arrange access to the vaults.

The Greater Toronto Apartment Association urged its member landlords and property owners more than a year ago to contact Hydro to arrange access to their vaults so that a heat detector can be installed.

"Toronto Hydro notes that most buildings in Toronto likely do not have this and therefore they have launched a campaign to ensure compliance," a GTAA memo reads.

Toronto Hydro says more than half of the property owners have responded, either to request access or to confirm that a heat detector is in place.

Steven Weinriev, a building manager for Park Property Management, says all 50 of the Toronto buildings his company owns have heat detectors in their vaults.

The difficulty, Mr. Weinriev said, is getting Toronto Hydro to provide access to the vaults for the annual inspections.

"It's difficult because they have other emergencies, they only have so many crews," he said. "We may make a time, but it's not guaranteed. So then the technician ends up waiting and waiting and waiting, and that can be a problem."

The local city councillor, Janet Davis, tried to help those made homeless by the massive 2008 explosion, which she said lifted the fire truck parked in front of the building off the ground and flattened 150 cars in the underground parking lot.

A couple of years earlier, she said, she had to deal with a similar issue caused by a water leak in a hydro vault at a Toronto Community Housing Corp. building on Lumsden Avenue that resulted in power outages and a much smaller explosion and fire. She said confusion about who was responsible for the vault was clearly part of the problem.

"I don't care who is responsible, whether it's Hydro or the landlord, either have to ensure that the appropriate detectors are in place and that they meet the requirements of the building and fire code," she said.

"For the hundreds of thousands of people who live in high-rise buildings, we don't know whether or not they're safe from this kind of explosion," she said.

Toronto Hydro expects to meet with the Greater Toronto Apartment Association during the summer to work out issues around vault access. 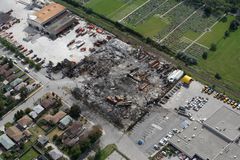