A Toronto resident has added to the mayor's pigskin problems by filing a new complaint with integrity commissioner Janet Leiper over allegations Rob Ford runs his football teams with city resources.

Her submission includes information from a Globe and Mail article published Wednesday, which reported at least three members of the mayor's staff have helped support the mayor's football team during business hours.

Two listed their city-issued cell phones as contacts on the Facebook page for the Rexdale Raiders, Mr. Ford's summer football team. A third, a former quarterback for the University of Toronto, was photographed helping the mayor lead practice at Don Bosco Catholic Secondary School this week.

Ms. MacDonald, a founding editor of the left-leaning online publication Rabble.ca and a volunteer on Joe Pantalone's mayoral campaign, said she feels Mr. Ford's work with young football players is "admirable," but added that he has an obligation to adhere to council's code of conduct. "Respecting the taxpayer means respecting the rules," she said.

The new complaint came as Councillor Doug Ford continued to vigorously defend his brother's use of taxpayer-funded staff to support his football teams.

The councillor said repeatedly on talk radio that the special assistants in the mayor's office who help with his brother's coaching duties do so on a volunteer basis, something he promised they would attest to publicly.

"We'll get these two folks out, they'll clear the air and then I'd like to see what they say after that," he said.

But the mayor's office shot down that idea, saying it is not their policy to ask junior staff members to speak to the media.

Mark Towhey, the mayor's chief of staff, said Thursday that Councillor Ford does not speak for his brother.

"Doug Ford is a councillor for Ward 2. He represents Ward 2," Mr. Towhey said. "He does not speak for the mayor or the Mayor's Office."

In an official statement Wednesday, the mayor's office praised volunteerism in general, but did not say employees were volunteering their time on the gridiron.

"As Mayor of Toronto, Mayor Ford is accompanied by one or more of his staff members at most times, in order to assist him in his official duties," the statement said. "Staff in the Mayor's Office are selected for their jobs based on their skills, experience, education and commitment to making Toronto a better city."

Ms. MacDonald, who last year filed a complaint with the integrity commissioner over the mayor's office expenses, cited in her new complaint details from Mr. Ford's testimony in a Toronto court last week, during which he was questioned by lawyer Clayton Ruby about his understanding of municipal conflict of interest law and other council rules.

She also included images and texts documenting Mr. Ford's fundraising activities for his football foundation, which have been the source of most of his recent headaches. An August, 2010, report by the integrity commissioner criticized Mr. Ford for using city resources – staff time and letterhead – for his fundraising activities. That report led to the conflict of interest allegation now being considered by an Ontario judge.

Ms. MacDonald insisted she is not piling on with this latest complaint against a mayor who seemed so embattled Wednesday that his high school football players moved to shield him from media questions after a practice.

John Lorinc is a freelancer. 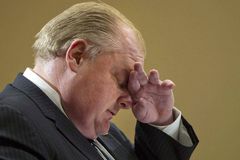