Allegations of alcohol and drug use, abusive behaviour toward staff and vulgar sexual remarks have prompted critics and former allies alike to cut ties with the Toronto Mayor Rob Ford and to call for his resignation.

Here's a look at just some of the mostly groups who have distanced themselves from the mayor in the past few weeks:

After Mayor Ford's admission Thursday that he might have driven while intoxicated, Iceberg Vodka (the brand of alcohol that Mr. Ford allegedly asked staffers to buy for him) issued a statement condemning the mayor's statement.

"Iceberg Vodka wholeheartedly believes that 'if you drink, don't drive.' Driving under the influence of alcohol is unacceptable and inexcusable behaviour."

A group of Toronto city councillors are preparing for a special council session Friday, where they plan to peel away many of the mayor's powers, including his budget and staff, and delegating many of his powers to the deputy mayor. Earlier this week, council voted 37-6 in favour of a symbolic motion asking Mr. Ford to temporarily step aside.

After Mr. Ford refused to step aside, many councillors were seen turning their backs in protest to Mayor Ford in the council chamber this week each time he stood up to speak.

Toronto's CFL team on Thursday distanced themselves from Mr. Ford, an outspoken Argos fan, after the mayor wore the team's blue jersey while making vulgar sexual remarks and admitting to driving while intoxicated on live television.

In a series of tweets on the @Toronto Argos account Thursday, the team tweeted that the Mayor's situation and leadership "is unseemly at best," and that it was "disappointing" to see Mr. Ford donning the team's jersey given the organization's work with youth and bullying prevention.

Ron Barbaro, co-chair of the Santa Claus Parade, sent a letter to Mayor Ford's chief of staff Earl Provost Tuesday, urging Mayor Ford to change his mind about walking in this year's parade.

"Our request is simple, we know the Mayor loves the Parade, but for this year let's avoid this distraction and put the focus back on Santa and Mrs. Claus," the letter reads.

MADD issued a statement Thursday, shortly after Mayor Ford admitted to reporters at City Hall that he may have driven while intoxicated in the past. "I might have had some drinks and driven," he said on his way into a council meeting.

"Driving under the influence of alcohol is inexcusable behaviour for any individual, let alone an elected official who is held to a higher standard and expected to set an example for the community and constituents," the statement reads.

Newstalk 1010, the station on which Mr. Ford and his brother Councillor Doug Ford hosted their radio show 'The City,' cut its ties with the mayor last week.

The radio station issued a statement Nov. 8 saying that "Newstalk 1010, Mayor Ford and Councillor Ford have mutually determined to conclude broadcasts of The City, ending with last week's show."

Toronto Region Board of Trade

Chief Blair's announcement in late October that police have a copy of the crack video, and the release of police documents showing Mayor Ford having suspicious meetings with an alleged drug dealer were enough to prompt the Toronto Region Board of Trade on Nov. 1 to urge Mr. Ford to take a leave of absence.

"Putting Toronto first means the Mayor must be able to effectively address our city's key priorities such as attracting investment, jobs and talent from around the world. He must be the city's marketer-in-chief," the organization's statement reads.

"We believe the current situation must be a distraction for the Mayor and therefore it is not possible to put Toronto first. It is our view that Mayor Ford cannot effectively fulfill these duties and others while this cloud hangs over him and the city." 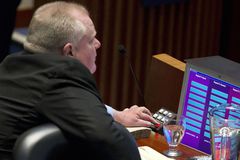 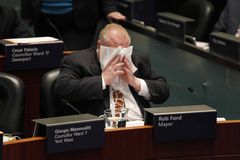 Public editor: Why comments are closed on some Rob Ford stories and not others
November 13, 2013
Follow Ann Hui on Twitter @annhui
Report an error Editorial code of conduct
Due to technical reasons, we have temporarily removed commenting from our articles. We hope to have this fixed soon. Thank you for your patience. If you are looking to give feedback on our new site, please send it along to feedback@globeandmail.com. If you want to write a letter to the editor, please forward to letters@globeandmail.com.
Comments are closed