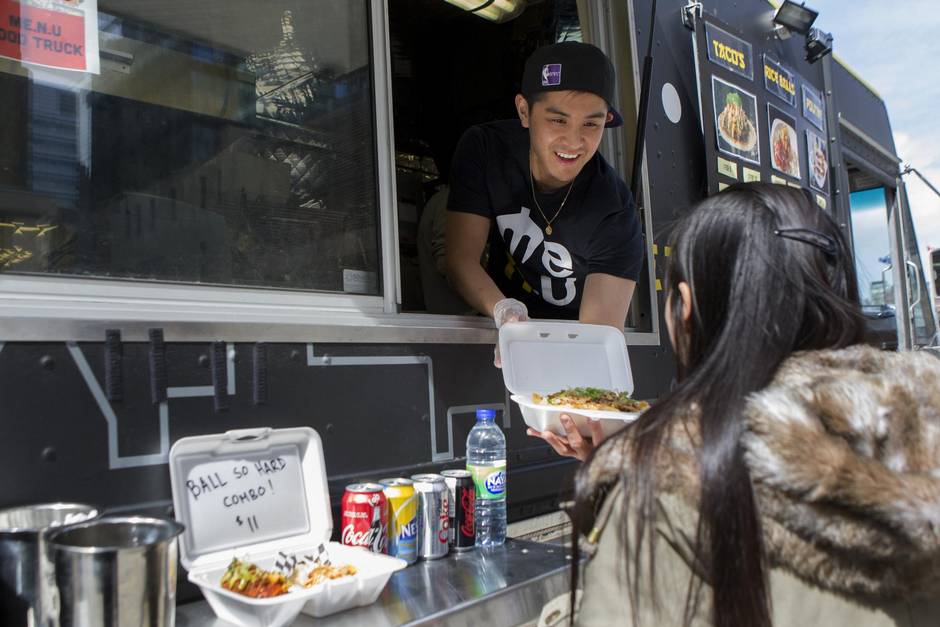 Bryan Siu-Chong says he’s cautiously optimistic the city will come to a solution on food trucks that works for everyone. (Photos by Chris Young for The Globe and Mail)

When you step inside Bryan Siu-Chong and Allen Tan’s “Me.n.u” food truck on University Avenue, this is what you’ll see: a refrigerator stocked with garnishes for their “Asian fusion” dishes – dishes such as kimchi pulled pork poutine and satay chicken roti; a counter covered with plastic squeeze bottles of Korean barbecue sauce; and a giant speaker from which they blasted loud hip hop one recent afternoon – to attract a growing lineup outside, and to bob their heads to as they prepped.

But tucked beneath the dashboard is something unexpected. That’s where they keep a yellow “Meter-Man,” a measuring tool normally used by engineers and surveyors on building projects. But Mr. Tan and Mr. Siu-Chong have a different purpose for it: They keep it to stay on the right side of city laws.

According to food-truck owners, the tool – which the pair use to abide by one of the city’s long list of rules – represents the worst of what they describe as a rat’s nest of bureaucracy. A ban on operating within 50 metres of a restaurant, the owners say, is the millstone keeping them down. It’s also key to answering the question asked by Mr. Siu-Chong that afternoon in his truck: “There’s street food everywhere,” he said, pointing to the hawker stalls in Asia, and the booming food-truck scenes of Los Angeles, Portland, Ore., and even Hamilton. “Why shouldn’t Toronto have it?”

One year ago, Toronto city council passed a slew of reforms to allow, for the first time, roaming food trucks. After the disastrous “A La Carte” program – which saw vendors mired in excessive and expensive red tape – the decision was seen as a reset for the city’s rocky relationship with street food. The decision inspired hopes for a revolution.

It never came. And, depending on an upcoming decision at city council, it may never happen.

“It started off as a revolution. It ended with a whimper,” said Councillor Glenn De Baeremaeker. 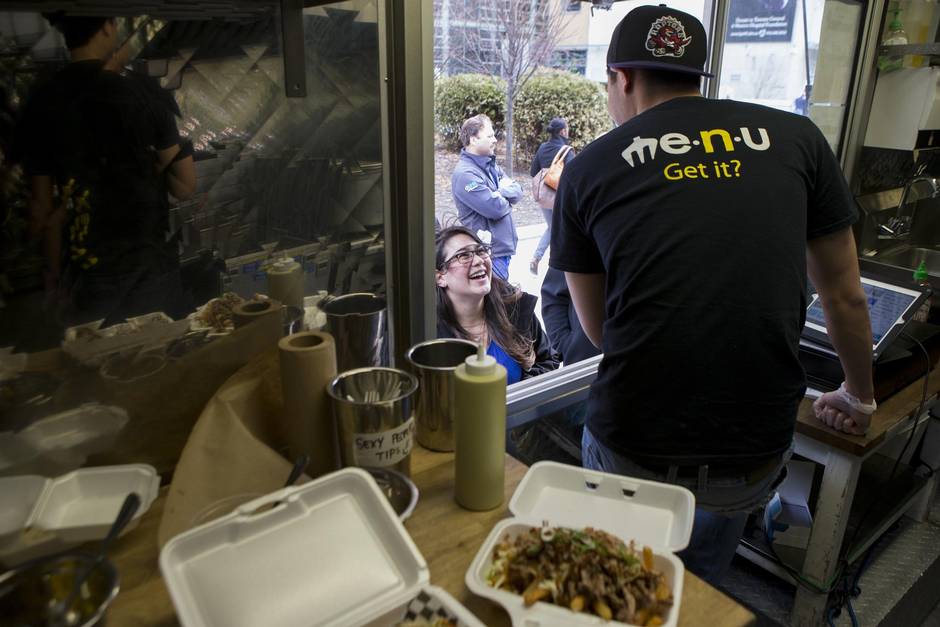 After the city passed new rules last year, Mr. Siu-Chong and Mr. Tan lined up to purchase the new $5,000 curbside vending permit. They soon realized they were one of the few – the majority of truck owners decided the rules were still too restrictive. Only 17 of 195 street-food vendors have since bought a permit.

On a recent sunny Thursday, only two trucks were operating in the entire city. By comparison, there were 36 trucks operating that same day in Vancouver and 22 in Boston. Even sleepy Ottawa had nine.

What’s separating Toronto from an exploding street-food scene, truck owners say, is exactly 50 metres. The city’s licensing committee is set to review its food-truck policy next week, and staff are recommending loosening some of last year’s restrictions – but leaving in place the 50-metre rule, which restaurant owners say is needed to protect them from loss of business.

“The 50-metre exclusion zone has essentially banned trucks from the downtown area,” said restaurant and truck owner Zane Caplansky. “Unless that gets changed, no matter what other rules you relax, you will not see food trucks.” 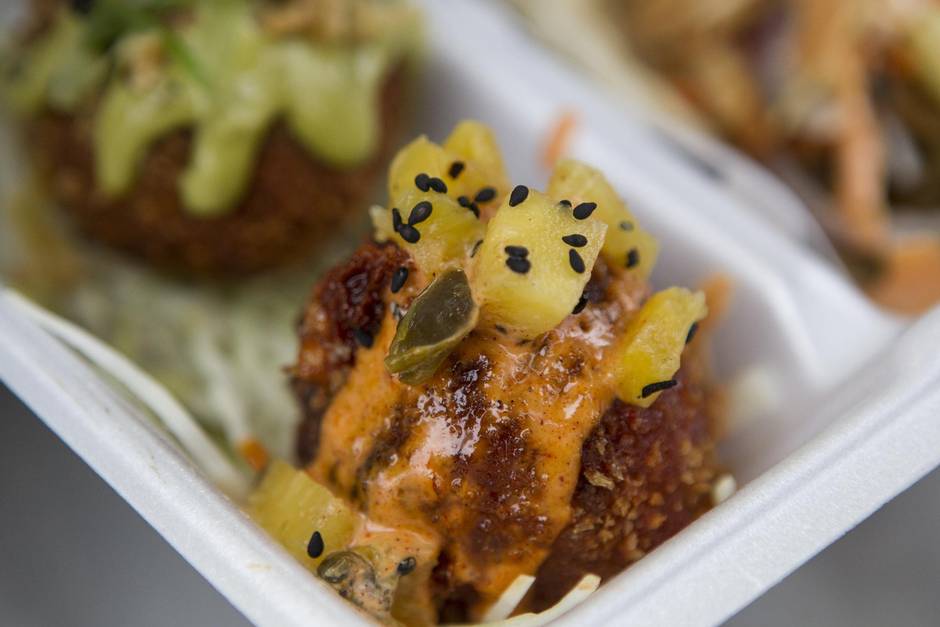 When they found the spot where they park most days now – on University Avenue near College – they took the Meter-Man out to the front door of the Swiss Chalet across the street. From there, they wheeled it in a straight line across University, watching the counter click forward as they walked. When the counter clicked past 169 feet – roughly 51 metres – they were overjoyed.

This, Mr. Siu-Chong said, is one of only a few spots they’ve found downtown with a decent amount of foot traffic. And if a car or a delivery truck is already parked there, that can ruin their day.

Curbalicious owner Brittney Pawlick – who sells comfort food such as falafel, with a focus on local ingredients – did not purchase a permit because of the 50-metre rule, and opts instead to operate at private events. Such events have largely fuelled the city’s boom in food-truck culture in recent years.

But organizers often charge vendor fees upward of $1,000 a day, and even scheduled food-truck events – such as one in the financial district last year – can throw up unexpected hurdles, such as last-minute road construction.

People think Toronto is a first-class city, but it’s so sad that they cannot find the answer to such a simple problem as food trucks.
Brittney Pawlick, Curbalicious food truck

Ms. Pawlick, who spent over $55,000 to purchase and customize a former Snap-on tool truck two years ago, said that after all of her expenses – vendor fees, rent for a kitchen, utility bills and employee wages – “we’re still trying to get out of the hole.” For her, a $5,000 roaming permit just doesn’t make sense.

At least three trucks have shut down between last year’s season and this one, owners say. “People think Toronto is a first-class city, but it’s so sad that they cannot find the answer to such a simple problem as food trucks,” Ms. Pawlick said. “It really makes you question what is going on at city council.”

City staff say the 50-metre rule is necessary to balance the interests of restaurants with food trucks, arguing it’s already a compromise between truck owners, who wanted zero metres, and restaurant owners, who asked for 250 metres. Most other cities in North America have limits somewhere between 15 metres (Seattle) and an even more restrictive 90 metres (Boston, but there are also designated food-truck sites there).

Tony Elenis, president of the Ontario Restaurant Hotel and Motel Association, said it’s still too early to see whether trucks have hurt business, but wants the 50-metre rule maintained to ensure “an even playing field,” given the rent and property tax costs for restaurants.

“We’re not against food trucks, we just want to protect brick-and-mortar restaurants,” he said.

And while truck owners have argued the two aren’t necessarily competing, Mr. Elenis dismissed this. 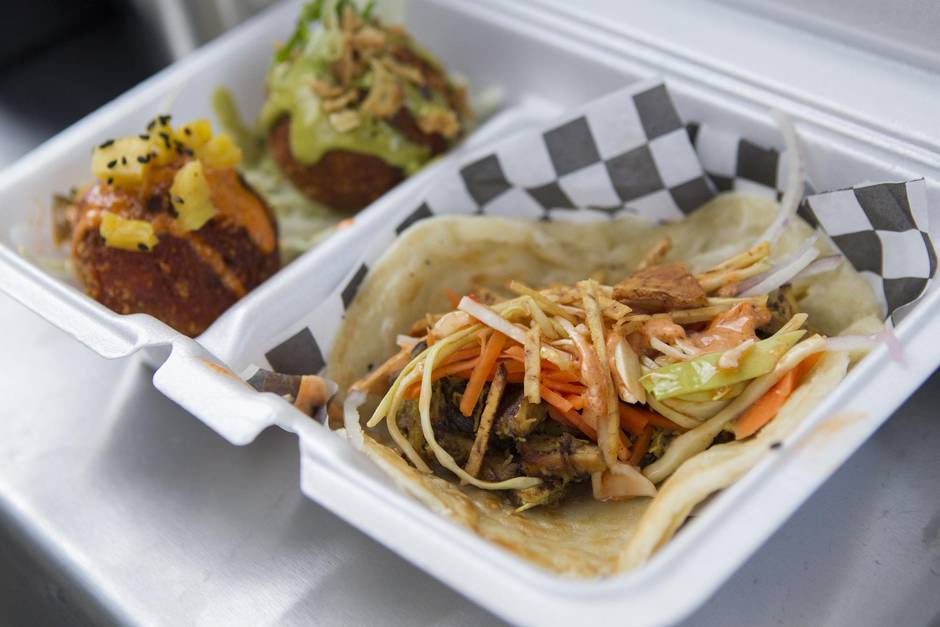 The 'Ball So Hard Combo.'

“A lunch is a lunch, a dinner is a dinner,” he said. “If you eat lunch at a food truck, that’s a lunch that a brick-and-mortar would not have.”

Councillor Gord Perks also argued that restaurants should be protected. “If you’re willing to make a permanent investment in the city and pay taxes as a property owner, you have a bigger stake than someone who isn’t,” he said.

But Mr. Caplansky said neither of these arguments hold up. He’d like the rule changed to 15 metres.

“If food trucks put restaurants out of business, wouldn’t we know that from the experiences of food trucks in New York, Portland, Chicago, or Los Angeles, where restaurants are thriving?” he asked.

He said trucks can serve as culinary “incubators,” giving enterprising young chefs the opportunity to innovate and add diversity to local food cultures. He pointed to examples in Toronto, such as the owners of Gourmet Gringos and Hogtown Smoke, who have gone on to open restaurants.

In other cities such as Vancouver, what started as a single Tacofino truck has expanded into multiple locations and a restaurant with daily lineups out the door. And the opposite has happened, too, with restaurant owners such as Vikram Vij opening trucks to expand their brands.

Mr. Caplansky, who opened his truck after the success of his namesake deli, also disputed the argument that restaurants have a bigger stake in their communities, pointing to the rental fees truck owners pay for the professional kitchen spaces they use to prep.

A lunch is a lunch, a dinner is a dinner. If you eat lunch at a food truck, that’s a lunch that a brick-and-mortar would not have.
Tony Elenis, Ontario Restaurant Hotel and Motel Association

After the licensing committee votes on food trucks next week, the issue will go to city council for debate. And, given the election of fresh faces to city hall since the last time the issue was debated, both sides have been busy making their case.

Mr. Caplansky, who started the Toronto Food Truck Alliance and counts among his supporters Mayor John Tory, has been meeting with councillors – including a few who have started tweeting with the hashtag #freethefoodtrucks.

But at least a few more – including Mike Layton and Joe Cressy – have indicated they plan on siding with Mr. Perks.

Meanwhile, Mr. Siu-Chong said he’s cautiously optimistic the city will come to a solution that works for everyone. Until then, he and Mr. Tan are supplementing their curbside income by catering and operating at private events. They also talk about wanting a restaurant one day, and setting up franchise locations.

But first, they have to get through the lunch rush.

With the music blaring and the line outside growing that afternoon, the inside of the truck – clad entirely with stainless steel – began to feel like a giant, greasy disco ball.

“Hey, man,” was Mr. Siu-Chong’s standard greeting with each customer, before shouting back orders to his staff. “Behind! Behind! Behind!” his cooks called out to avoid bumping into one another. “Apparently that’s what they say in kitchens,” one of the cooks said over his shoulder.

Around the same time, two hot-dog stands just down the street were fighting lunch crowds, too. Both of those had lineups of their own. 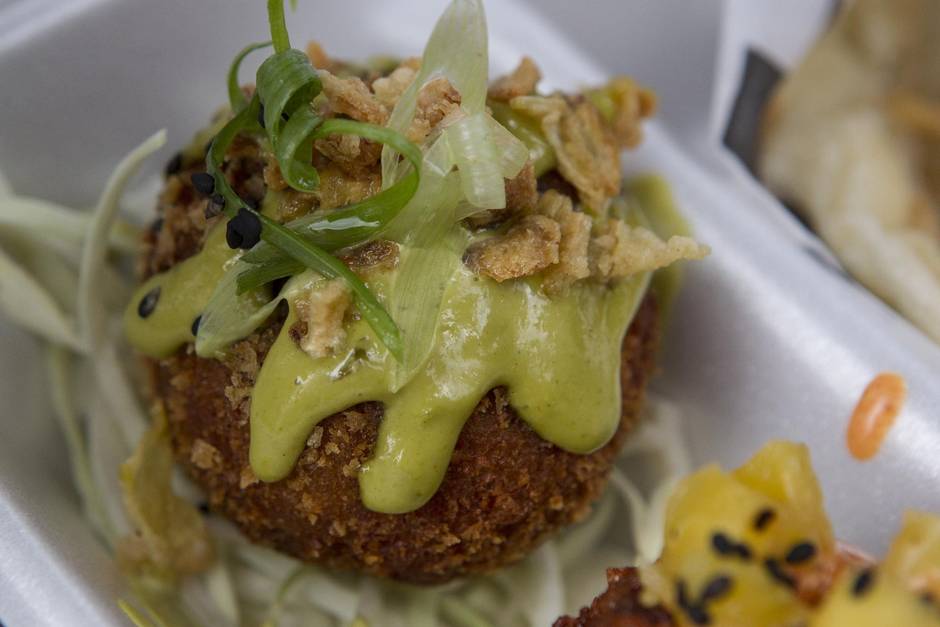 With warmer weather in the city comes the start of food-truck season. Now that most mobile vendors are coming out of hibernation, here are a few resources to help you find your favourite trucks, wherever they are.

Available as a website and an app, except this one also offers localized editions for other Canadian cities. Just don’t fixate too much when seeing that Vancouver has 30-plus trucks open on a given day. streetfoodapp.com

Co-founded by the food writer Suresh Doss and Sid Friedman of the Ontario Food Truck Association, their site adds a dash of food-truck advocacy to the prerequisite listings of province-wide events and openings. ontariostreetfood.com

(Tip: If in doubt about a specific truck, seek out their Facebook or Twitter page for its most up-to-date location.)