With just over a month before Toronto hosts this year's WorldPride celebrations, the festival's organizers have announced that the Pride Toronto 2014 International Grand Marshal will be Georgian human rights activist Anna Rekhviashvili.

Born in Tbilisi, Georgia, Ms. Rekhviashvili is both a national and international advocate for lesbian, gay, bisexual, transgender, queer and intersex rights and works as a community director at Identoba, the country's largest LGBT organization.

She helped organize Georgia's International Day Against Homophobia and Transphobia in Tbilisi last May, which was violently disrupted by orthodox priests and anti-gay protesters who view homosexuality as a sin. The event, which was meant to be a peaceful protest, left 17 people injured, some of whom were police officers.

"Over the last three years, me and the institution that I work for, we tried to organize something small publicly to start talking about LGBTQI rights, and we've faced a lot of challenges and a lot of aggression," Ms. Rekhviashvili told The Globe and Mail.

"In that sense, being a member of WorldPride is a different experience to see how you can publicly speak of the issues you actually want to speak about and how it can be possible in particular spaces."

Selected by the Global Human Rights for Queers: What OUT is About program, Ms. Rekhviashvili will act as a global ambassador and representative of lesbian, gay, bisexual, transsexual, transgender, intersex, queer, questioning, two-spirited and allies communities throughout the city's 10-day festival, which is set to begin on June 20. It's the fourth WorldPride event and the first in North America (and coincides with the annual Pride Toronto).

The 25-year-old Georgia native will lead the WorldPride 2014 Parade on June 29 alongside all seven of Pride Toronto's former grand marshals.

Some of Pride Toronto's past grand marshals include Rosanna Flamer-Caldera, the executive director of the Sri-Lanka based non-profit LGBT rights organization Equal Ground; Victor Mukasa, a founding member of Sexual Minorities Uganda, an organization that works toward achieving full legal and social equality for Uganda's LGBT community; and last year's grand marshal, Marcela Romero, the regional co-ordinator for the Latin American and Caribbean Network of Transgender People.

"There's a great number of people who are worthy of recognition and who are showing great courage in the battle against transphobia and homophobia, so it's not really an easy choice," said Kevin Beaulieu, the executive director of WorldPride Toronto.

Mr. Beaulieu added that the demonstration Ms. Rekhviashvili organized last May and the perseverance she and her organization showed in the face of violence made her an obvious standout for the honour. "That was an act of courage and bravery that brought her and her group to our attention and was worthy of recognition," he said.

"We want to help share that story and acquaint people here with what's going on in other parts of the world," he said.

Ms. Rekhviashvili said she is looking forward to her visit to Canada and the opportunity to enjoy the festival while taking part in discussions about LGBT rights.

"I really want to meet other experts internationally and discuss their issues and learn from their experiences," she said. "It's a big thing for me, so I'm actually really happy."

The announcement comes a day before Friday's rainbow flag-raising at City Hall, which is in recognition of the 10th anniversary of the International Day Against Homophobia and Transphobia. 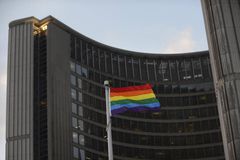