If the past 12 months of Toronto’s culinary scene were to be encapsulated in a school yearbook, Amy Rosen’s new cookbook Toronto Cooks, a collection of 103 recipes from 48 restaurants across the city, would fit the bill.

The freshmen class would be Drake One Fifty and Geraldine, which opened last year; New York-based Café Boulud and Momofuku Milk Bar would be the exchange students; and the decades-old restaurants, such as Allen’s and 360 at the CN Tower, would be the faculty.

“Years ago, you wouldn’t be able to put a book like this together,” Ms. Rosen says. “There are just so many amazing and diverse restaurants here now.”

Recipes run the gamut from Indian to Italian, French to Thai, touching on trends that hit Toronto in the past year, such as an influx of Middle Eastern flavours, doughnuts, burgers and octopus.

Five chefs from the book talk about what their recipes say about Toronto’s cuisine right now. 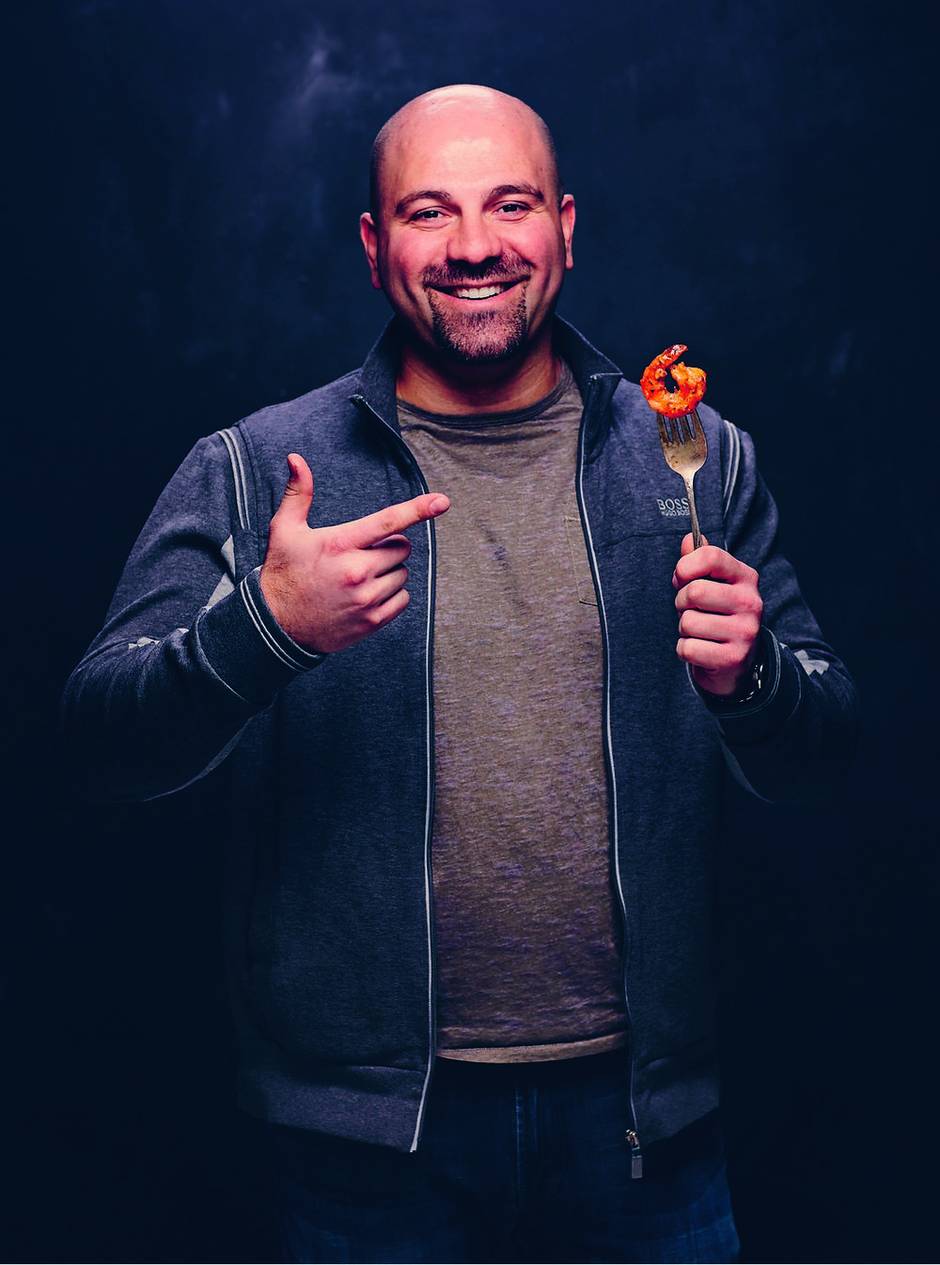 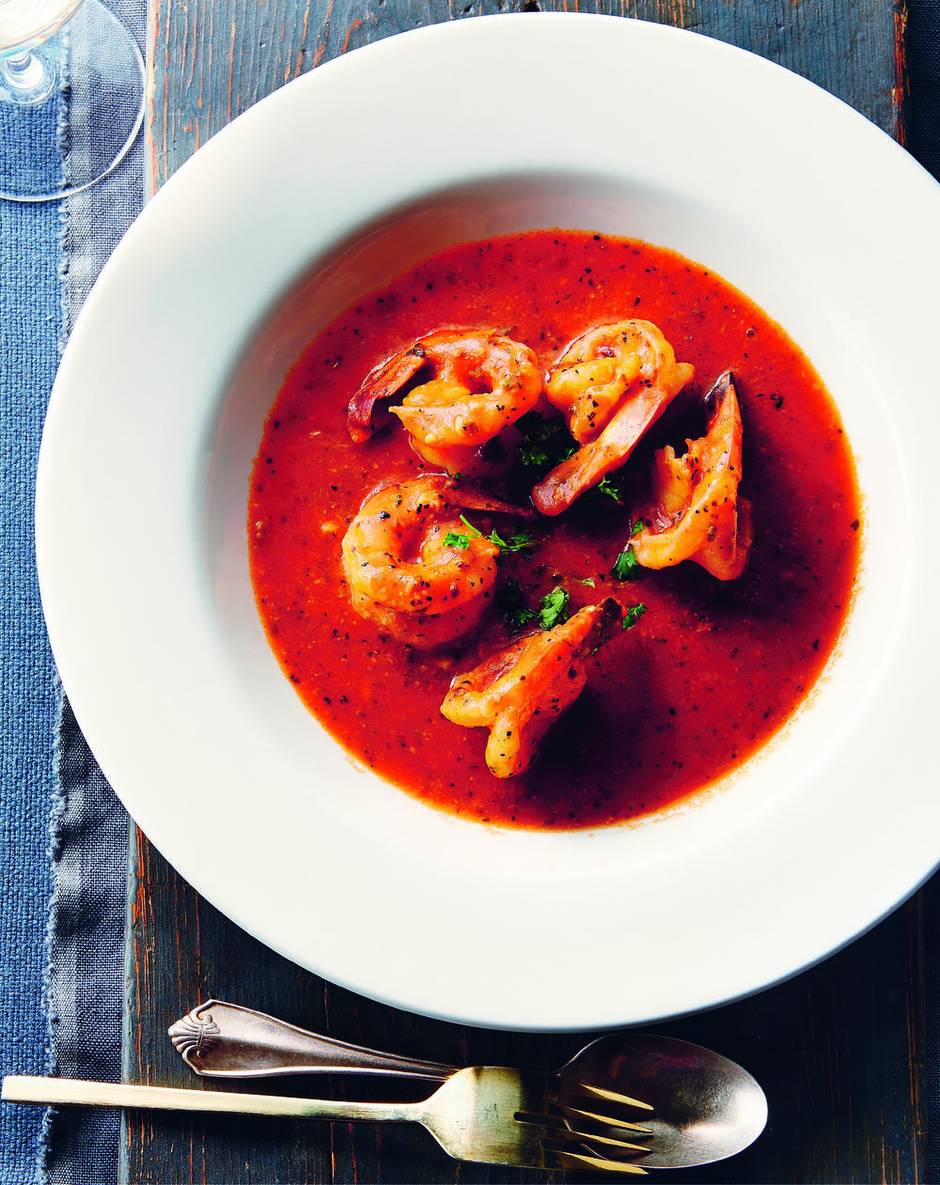 On the second wave of Middle Eastern and Mediterranean restaurants in Toronto:

“A few years ago it was sushi and last year there were a lot of Indian restaurants opening. I guess it’s a trend of healthy, fresh and just delicious food, and it’s hard to be healthier than Mediterranean food. A lot of people are going vegan or vegetarian and there are so many options in Middle Eastern cuisine that fit that. Hummus is high in protein and has the good fat, and you can use it to dip anything.

“For example, when I make a sandwich for my kids, I’ll brush the bread with hummus instead of butter. It’s simple food that’s fresh and I think that is what makes a restaurant successful. There are a lot of multicultural foodies now who are more adventurous but, at the same time, our food is comforting, uncomplicated and easy-to-make. When we first opened our Yonge location, a friend of mine said he’d never tried Middle Eastern food and was more of a steak guy. I said we have that, but just formed differently. He’s been a regular ever since.” 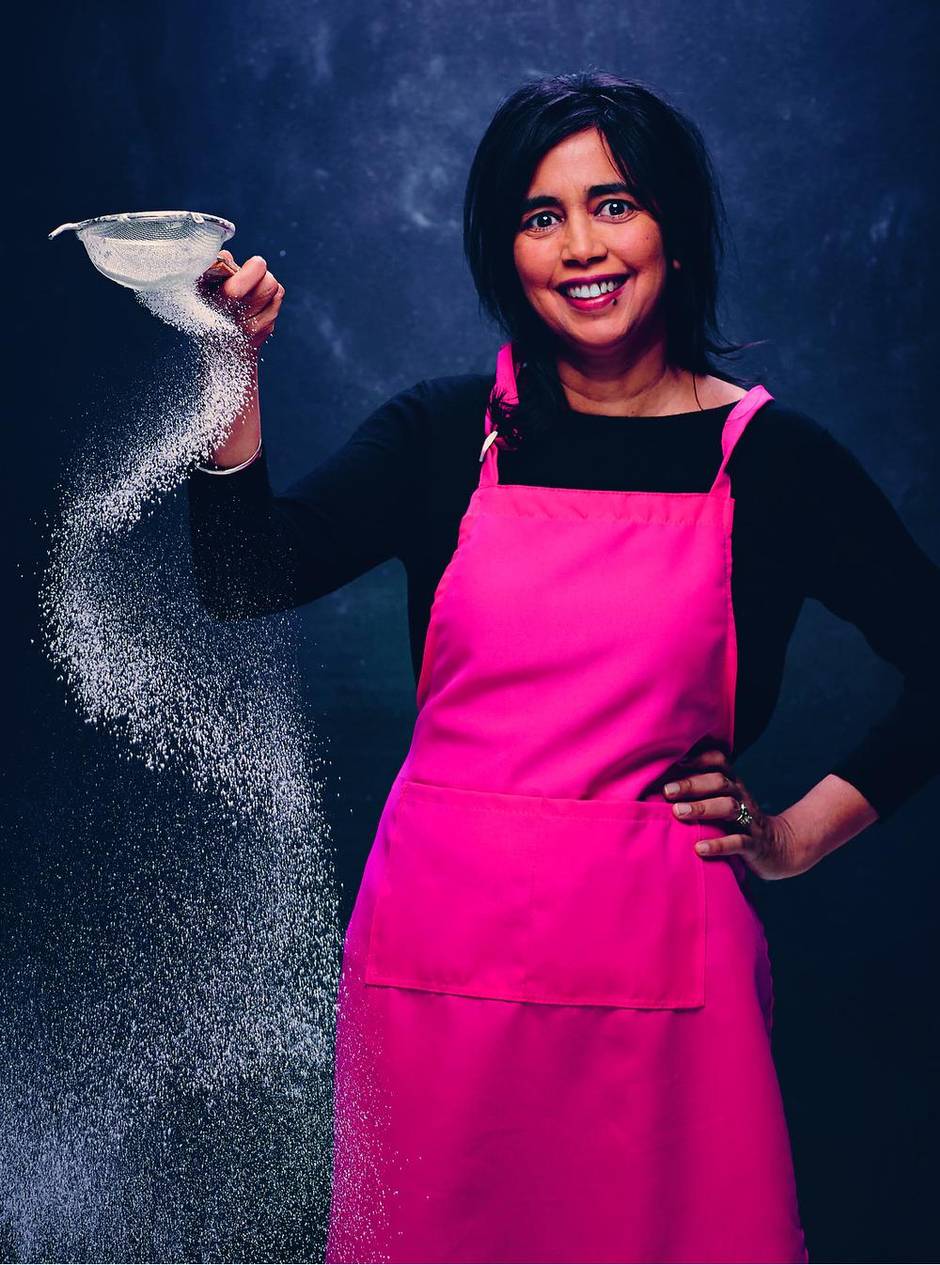 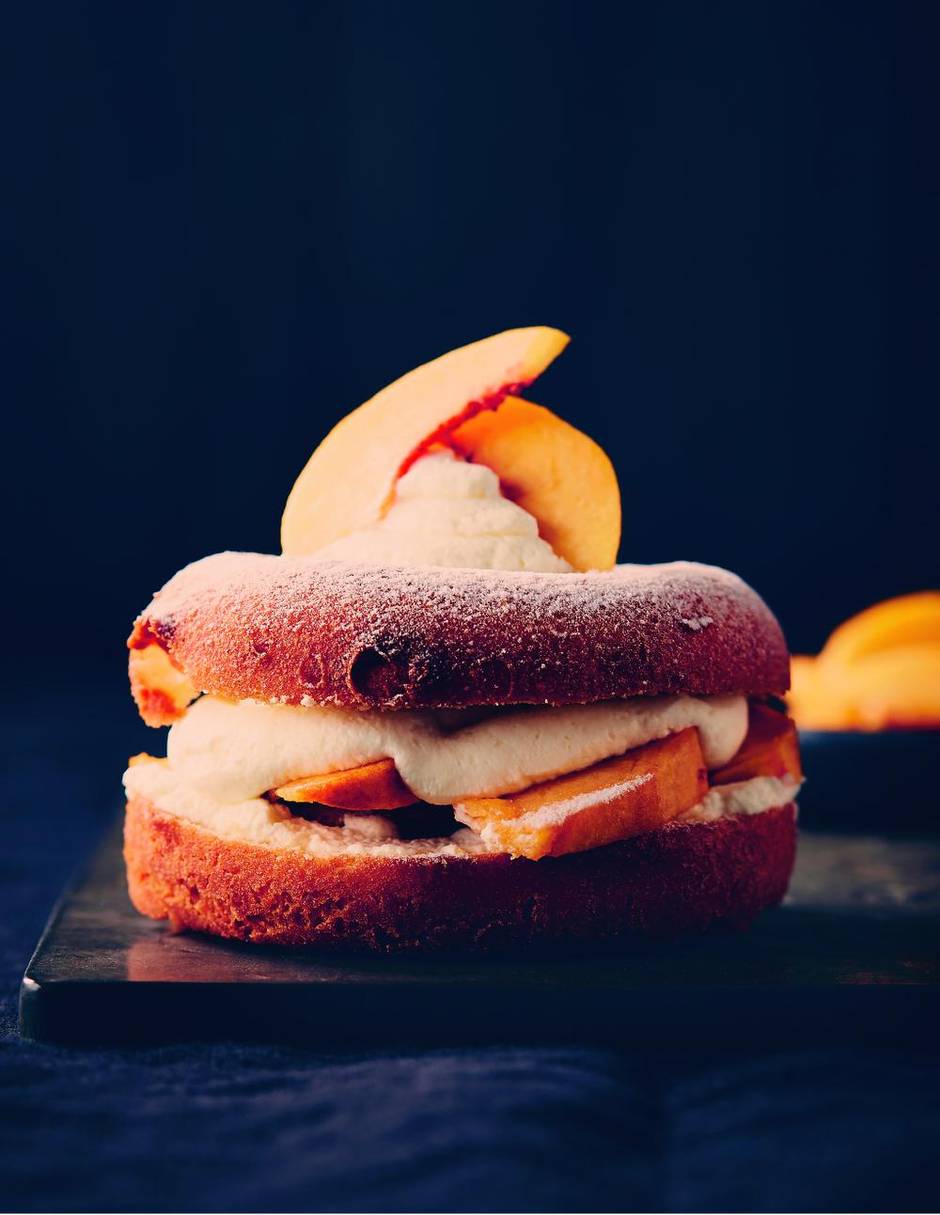 On doughnuts and the influence of food television:

“Peach shortcakes reflect us using seasonal, fresh ingredients while the maple-bacon is more of the trend you see a lot now. People had cupcakes and wanted something different. I think the timing was right when we opened in Calgary three years ago, when people wanted more creativity and sophistication in these products. We were on Food Network shows where people got to see inside the kitchens, and those airings made the demand for us to open in other cities like Toronto … People are going to indulge anyways, but they’ve also now gone back to the basics and making things from scratch, so we make the jelly and have taken out the preservatives [to] try to make it a bit healthier.

“Everyone has made cupcakes at some point, but we tried to demystify doughnuts and the influence of reality TV, and the Food Network instilled confidence in people that they can make doughnuts at home. People travel for food, and now go to the places they see on TV.” 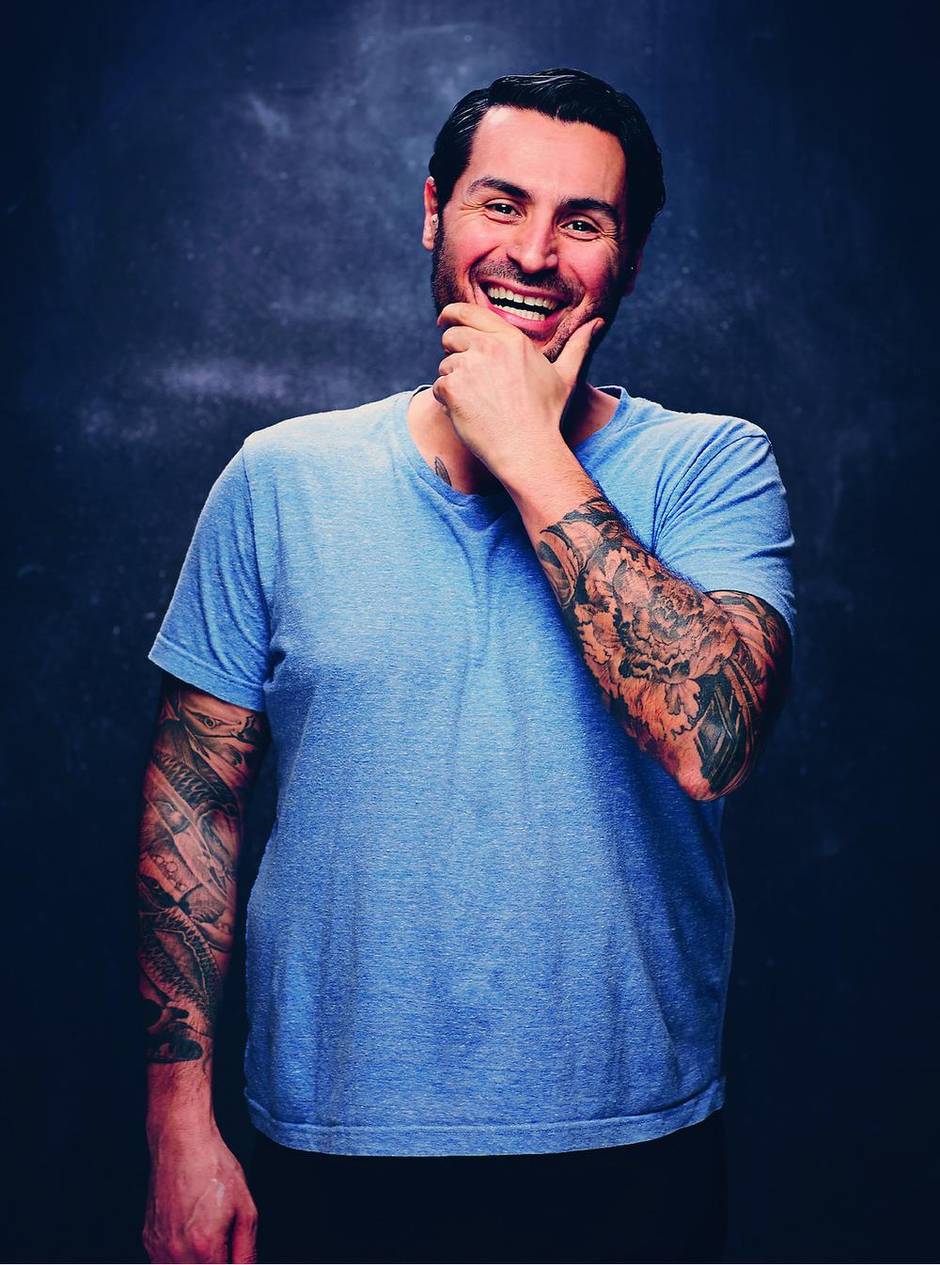 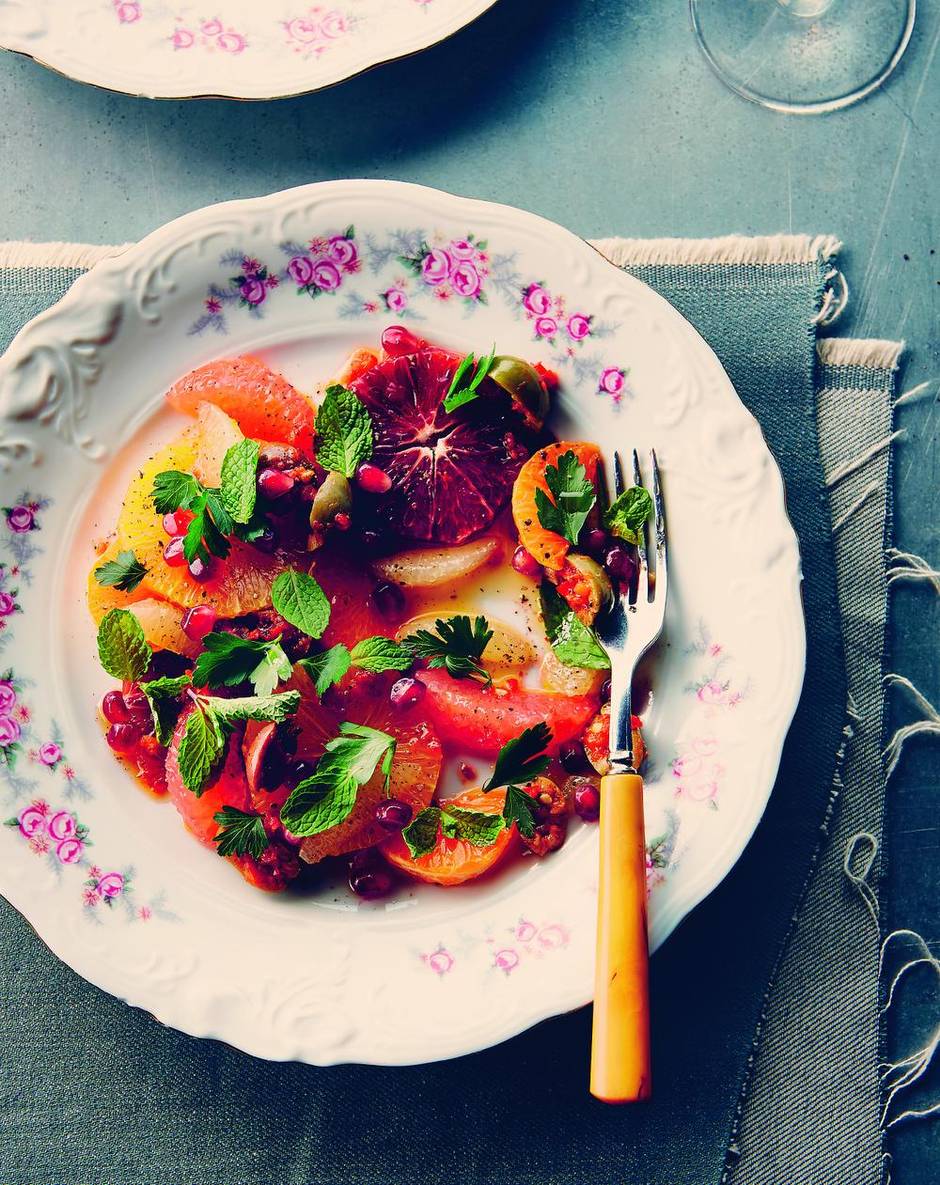 On the versatility of octopus on Toronto menus:

“The octopus was on our menu since day one and it’s still on our menu. It’s become a staple item that’s a good representation of the food we do at our restaurants. The citrus salad is a very seasonal item that’s on our opening menu. I guess both were items that I grew up eating. My grandmother didn’t always make octopus, but she made it for us on Fridays sometimes, fish day. The citrus salad was something we ate at Christmas, and it was a natural pairing for fish. They just went really well together.

There’s a big octopus resurgence as of late. I don’t know why people can take a bunch of stabs in the dark but it takes one person to put it on the menu and it jogs the memory in others that octopus is an amazing ingredient. It’s meaty, it’s versatile and takes on a lot of applications; you can do a lot with it if you know how to cook with it. I guess in the last year and the year before, if you didn’t have octopus on your menu, it seems like it was half-done.” 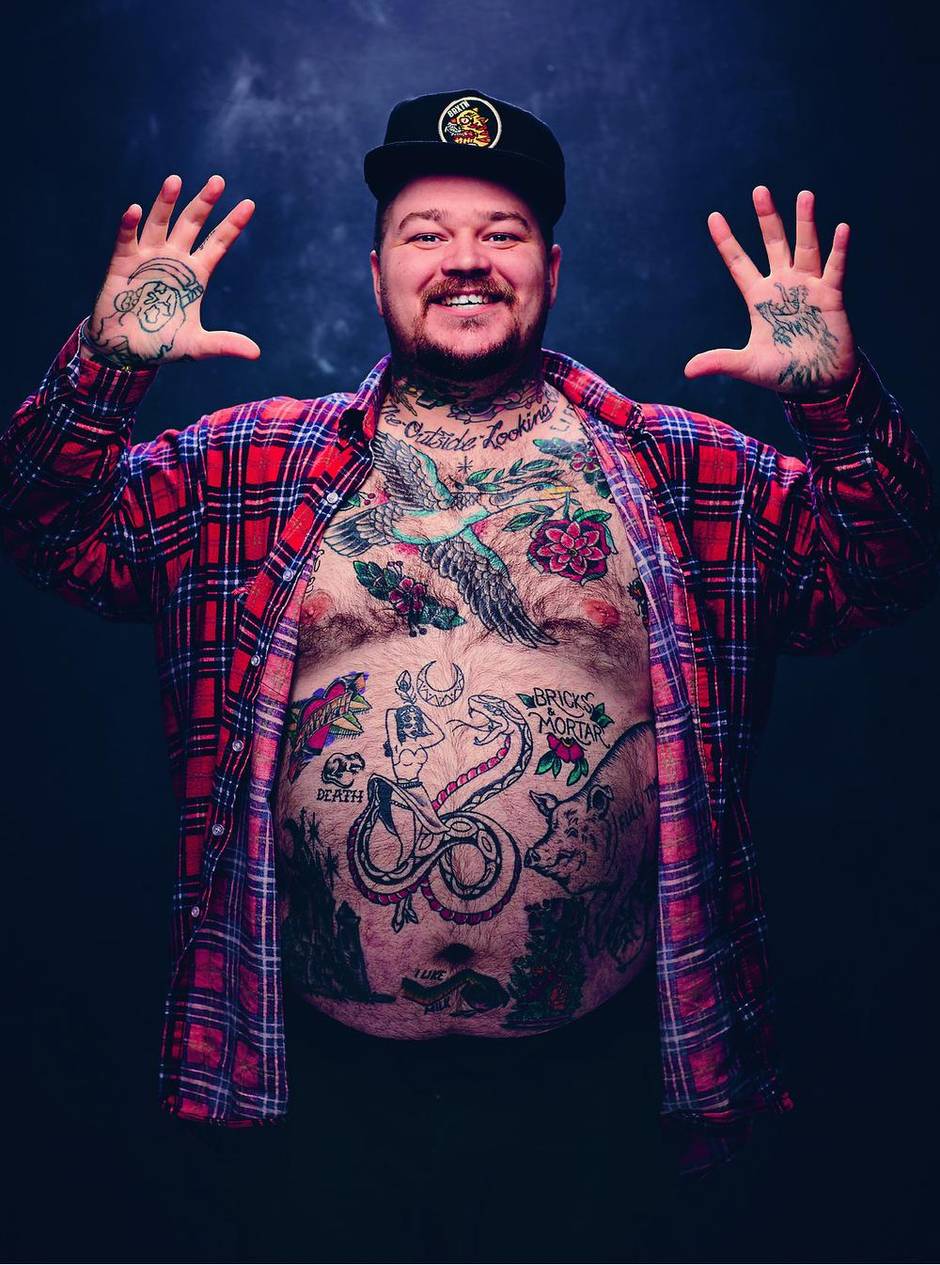 The Parts and Labour Burger 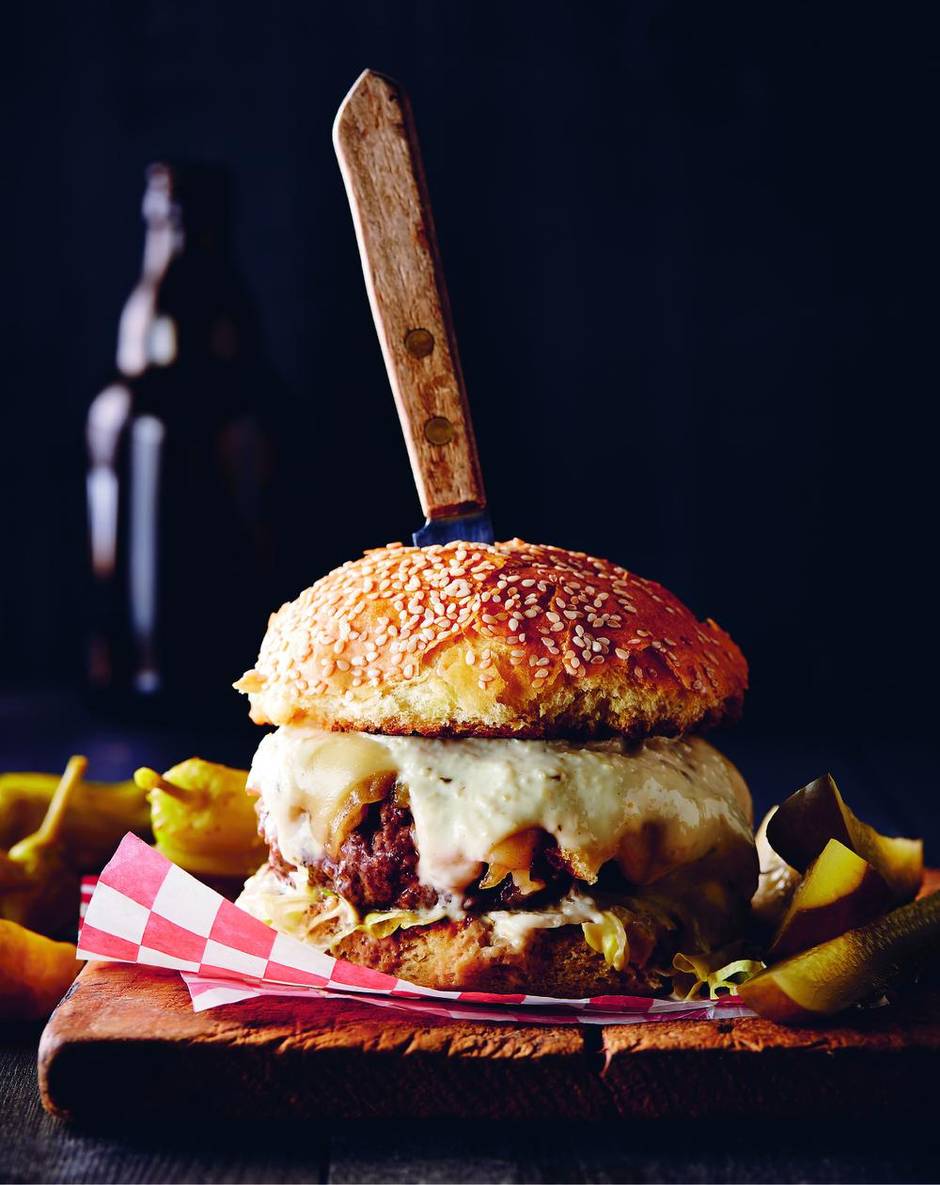 On the seemingly endless burger trend:

“I feel we’re on the end of the burger trend. I think us doing it was even bold when we opened Parts & Labour Burger a year ago and we couldn’t have done it if it wasn’t for the [burger competition] show Burger Wars. We opened it because we had hundreds of people coming to the [Parts & Labour] restaurant for burgers. It’s a direct correlation to us winning on that TV show.

“Still, it’s a timeless thing, and burgers will always be hot. It’s a North American thing that will never go out of date. One person might be sick of burgers, but there will be 10 more that want a burger … It’s not a strictly Toronto thing, the West Coast has In-N-Out and Danny Meyer’s Shake Shack just celebrated 10 years. Burger’s Priest was the first here and combined Shake Shack and In-N-Out and made the Burger’s Priest burger, and I think that’s when Toronto went burger-crazy. Toronto goes hard when it goes crazy for something.” 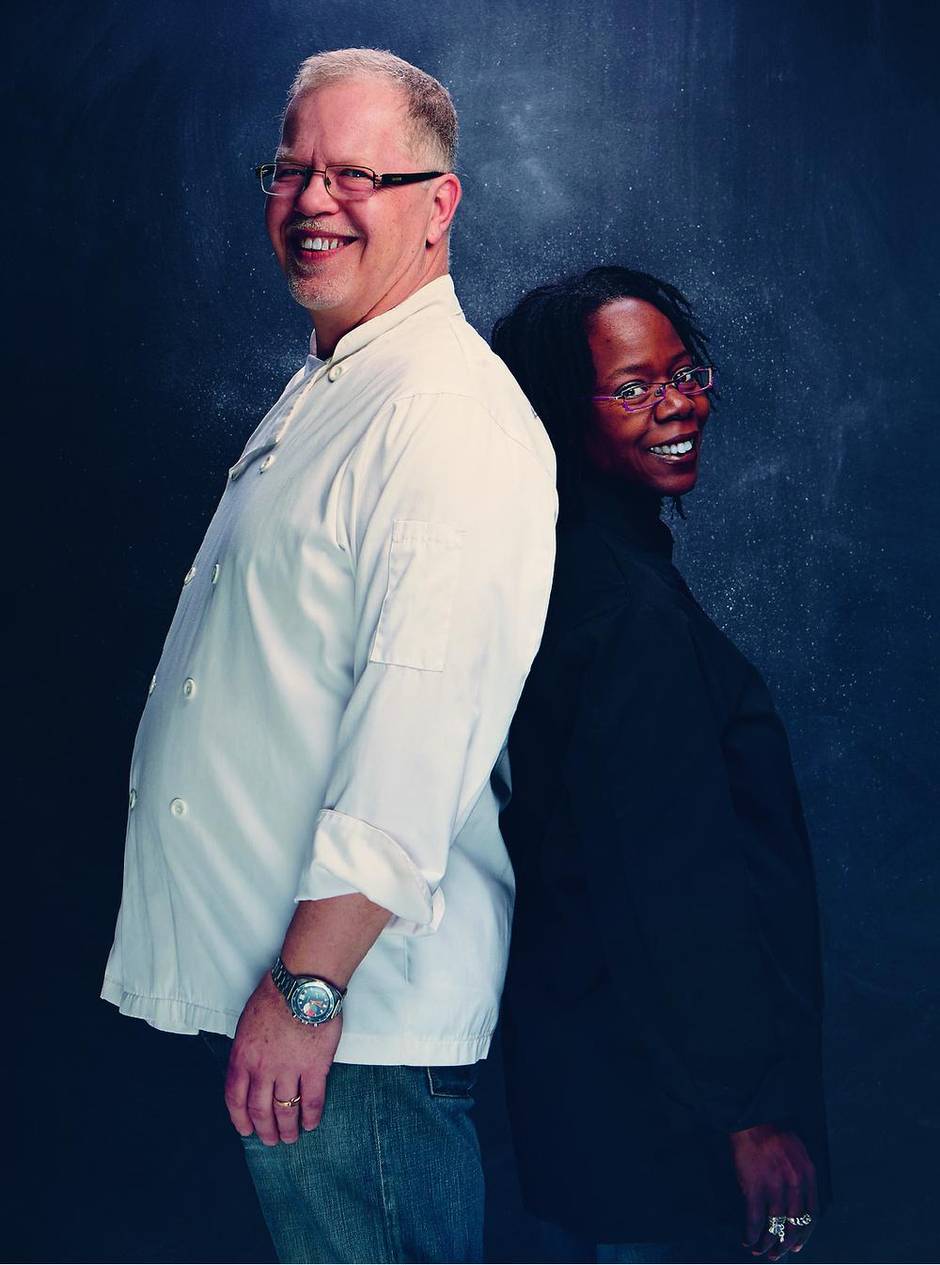 Fish cakes with remoulade and cucumber and red radish salad 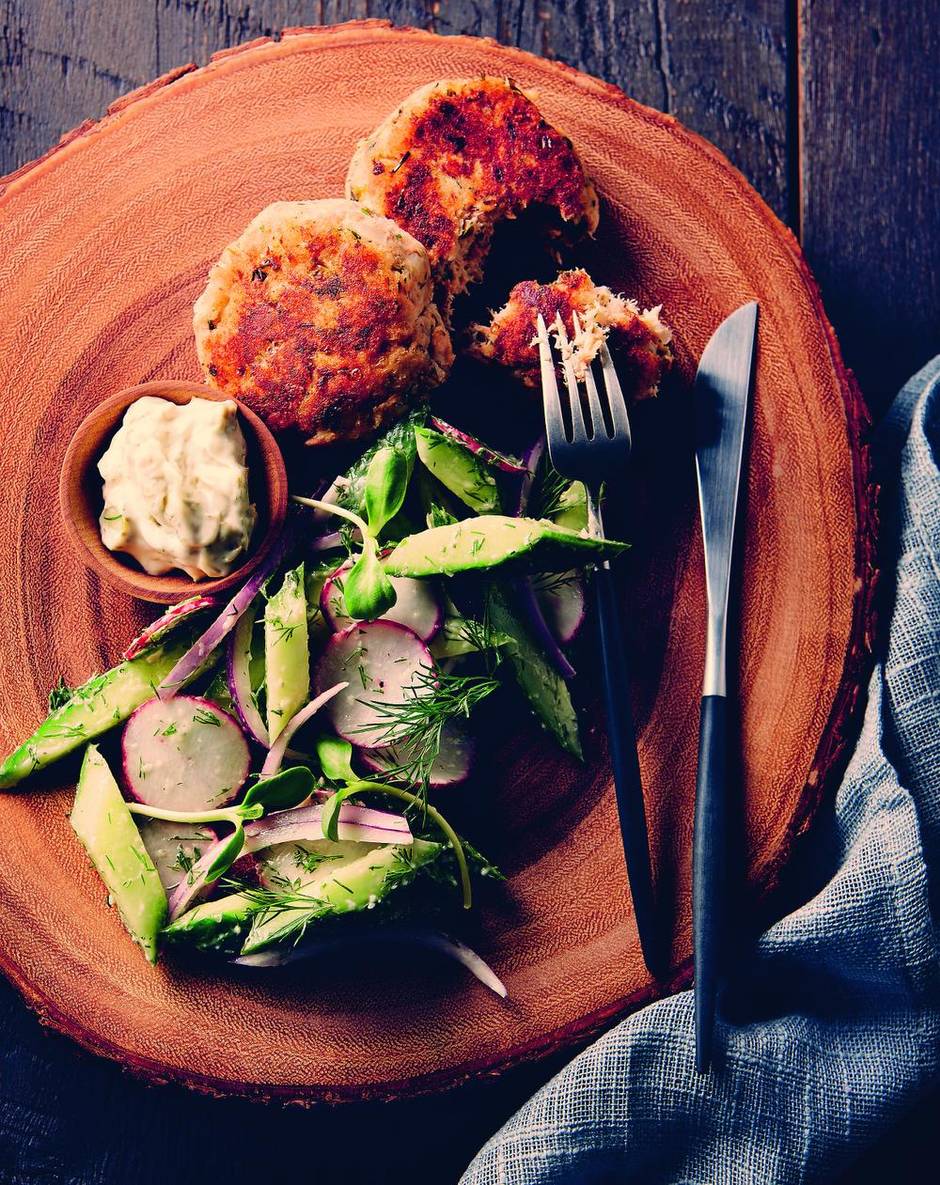 On similarities between Scandanavia and Canada:

“With places like Noma getting all the prestige, we take a page out of their book, which is about terroir and that’s the crux of what Scandinavian cuisine is. Diners are really savvy now and want to know where their food comes from. We do work with local suppliers and go organic when possible but, by now, it shouldn’t be something you have to say, it should be something that you should just do … I think often times people are surprised at how not different [Scandinavian dishes] are compared to ingredients you can find in Canada, since we’re at similar latitudes. We’re a smokehouse first and foremost, and that’s threaded throughout the menu along with braising, curing, pickling, jarring. Every Canadian is familiar with the idea of preserving, pickling and fermenting.”