Onto the brightly lit basketball court the 22 members of the Raptors Dance Pak shimmy into formation, shaking their miniskirts for 20,000 screaming fans crammed inside Toronto’s Air Canada Centre.

It’s early November, just three weeks into the season, and the home team is trying to bounce back from a two-game losing streak. After three quarters, the New York Knicks are proving an even match for the Raptors and the dancers are moving fast to hype up the crowd.

An NBA basketball game is the funhouse of the modern sporting world: For every stoppage in play, there’s a prize giveaway or a call for the crowd to get LOUD. The DJ fills nearly every silence with booming rock and hip hop. The Dance Pak is the pulsating human embodiment of that choreographed chaos. 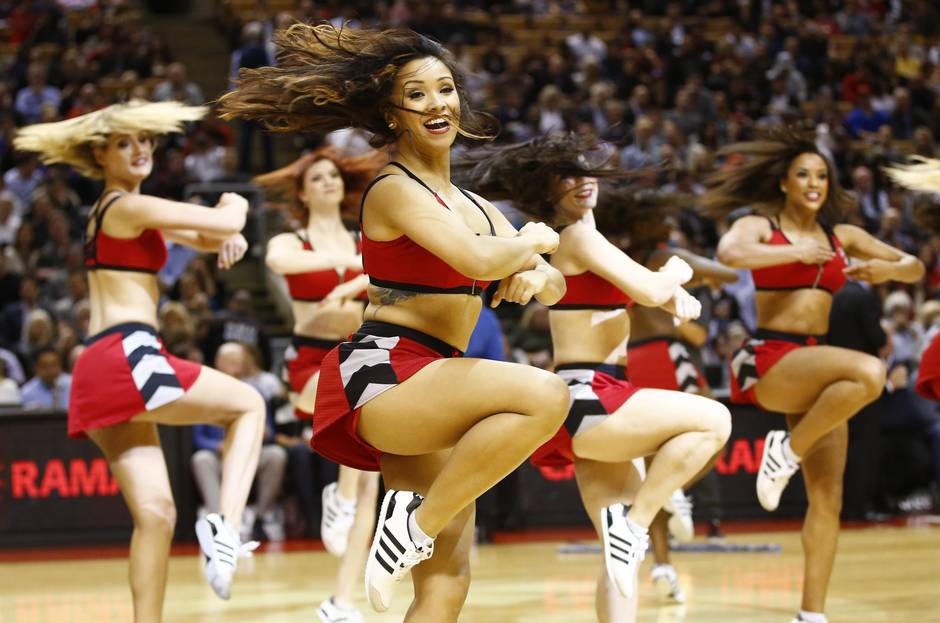 The dancers’ two-minute bursts of dancing are the equivalent of an 800-metre run, done with a smile that belies the fitness, talent and dedication required to earn a coveted spot on the squad. (Photos by Mark Blinch for The Globe and Mail)

The dancers’ two-minute bursts of dancing are the equivalent of an 800-metre run, done with a smile that belies the fitness, talent and dedication required to earn a coveted spot on the squad. “We are a key element of the in-game entertainment and so all our performances need to be full of energy,” choreographer Amberley Waddell explains.

A Waterloo, Ont., native, Ms. Waddell started with the Dance Pak at 19. She learned first-hand that for dance to succeed on a 94-by-50-foot basketball court, it needs to be big, bold and bootilicious. No pom-poms, though, just bump-and-grind hip hop and big-kicks jazz dance.

New York choreographer Texie Waterman is credited with having created sports-stadium dance when he was recruited to generate explosive on-field routines for the Dallas Cowboys cheerleaders in the 1970s. Ms. Waddell has taken that style and modernized it: The introduction of lunges and squats and the heightened emphasis on muscularity are moves she learned while performing with Beyoncé and Gladys Knight in Los Angeles, and Bette Midler in Las Vegas. Her 40 routines also focus on the little details, such as hand claps over the head, finger snaps and flicks of the wrist and hair. 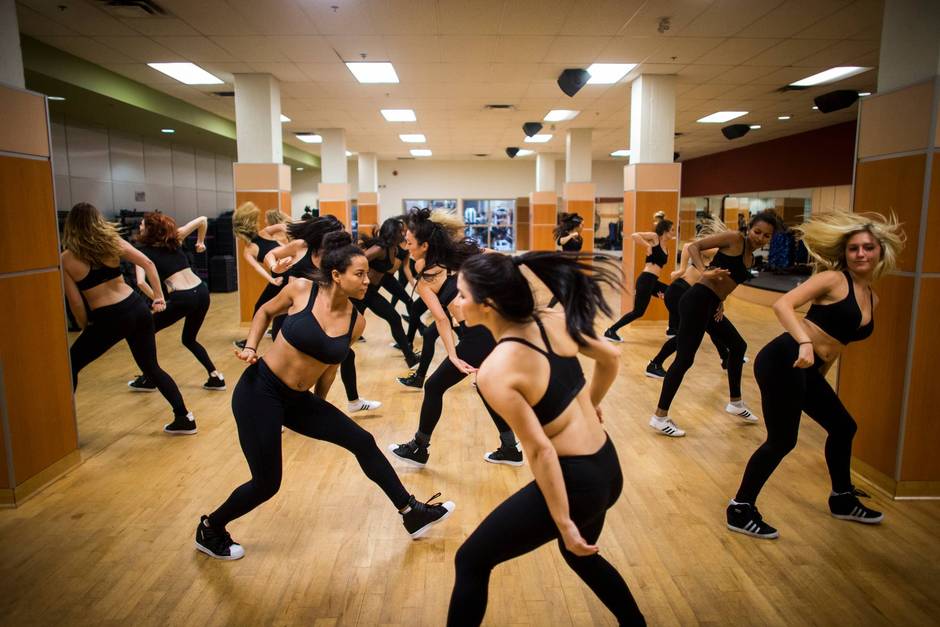 Since auditions in July, the dancers have been meeting three times a week to prepare for 41 game performances.

Each routine is drilled into the pack in a downtown Toronto gym lined with mirrors that grow steamy during the three-hour practices. The dancers have been meeting there thrice weekly since passing the audition in July. Throughout the season (which runs from late October to mid-April – and that doesn’t include a playoff run), they will clock between 45 and 50 three-hour rehearsals to prepare for at least 41 game performances plus community appearances – this year, there is even a game in London. The sessions start with a 30-minute warm-up that includes planks, push-ups and ab-crunching sit-ups by the hundreds. The rest is given over to cardio training and figuring out how to dance in the round, a challenge to dancers used to facing front and trained to watch themselves in a mirror.

The talent needed to be a part of the Dance Pak isn’t lost on Kenny Pearl, a former dancer with the famed Alvin Ailey and Martha Graham dance companies who was artistic director of Toronto Dance Theatre in the 1980s. Now a senior dance faculty member at Ryerson University, Mr. Pearl has had several Dance Pak members in his classes. “Their bodies can take a beating with the short, high-voltage bursts of energy required of them,” he observes. That they can recover so quickly is another reason Mr. Pearl admires their work.

“I see the Dance Pak as a group of smart, talented, beautiful and powerful women,” says Tamara, a 23-year-old rookie, of why she desperately wanted to join. (Dance Pak members do not disclose their surnames so as to keep overzealous fans at bay.) She is a former competitive dancer who runs her own photography studio. “It is very empowering.” 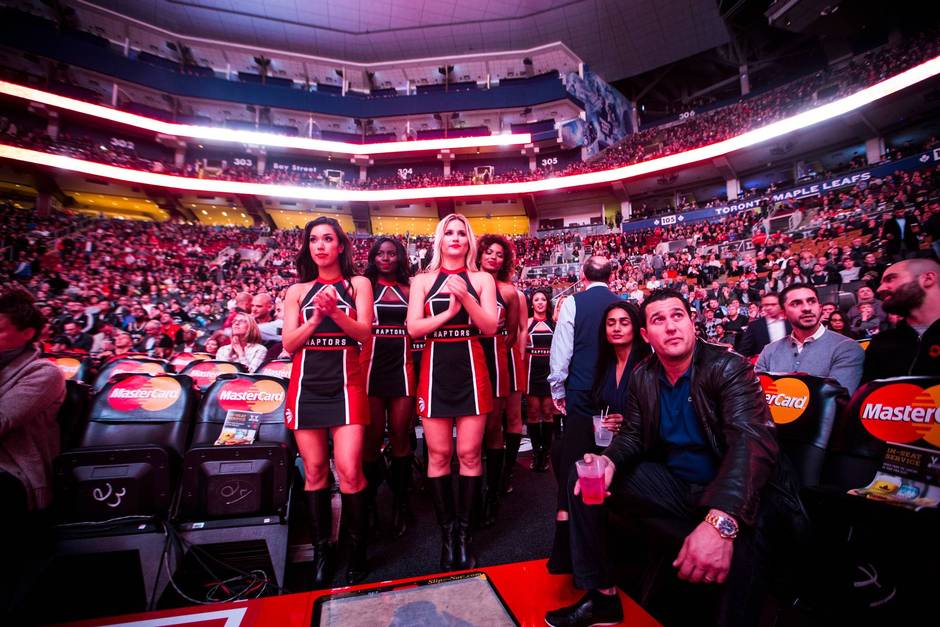 Even off the court the dancers are tossing giveaways or clapping from the sidelines.

It is also highly remunerative, an attractive prospect for dancers who often make much less in their industry. The Dance Pak are employees of Maple Leaf Sports & Entertainment, the company that manages the Raptors and the Toronto Maple Leafs, and are prohibited from disclosing their salaries. But “it’s one of the best and most rewarding dance contracts in the city,” says Kalina, an office worker by day who teaches at a dance studio on nights when not performing.

This season, there were 250 applicants and fewer than two dozen made the final cut. Even dancers from last season must reaudition.

“There’s so much talent present,” says Monique, a first-year member who trained as a ballerina. “You have this one opportunity to put it all on the floor for the judges to see or else that’s it, you’re cut.”

For this 24-year-old, the payoff is maintaining a strong connection to dance while engaged in other pursuits such as, say, pre-med studies at the University of Toronto, where Monique is doing a master’s degree in neuroscience.

Game days – usually a 7:30 p.m. start time – mean a 3:30 on-court rehearsal to work out line formations, which are especially important for crowds watching performances from the upper tiers of the ACC. Next, the dancers proceed to the dressing room to do hair and makeup. Then, it’s showtime. 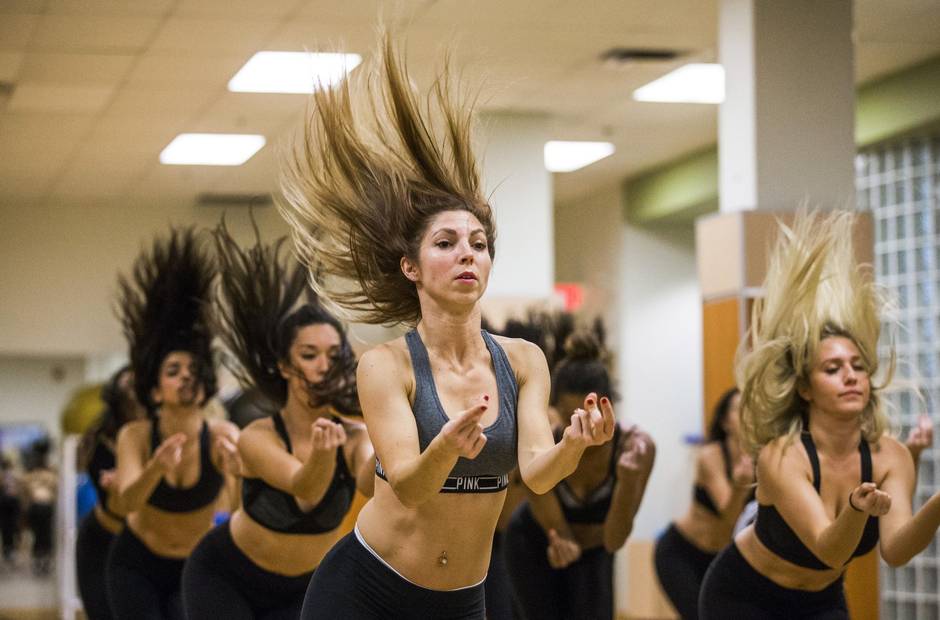 There are 22 members in the group, who all auditioned from a field of 250 applicants. Even returning dancers must reaudition each season.

The dancers are on even when they are off the court: running into the stands, tossing giveaways, clapping from the sidelines when the ball is in play. Which is what they are doing right now. The Knicks are leading the Raptors by only a few points as the game enters its final minutes. Tensions in the arena run high. The dancers watch nervously on the edges.

They have divided themselves into two squads of 11 dancers in adjacent corridors leading to team dressing rooms. They clap rhythmically, and enthusiastically, urging the crowd to stand and clap along.

If the Raptors can overcome the deficit, the dancers will rush back onto the court to do a victory dance. But in the final seconds, the Knicks hit a succession of free throws and hang on to defeat the Raptors 111-109.

The crowd shuffles home disappointed. The team will regroup. The Dance Pak will strut their stuff at other games.