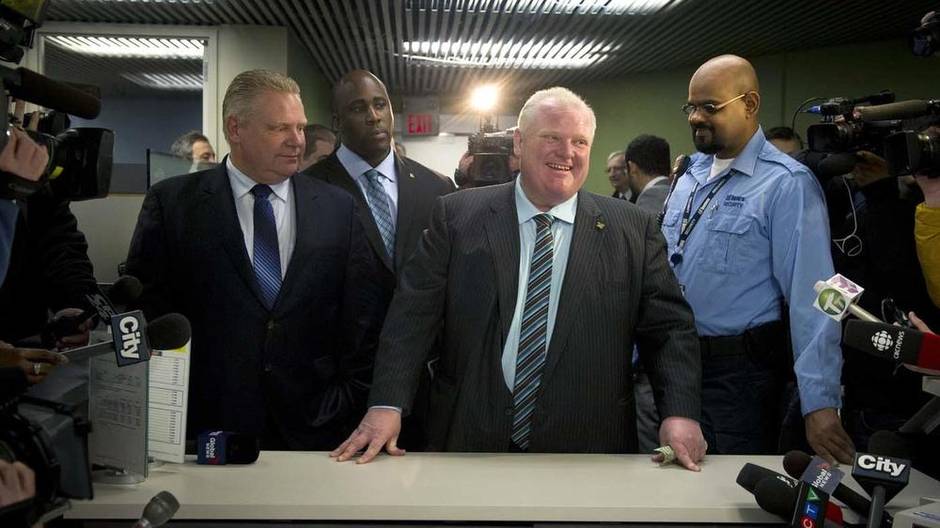 Making good on a pledge to register for re-election as soon as possible, Mr. Ford tells reporters: “I’ve been the best mayor that this city’s ever had.” When asked how he will respond to parents he meets on the campaign trail who bring up his drinking and drug use, Mr. Ford is dismissive: “You want to get personal? I’m sticking to my record. That’s all personal.” But one erstwhile ally and prospective rival, councillor Denzil Minnan-Wong, is not so sure. “Character, integrity and trust are integral aspects to running for public office.”

After months (years?) of speculation, John Tory files his papers to begin his run for mayor officially. Telling reporters he wants to make Toronto “liveable, affordable, and functional,” he pledges to build what he calls the “Yonge Street subway relief line.” (Note the lack of the word “downtown” there.) Indeed, he calls it his top transit priority. 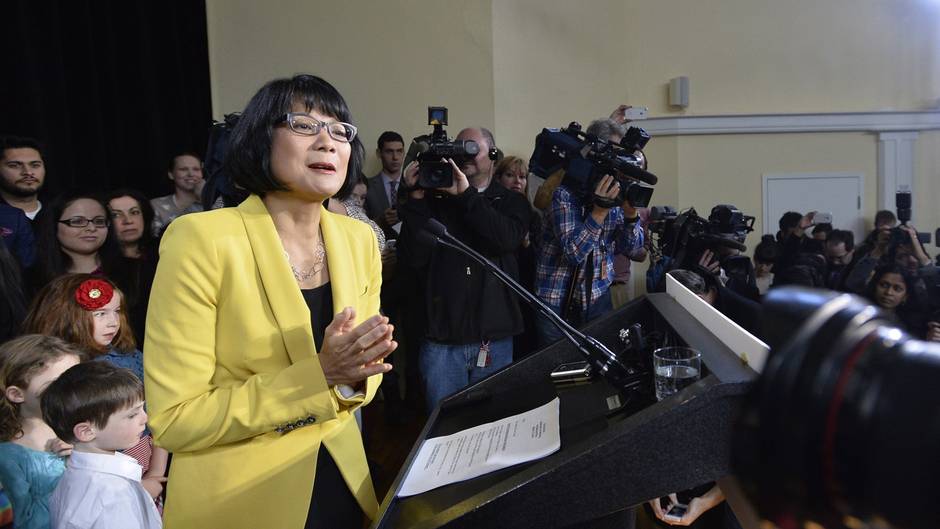 Hours after resigning her seat in the House of Commons, Ms. Chow appears at a church in St. James Town, the low-income neighbourhood where she grew up after her family emigrated from Hong Kong, to announce her candidacy. Saying Rob Ford “is no role model for my granddaughters,” she adds: “It’s not just the scandals. It’s really the failed policy of the past.”

Benefiting in part from a growing crowd of high-profile candidates to the right of her on the political spectrum, Ms. Chow becomes the immediate front-runner, earning the support of 36 per cent of respondents to Rob Ford’s 28 per cent and John Tory’s 22 per cent. “We are not the favourites,” Mr. Tory tells supporters at his kick-off rally, conjuring an us-against-the-world posture that each of the main candidates will pick up over the ensuing six months.

Showing a willingness to alienate large blocs of voters, Olivia Chow unveils details of her transit plan, saying she would be willing to raise property taxes to help pay for better transit, but that would not include a Scarborough subway extension. “If it means a property-tax increase, we will do it, but we need the other two levels of government to join us,” she declares.

Hours after The Globe and Mail reports on the existence of a new video showing Rob Ford inhaling what appears to be crack cocaine, and the Toronto Sun posts audio of him making lewd comments about mayoral contender Karen Stintz, the mayor takes an official leave from city hall. After days of Where’s Waldo-type sightings in Toronto and elsewhere, Mr. Ford confirms he is in rehab in cottage country, north of the city. 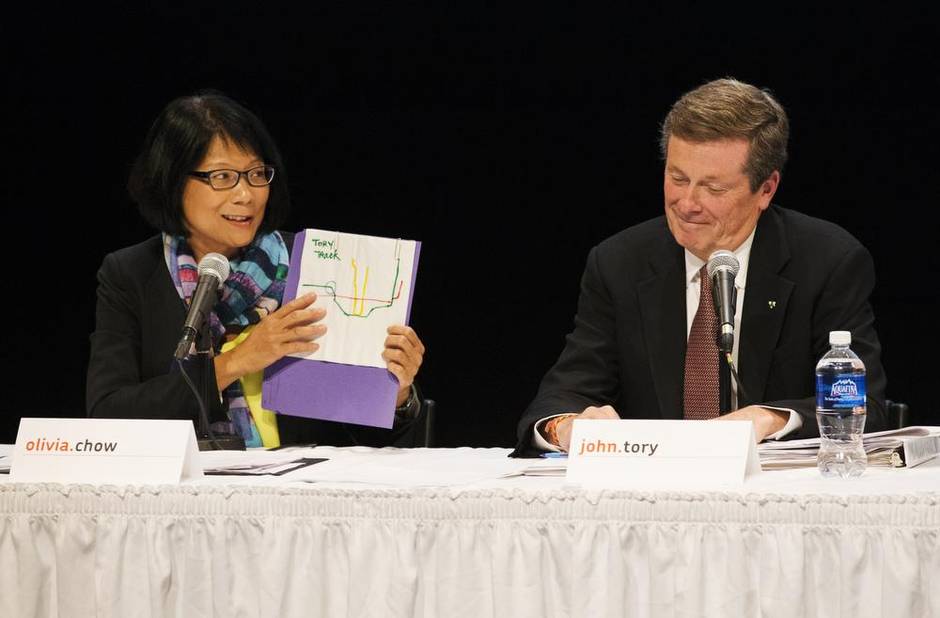 During a lunchtime appearance at the Canadian Club, John Tory unveils a grand plan to create 53 kilometres of high-frequency “surface express rail,” piggybacking on the provincial Liberals’ pledge to electrify GO train routes. Almost immediately, critics jump on his plan to use tax-increment financing for the city’s $2.7-billion share of the $8-billion cost, as they note the funding mechanism has failed to live up to its promise in many other North American municipalities.

Sporting a bright purple helmet on her head and sunflowers on her handlebars, Olivia Chow cycles to Cabbagetown, where she announces a plan to build a comprehensive network of bike lanes. “Having a cyclist on the street means less crowding in the subway, less crowding on the road,” she declares. John Tory dismisses the plan, saying dedicated bike lands could inconvenience car drivers. 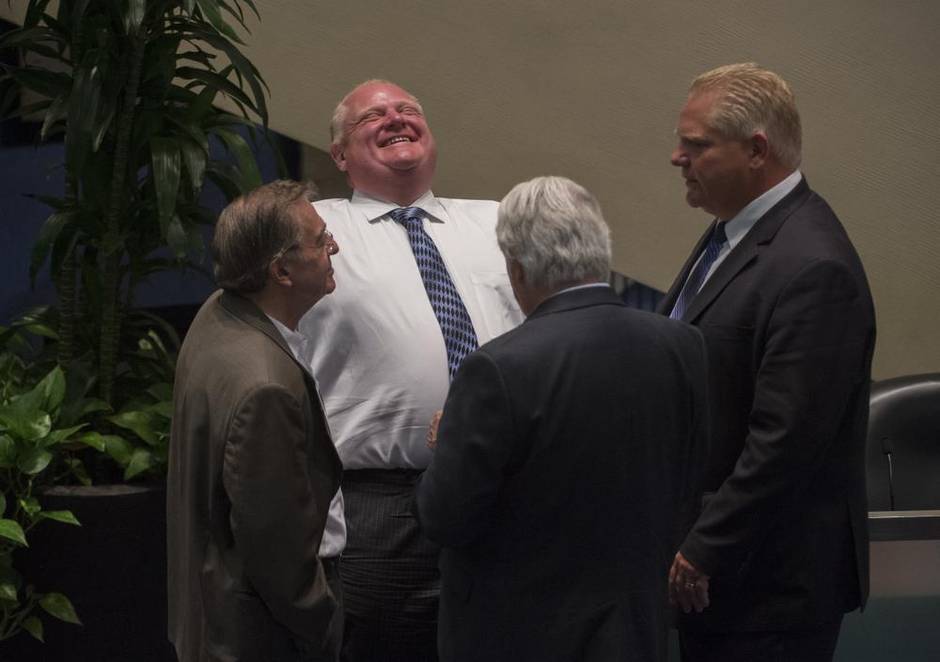 Sixty days after taking a leave, Mayor Ford returns to the spotlight with an invitation-only press conference, saying he is “ashamed, embarrassed, and humiliated” at his behaviour. “I was wrong and I have no one, but no one, to blame but myself.” After about 10 minutes of self-flagellation, Mr. Ford switches into campaign mode, trumpeting his administration’s successes. Then he leaves without taking questions.

Facing off for the first time since Rob Ford returned from rehab, the five main contenders – including Olivia Chow, John Tory, David Soknacki and Karen Stintz – go toe-to-toe in a raucous debate in Scarborough. While the others mainly stay away from Mr. Ford’s misadventures, Mr. Tory quips, “We know what you were doing, and it wasn’t managing the taxpayers’ money,” and Ms. Chow says: “Mr. Ford, even when you’re clean and sober, you can’t stick to the truth.”

A flood of Liberal support for John Tory begins as Ontario cabinet minister Brad Duguid endorses the one-time leader of the Ontario Progressive Conservative Party. The same day, a Nanos Research poll shows him with a 14-point advantage – 42 per cent – to Rob Ford’s 28 and Ms. Chow’s 26 per cent. Although the level of his support wavers on occasion through subsequent polls, he remains in first place. 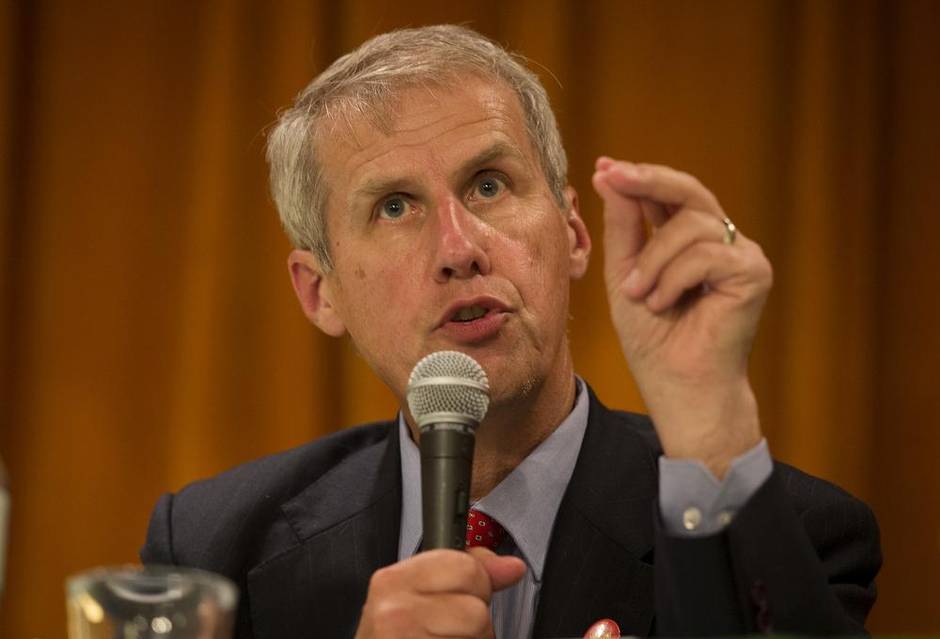 David Soknacki pulls out of the race

Three weeks after Karen Stintz dropped out, saying she is done for good with politics, her fellow also-ran David Soknacki issues a brief statement indicating he, too, is out. “While we fought this as a campaign of ideas, we’ve also heard from voters who’ve told us that removing Mayor Ford is their top priority.” With less than 5 per cent of support in opinion polls, Mr. Soknacki admits he will not be the giant slayer.

After experiencing “unbearable” pain in his “left, lower quadrant” during breakfast, Rob Ford quietly checks himself into Humber River Hospital, where a CT scan reveals an abdominal tumour. At a sombre press conference that night, his brother Doug turns aside questions of what this might mean for the campaign, saying only that the mayor is “in good spirits.” His rivals wish him a speedy recovery.

In an extraordinary last-minute manoeuvre, Rob Ford withdraws his candidacy for re-election and files papers to run instead for his old council seat in Ward 2. His brother Doug, who had said he was finished with city politics, picks up the ball and registers to run in his place. “Today, I stand here with mixed emotions and a very heavy heart,” Doug says. 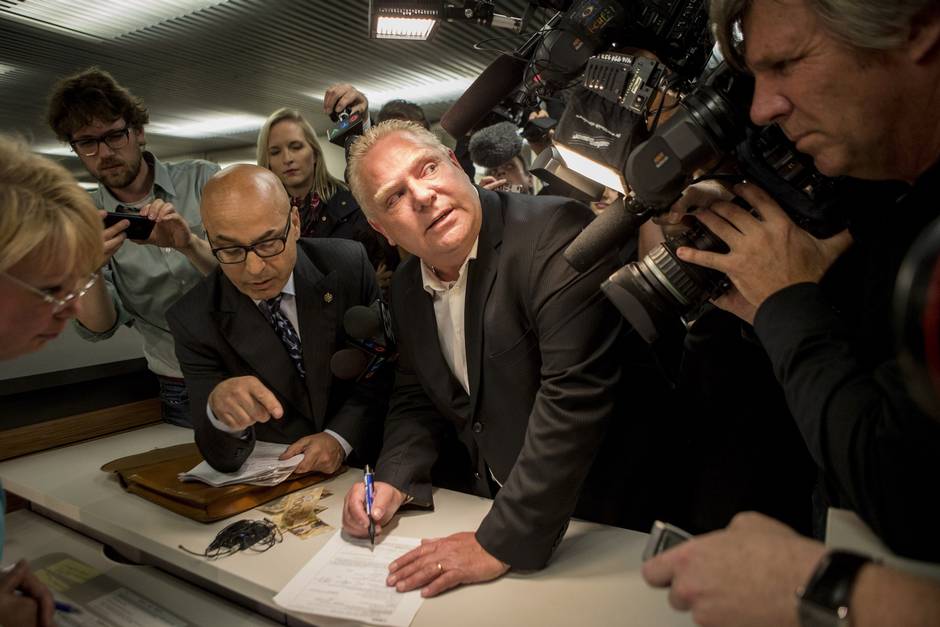 Doug Ford comes out swinging (but not for Pride yet)

Showing the anti-establishment fire he displayed as a councillor, Doug Ford takes part in his first debate. “I’m the only candidate that has the backbone to stand up to the special-interest groups that are working on their campaigns,” he declares. But when John Tory buttonholes him on his lack of support for the Pride parade, he stays mum. Two weeks later, in a big shift from his brother’s position, Mr. Ford announces he would march in the parade.

Racism on the campaign trail

During a Corso Italia debate, a man brings up Olivia Chow’s background as an immigrant, and then derides her long career as in politics (“You’ve been a city councillor – public purse; Member of Parliament – public purse…”). She smacks him down, “I don’t know what it has anything to do with me being an immigrant,” she says to wild applause. “I’m a Canadian. I’m a proud Torontonian.” Weeks later, her fiery response becomes the centrepiece of a TV ad.

Vowing to fight Toronto’s “gender pay gap,” Olivia Chow earns the backing of dozens of prominent women, including Judy Rebick, Naomi Klein and Michele Landsberg. They say: “Olivia Chow’s entire platform is based on a profound understanding of issues of concern to women – and that ‘women’s issues’ such as accessible, affordable child care are equality issues, economic issues, and should be election issues.” 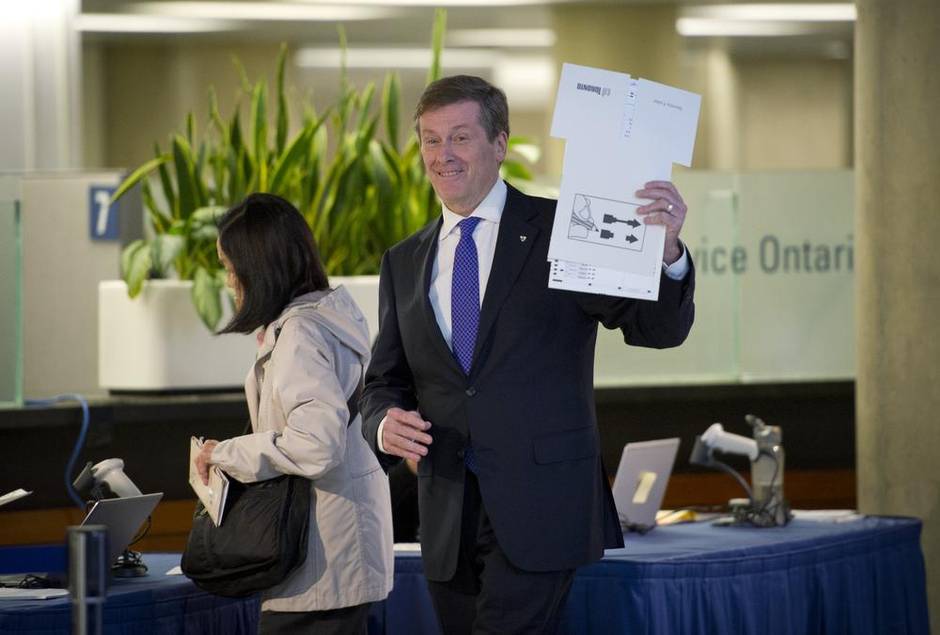 Advance Polls Open to a Flood of Voters

After enduring a protracted campaign, voters rush to advance polls in record numbers to support their chosen candidates: 161,147 cast ballots over six days, a sharp increase from the 77,391 who voted in advance in 2010. Rob Ford, who has frequently urged people to vote regardless of their choice, seems eager to ensure they do: He shows up to – and is kicked out of – no fewer than three advance polls because campaigning on site is illegal.