The boxes all burned in the Wellesley Street fire, but they remain stacked in the rooms of Stephen Vassilev's mind.

A relentless buzz surrounds them, the result of tinnitus, an auditory ailment he has suffered since a hard fall down a flight of stairs at age 3.

Mr. Vassilev, 59, can talk his mouth dry making sense of the boxes' contents: legal papers from the real-estate battle that forced him into social housing; conceptual designs to prevent the collapse of tall buildings during fires; his archive on the late Wilfred Bigelow, the pioneering Toronto heart surgeon whose papers he rescued from a Rosedale curb on Aug. 29, 2003.

What he can't reconcile is how his efforts to bring about justice and help others would ultimately fuel the fire that broke out in his 24th-storey apartment on Sept. 24. It forced the 1,200 residents of 200 Wellesley St. E. to the street, more than half of whom remain in temporary shelter elsewhere.

"It was a library that I hoped would improve people's lives," says Mr. Vassilev, whose new temporary home, in a seniors' building on Dufferin Street, is sparse for the time being. "It was very full," he says of his old place, "but the point is, I had fiduciary duties to keep."

If only the influential people of Elliot Lake, Ont., had played fairly, the former real-estate broker wouldn't have lost his money and amassed 18 years' worth of legal papers, along with the '90s-era Mac computers he used to store data and write music.

If only Canada's historical institutions had cared more, they would have housed his Bigelow collection.

If only terrorists hadn't flown planes into the World Trade Center, he wouldn't have had to devise his anti-collapse system and draft his 9/11 memorial designs.

"You do all this work, and then yourself become a victim," says Mr. Vassilev, who believes someone with an interest in destroying his papers set the fire while he was out.

If the people whose unjust actions forced him to keep all this material could be held accountable, he adds, then the Wellesley victims could be compensated.

For now, Toronto Community Housing officials have been busy enough trying to minimize disruptions to the lives of displaced residents. Of the building's 712 units, 306 have been reoccupied. Tenants from 230 units remain in hotels, long-term care or social housing units in other locations, while the rest are staying with friends or family. A handful of tenants who had been sleeping at the nearby Wellesley Community Centre have accepted offers of more suitable shelter.

The housing authority has also been addressing a problem that the fire illuminated: hoarding. Inspections revealed that 19 of the 712 units were overcrowded with belongings, creating potential fire and health hazards.

"We are now in the process of reducing the number of items in those units so that they are safe, from a fire perspective for the tenants, to return to the units," says Mitzie Hunter, the housing authority's chief administrator.

Beyond that, the agency will continue to inspect units annually and offer tenants support, including counselling, to deal with hoarding issues. Still, "it is up to the tenant to accept that support," Ms. Hunter says. "It is challenging for us."

More-frequent inspections could be done where problems are found, but "there is the Residential Tenancy Act, which gives the tenant the right to refuse access to their units, and [to refuse]additional supports," she says. "They are responsible for addressing any problems that arise in their units and ensuring that safety standards and health standards are complied with."

Mr. Vassilev, who moved into his one-bedroom unit last year from a larger one nearby, says he complied when building managers asked him not to bring all his boxes along. He used a moving allowance to truck some materials to an acquaintance's building in Northern Ontario. And, when officials visited this summer and raised concerns about his stacks of newspapers, he removed them.

Still, much remained: four large bookshelves, his computers and printers and scanners, and more boxes, including one he kept on top of his television, which had a habit of turning itself on occasionally.

Now, he can hardly believe it's all gone, along with his tabby cat, Fonzy. He died in the fire.

"It's like living in a hotel and not having access to your own apartment, your own possessions," Mr. Vassilev says, his new home devoid of personal items except one: a 1990s flatbed scanner, bought on eBay.

He can't use it just yet, so it sits in a box, but it will surely come in handy some day. 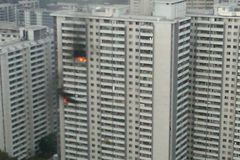 Some tenants return home a week after high-rise fire
October 2, 2010

Over a thousand forced out of their homes after six-alarm fire in Toronto
September 24, 2010