On his forthcoming album, Ron Sexsmith sings about Trinity Bellwoods Park, his long-time neighbourhood. Man at the Gate (1913) is a poignant ballad inspired by Toronto lore and a century-old postcard. Mr. Sexsmith, a city fixture and a three-time Juno award winner, wrote it before moving to Stratford, Ont.

"When I wrote the song, I hadn't realized I was writing a farewell," Mr. Sexsmith says. "But I guess I was."

While Toronto frets overs its vanishing music venues, there's another, quieter exodus afoot: fleeing songwriters. Landmark musicians are leaving for more affordable regions in unsettling numbers and, with them go songs and culture. It's a tune we've heard before, but this time we might not like how it ends.

The core matter is sky-high real estate prices and commercial development that result in rocketing rental rates, not only for club owners, but for musicians.

"The unaffordable rent increases in Toronto are something that won't be reversed," says Murray Foster, a musician and Toronto Music Advisory Council member, who foresees a hollowing out of the downtown core. "We put up with a lot of hassles that come with living in a big city, and what we get in return is a vibrant arts culture. If we drive that out, what are we left with? A city full of terrible traffic?"

"Toronto has become so expensive, my wife and I couldn't afford to buy a house here," says Mr. Sexmith, 53, who has always rented. "So we looked elsewhere, and settled on Stratford. It seems like a more forgiving place to grow old in."

Music venues can be cultural hubs and community-builders; troubadours fulfill the same function. In the folk-music tradition, they foster camaraderie. A line from Gord Downie and the Tragically Hip about "that night in Toronto" or local references from the "running through the 6 with my woes" by rapper Drake rouse a hometown audience as little else can.

Local songsters observe and document, putting cityscapes to melodies, and lyrics to maps. Mr. Dekker, of Great Lake Swimmers, hauntingly sings about the subway on I Will Never See the Sun; Mr. Sexmith croons about being out of place on Dragonfly on Bay Street; Mr. Raymond's Morning Glories is a love letter to Kensington Market; and when Mr. Rutledge sings on The Heart of a River, "We don't want to live in the city no more," we sadly know which city the song concerns.

"When I was an emerging songwriter, I lived in a shared apartment for $355 a month off of Roncesvalles, and I believe the most expensive place I lived in was $510 a month on College at Augusta," Mr. Rutledge says. "I believe anyone would be hard-pressed to find rents like this any more. I don't see how the average citizen can afford to live in a city like Toronto, let alone the emerging songwriter or musician."

Toronto has a rich tradition of songs about itself, written by Bruce Cockburn, Kardinal Offishall, Murray McLauchlan, Melissa McClelland, k-os, Blue Rodeo, Elizabeth Sheppard, the Shuffle Demons, and many others. Some songwriters, such as Drake and Gordon Lightfoot, can afford a Bridle Path mansion. Most, however, live in "dirty mansions."

A dirty mansion, Mr. Raymond says, is a big house originally built for one family that has been divided up into multiple apartments. "I've lived in dirty mansions most of the time I've lived in Toronto," he says. "It's how most musicians live here, and I finally decided I wanted a whole dirty mansion to myself. I'm able to do that in Hamilton."

At the most recent meeting of the Toronto Music Advisory Council (a volunteer body formed in 2014 to advise City Council on issues related to Toronto's music industry), the matter of protecting music venues was raised. The issue is in crisis mode with the run of closures that include the Silver Dollar Room, Not My Dog, Harlem, Holy Oak, the Hoxton, and the venerable folk-music hangout, Hugh's Room (which is set to re-open in April).

The possibilities of amending noise bylaws and adjusting zoning regulations were discussed. Quick fixes for the vanishing songwriters, however, aren't as apparent.

Artists of all kinds gravitate to cheap space. For the first time in his life as a professional musician, the Juno-nominated Mr. Raymond, in his Hamilton house, has a dedicated room for writing songs. That eventually artists are pushed out of that space is nothing new – Toronto's just running out of real estate.

"This is the way things go," says Molly Johnson, a jazz singer and venerable presence who saw the effects of gentrification on musicians back in the heady Queen Street West days of the 1980s.

"Hamilton is our Brooklyn now," continues Ms. Johnson, who organized the wildly successful Kensington Market Jazz Festival last September. "What makes a city vibrant is the culture, and if you suck that culture out, and if the artists all move to Hamilton, then we're stuck with Bay Street."

At the Cameron House, where he still plays every Thursday, Mr. Raymond speaks about songs of place. A good one, he says, carries its location with it. "You can sing a Toronto song to people anywhere, and they get to absorb the city in a way most tourists don't have a chance to. It's like they get to fly rainbow airlines and come here for four minutes."

Many music fans do fly here. But with venues closing and songwriters leaving, what will they find when they arrive? 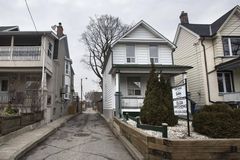 I won the Toronto real estate lottery, but I'm not celebrating
March 24, 2017
Mayor Tory to consult experts, data to advise him on soaring housing prices
March 13, 2017
Follow Brad Wheeler on Twitter @BWheelerglobe
Report an error Editorial code of conduct
Due to technical reasons, we have temporarily removed commenting from our articles. We hope to have this fixed soon. Thank you for your patience. If you are looking to give feedback on our new site, please send it along to feedback@globeandmail.com. If you want to write a letter to the editor, please forward to letters@globeandmail.com.
Comments