Adam Nobody was face down, his arms held behind his back, and a police officer's fist smashing into his face, a now infamous video shows. He had left his house to see what the G20 protests were about.

Now he was under arrest. His case has become the collision point for those demanding a public inquiry into the policing of the G20 protests.

What Mr. Nobody says happened next wasn't caught on tape. He said in an interview with The Globe and Mail that after being led behind a police wagon shielded from public view, another officer asked him his name. "Adam," he replied. He was again face down, an officer's boot resting on his head.

"Adam what?" the officer asked, according to Mr. Nobody's recollection.

"It's my name," Mr. Nobody said he told the officer. The officer pulled the man's ID from his back pocket. "Shit," he said. "This guy really is a Nobody."

Mr. Nobody ended up with a shattered cheekbone, and a broken nose. Blood poured from his head. His eye was swollen shut.

The Special Investigations Unit, which is charged with investigating police, said the video of his arrest at Queen's Park was evidence of a "probable use of excessive force," but did not lay charges. Toronto police chief Bill Blair said on Monday the video evidence of Mr. Nobody's arrest, uploaded to YouTube, was "tampered with," and that the missing seconds would explain why he was arrested. He said on radio Monday that his impression was the police were dealing with a "violent armed offender."

On Monday night, John Bridge, who shot the video of Mr. Nobody's arrest swore an affidavit that contradicts Mr. Blair's assertion. He said Mr. Nobody did not attack any of the police officers, and was not armed.

Mr. Nobody said he was troubled by Mr. Blair's comments.

"After all I've been through. ... It's too much. It's uncalled for. Very deliberate on his behalf and I do not appreciate it whatsoever," Mr. Nobody said.

Mr. Nobody is a 27-year-old freelance stage builder. He said he changed his name from Adam Trombetta about two years ago because it made for better puns. He suggested the headline for his story should be Nobody hurt at Queen's Park.

On the morning of June 26, the Saturday of the G20 summit, Mr. Nobody heard about the protests but wasn't much interested. Eventually, he wandered over to the designated protest area at Queen's Park to see what was going on. Bored, he went to buy some beer and a poster board to make his own protest sign. When he returned to Queen's Park he busied himself with his sign, a joking homage to an episode of Beverly Hills 90210, which read "Let Donna Graduate."

"I thought it would be funny," Mr. Nobody said. As he finished writing, a line of police approached from behind. He started to back away, and then an officer charged at him. Mr. Nobody said he turned and ran. He threw away his bag, and then the officer dove and tackled him. This is the sequence that can be seen on the YouTube video.

"The next thing I know, there's cops on top of me punching me, kicking me in the face, having at me," Mr. Nobody said. "People around us are just screaming, "What are you doing. You've got him. Stop beating him.'"

The SIU investigators identified two officers who were the subject of their investigation, but those officers declined to be interviewed, as is their right. The SIU concluded it could not lay charges. Mr. Blair has not said whether the officers are members of the Toronto police or officers brought in from elsewhere.

Mr. Nobody said he remembers thinking, as the blows kept coming and the world became a shiny haze, "I can't believe this is happening to me.

"Not only was it a beating, it was humiliating. It was like I was nothing."

Mr. Nobody said several officers laughed later on as he was beaten behind the police wagons. He was charged with assaulting a police officer, and obstruction of a police officer. Mr. Nobody's defence lawyer Christopher Murphy said the Crown withdrew the charges.

"They had no evidence," Mr. Murphy said.

Mr. Nobody spent 31 hours in jail. He spent three days in hospital. He went through several hours of surgery to repair his broken nose. He couldn't lie down to sleep.

He has retained lawyers Julian Falconer and Sunil Mathai. They have up to two years to decide whether to bring a lawsuit. In the meantime, they are asking the SIU to reopen the investigation.

One of the key questions is who arrested Mr. Nobody. The officer listed on the arrest record provided a badge number that doesn't correspond to anyone on the Toronto force, according to the SIU, or to any officer believed to have worked in G20 policing.

At his court appearance last month, the Crown conceded that there was no evidence to support the assault charge. The Crown lawyer said the officers' notes did not indicate an assault had taken place. The Crown also said Mr. Nobody's "assaultive behaviour" did not amount to reasonable and probable grounds for arrest.

"The Chief of the largest police service in the country has made an allegation of fabricating evidence against Mr. Nobody and Mr. Bridge in circumstances where, apparently, according to the arrest document, the police have falsified a badge number," Mr. Falconer said. "The police refuse to come forward to acknowledge who beat Mr. Nobody. This is the stuff of totalitarian regimes." 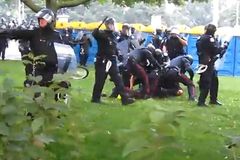 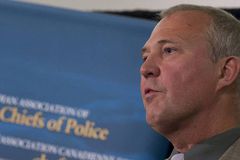 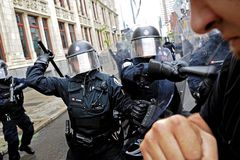 Cameras, sound cannons among G20 equipment Toronto police aim to keep
November 15, 2010
Follow Joe Friesen on Twitter @FriesenJoe
Report an error Editorial code of conduct
Due to technical reasons, we have temporarily removed commenting from our articles. We hope to have this fixed soon. Thank you for your patience. If you are looking to give feedback on our new site, please send it along to feedback@globeandmail.com. If you want to write a letter to the editor, please forward to letters@globeandmail.com.
Comments