A private school in Toronto is taking this into account, developing a first-of-its-kind protocol to help students reintegrate academically after a brain injury.

St. Michael's College School will host a symposium in the spring to share the details of its Return to Learn program.

The school of about 1,100, which has a reputation for sending alumni on to the NHL, has already assisted nearly 30 students with concussions this academic year. Parents, teachers and doctors say the school is filling a void left by recovery protocols that emphasize athletics over academics.

"There's a lot of focus on the return to play but not on the return to the classroom, where the kids can have a number of difficulties due to their brain injury," said Corinne Kagan, a program director at the Ontario Neurotrauma Foundation.

The classroom demands that students listen, learn and think, all of which involve brainwork. Some of the symptoms of a concussion, such as headaches, dizziness and trouble concentrating, can make this even more difficult.

What St. Michael's has developed, Ms. Kagan said, is "a very good thing."

It aims to help students like Christian Karayannides, a 17-year-old hockey and rugby star who retired from contact sports last spring after his fourth concussion in three years.

His brain is still recovering. On a recent Grade 12 English quiz, Christian realized he couldn't remember the names of the main characters in Othello, a Shakespearean tragedy he'd re-read minutes earlier.

"I used to study the night before and I'd be fine," he said. "Now I find I'm not as able to follow the lesson, smaller things confuse me, and I have to put in a lot more work."

It was Barbara Csenge, the school's Director of Learning Enrichment, who noticed students, including Christian, were attending class despite splitting headaches or nausea. Some weren't even disclosing their injuries to their teachers.

"Many students are chomping at the bit to get back to class," she said. "They've got scholarship money or competitive university programs on the line."

Last year she developed Return to Learn as a six-level graduated program. It starts with full bed rest at home, and incrementally reintroduces class time, screen time and homework.

Through each step, Ms. Csenge acts as a co-ordinator between parents, doctors, coaches and teachers. When the student experiences a week symptom-free, he is allowed to progress to the next level.

Ms. Csenge worked with medical professionals, including a professor of neurosurgery at Toronto Western Hospital, to develop Return to Learn and is monitoring its effect on mental health and academic outcomes. She has noticed that those who don't push themselves through the levels are making a better recovery.

Some teachers have raised concerns that the program keeps students out of the classroom for too long. Ms. Csenge has seen students and parents become impatient, too.

"They're just high performers and it's hard to deprogram that," she said.

Two of Christian's concussions happened during hockey games, and one involved a shoulder to the head at rugby practice. After his fourth, when he was punched in the head at a party, he and his family decided it was no longer worth the risk. This summer Christian had to tell recruiting rugby and hockey coaches from American universities that he was no longer competing.

His hopes for a sports scholarship gone, he's rethinking the future. He wants to go to McGill, but his injuries may have dashed that dream as well. Christian was only able to write three of 12 exams last school year and his marks have suffered, leaving his average in the mid-80s.

He said the Return to Learn program has been helpful because Ms. Csenge handles talking to his teachers. Christian said he used to feel like he was being "needy" when he told his teachers about his headaches and trouble concentrating.

"There's no reason why [this program]shouldn't be in place in a lot more schools," he said.

It's all in the neck

An athlete's best defence against concussions could lie just below the helmet, at the neck.

A group of researchers suggest an unusual approach to brain-injury prevention in an upcoming issue of the journal Neurosurgery – one that relies on slightly snug collars.

Reducing flow through the neck veins that drain blood from the head tops up the fluids that surround the brain, allowing for more cushioning, according to Joseph Fisher, a University of Toronto anesthesiologist and one of the study's authors.

He compares a helmet to the sheet metal that encases a car: Upon impact, it can't stop the contents of the vehicle from jostling around.

"Helmets basically prevent trauma to the skull, but don't protect impact to the brain," he said.

The fluid around the brain does that. It can act like a seatbelt, or an airbag, but it needs to be topped up in order to be most effective.

Most of the time it's not topped up, and there's a little extra space that allows the brain to slosh around. But Dr. Fisher and his colleagues determined the amount of pressure – about the equivalent of a shirt collar half-an-inch too small – it takes to stop the sloshing.

They conducted trials in rats, and compared the damage to the brains of rodents in collars to those without after a controlled injury.

"There was a dramatic reduction, one that's never been seen before to my knowledge, in the markers of brain injury," Dr. Fisher said.

If they work, the collars could prove an affordable and effective tool for brain-injury prevention. Dr. Fisher and his colleagues hope to begin human trials as soon as possible. 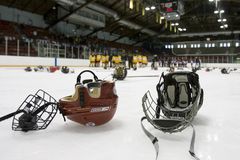