The genesis of this season's most sought-after Christmas item started two years ago in a faded stucco office overlooking the GO train tracks on Front Street West, as employees at the toy company Spin Master chatted about the popularity of YouTube "unboxing" videos.

From those discussions, they came up with the design for Hatchimals, robotic toys that have sparked a frenzy on both sides of the Atlantic this fall.

Whether in Britain, Canada or the United States, anxious parents have lined up outside stores in the morning in vain attempts to find the sold-out toy. One Canadian Tire outlet in Ontario sold its stock of 36 Hatchimals by opening its doors at 7 a.m. Friday, and limiting the sales to one item a household – "and ID will be required."

As retailers struggled to restock their shelves, Spin Master is now flying Hatchimals from its factories in China rather than shipping them by sea. And, inevitably, resellers appeared on eBay or Kijiji, asking for hundreds, even thousands, of dollars for a toy that retails for $69.99.

The Hatchimals' conception shows how the Toronto company, founded by three friends in 1994, has become a top player in the unpredictable, highly competitive world of toy-making, where success depends on the ever-shifting tastes of young kids.

Spin Master had high hopes when it rolled out the Hatchimals in early October, but it didn't expect the ensuing response, said James Martin, the company's head of robotics.

The company had expected the toy would be a hit with girls between the ages of six and eight, but found it was also popular with boys and older kids.

Toy sales tracked by the NPD Group market-research firm showed that in late October, different versions of the Hatchimals were holding the first, second, sixth and ninth spots in a list of the top 10 items sold in the United States.

Hatchimals are no longer among the top-selling items, but only because they are no longer on the shelves, said Juli Lennett, senior vice-president and U.S. toy-industry analyst for NPD Group.

"There is always a hot toy at Christmas. This is definitely different," she said, adding that the Hatchimals' popularity was on a scale similar to past runaway successes such as the Cabbage Patch Kids dolls in 1983-84 or the Tickle Me Elmo plush toy in 1996.

The toy's success comes from the sense of anticipation it creates, Ms. Lennett said.

The Hatchimals are furry, bird-like creatures that are each sold inside an eggshell that's about two-thirds the length of a football. Children have to cuddle and pat the egg for about half an hour before the creature inside hatches.

Once outside its shell, its skills evolve as it interacts with the player, mimicking a living being's growth from infant to toddler and beyond.

Some of the company's past hits, such as the Bakugan line of toys or the Zoomer electronic animals, came from pitches by outsiders, inventors or designers who found more open minds at Spin Master than at other companies.

Hatchimals, however, were an in-house idea, the brainchild of Spin Master's Toronto-based advanced-concept team.

A couple of years ago, team members were talking about the recent popularity of "unboxing" videos on YouTube, where people record themselves unwrapping gifts or reaching for the toy inside a Kinder Egg candy.

This led to a discussion about the thrill of toys that come hidden in packages, Spin Master's Mr. Martin recalled.

"We were talking about that one day and how magical that is … and we said, 'Wouldn't it be cool if instead of you opening it, it opens itself?'

"And that evolved into, 'Wouldn't it be cool if we could actually make something that could hatch itself out of an egg?'"

Spin Master had already shown its robotics savvy with the Zoomer, a line of interactive robot animals. The Zoomer's original concept was a remote-controlled truck, another example of Spin Master's ability to tweak an initial idea into a more alluring, profitable product.

For the Hatchimals, the company had to create a material that mimicked eggshells, hard enough to meet safety standards but breakable when it was time to hatch. The Hatchimals also have heat sensors to detect when they are being held and cuddled. An engineer in Hong Kong designed the latching mechanism that powers the toy when it is pulled from its package.

Unlike many other toys, Hatchimals don't connect to an app, because the company's research showed that parents want to limit the amount of time kids spend in front of computers.

The marketing campaign, however, didn't shy from digital screens.

Hatchimals were featured, for example, in TV commercials for Game Shakers, a top-rated TV kids series. The commercials also appeared on YouTube and Facebook.

Lee Coutts, a Burlington, Ont., resident looking for a Hatchimal, said her six-year-old granddaughter, Madelynn, heard about them from YouTube.

Madelynn had expected one for her birthday, three weeks ago, but was told she would have to wait for Christmas.

For a month now, Ms. Coutts had phoned and visited stores in vain, searched online with no success.

Meanwhile, in Paramus, N.J., Dottie Russo, a mother of two, said that every morning for the past two weeks, after dropping her children at school, she would line up outside one toy store after another.

"Every year, there's a hot toy and there's always parents who can't get that hot toy," she said.

Any reasoned appeal that parents could wait until after the holidays wasn't going to placate her eight-year-old daughter or the 10 other parents she knows who are also hunting for Hatchimals.

Ms. Russo said she didn't want to spoil her daughter, but she felt that parents don't want to disappoint their kids when the gifts are unwrapped on Christmas morning.

"It creates a heartbreak for the kids, and when the kids are sad the parents are sad."

Ms. Coutts said she had tried to explain to her granddaughter that the Hatchimals might not be there on Christmas Day.

"She told me not to worry because Santa has all the toys and would bring it." 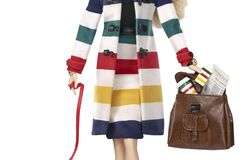