At the end of a recent hiring process, recruiting firm IQ Partners believed it had found the perfect candidate for a vice-presidency with the Canadian Professional Sales Association. He ticked all the boxes – a senior executive in the field with the right résumé and the requisite expertise. He wanted the job, too. But he turned it down for one reason: Toronto's housing prices.

After looking at listings, the candidate realized he couldn't afford a "comparable home" in a move from Mississauga to a neighbourhood closer to the CPSA's downtown office.

"Despite it being a very attractive job and being interested, he decided to decline simply because of the complications around home prices," said IQ Partners' managing partner, Bruce Powell. "These situations happen all the time."

Increasingly, recruiters and employers are grappling with apprehensive job seekers who simply aren't sure Toronto warrants its soaring real-estate prices. Typical wage gains have fallen far behind housing prices, which jumped more than 30 per cent in the past year. The issue appears to be most acute with executive positions, which attract talent with higher housing expectations.

"This is a state of emergency right now," said Toronto Region Board of Trade president and chief executive Janet De Silva about the need to reduce housing costs to avoid seriously damaging the local job market. "The challenge is that at a certain point, it's both the housing market and the lack of regional transit, and it's a double whammy."

Twice in the past month – at a dinner with international CEOs and during a visit from a Saudi Arabian delegation – Toronto's international business community identified the looming housing crisis as a "top of mind concern," Ms. De Silva said.

"It's just the overall cost of doing business in Toronto and their ability to recruit in the talent that they want," she said.

As a result, recruiters are seeing candidates take jobs closer to their bedroom communities, forcing businesses to either move out of the city or toward its core.

He believes that if IQ Partners wasn't located across from Union Station, many of his own employees, who commute by GO train from places such as Ajax, Barrie, Milton and Oakville, wouldn't be able to work for him.

Women, in particular, are choosing to abandon job searches, unable to juggle the cost of housing with families and long commutes, according to Ms. De Silva.

As a result, the Board of Trade has begun research into the impact the tough real estate market has already had on Toronto's ability to attract talent.

Ms. De Silva points out that almost 80,000 new residents are moving into Toronto annually. The Board of Trade estimates the city needs 30,000 new rental units to match that flow. With just 1,500 new units each year, Toronto is nowhere near matching that target.

"We need to fast-track more rental properties," Ms. De Silva said. "[We're in] panic mode, where folks feel like if they don't get in now, they're never going to be able to afford it."

Not all firms or sectors have felt the same impact, however.

Sean Kogan, a managing partner with staffing firm Recruiting in Motion, deals with job classes that fall below the traditional $150,000 cutoff for executive status. RIM matches candidates primarily in the $60,000 to $80,000 salary range. Mr. Kogan says that job market remains buoyant and the flow of candidates hasn't yet slowed.

But he has his concerns.

"I think it might [slow]. I can't imagine that if [housing prices] keep going up we won't see an impact," he said. "The price of jobs has not gone up nearly to the extent that the real-estate market has gone up."

Mr. Powell says it's easier now to hire for entry-level jobs than for senior positions because there's a higher proportion of young workers, in the early years of their careers, living in condominiums closer to the downtown.

"It's this interesting dilemma where we can help a company like CPSA hire their sales reps more easily than we can help them hire their VP of sales," he said.

"Tech companies based in Toronto offer wonderful perks like subsidized lunches and gym memberships, but when you get down to it, salaries aren't changing and they aren't reflective of the housing market," she said. "Those perks are great, but they don't pay the rent."

In the creative world, companies are increasingly moving to Hamilton to attract younger, cheaper talent. Animation studio Awesometown Entertainment is one of several creative companies to move to Toronto's neighbour to the west, according to Glen Norton, the director of the city's economic development office.

just so big, and here you can make a name for yourself and plug into a network," Mr. Norton said.

"It makes it really easy for us to hire juniors who, when they're coming out of school, it's much more affordable to reside somewhere closer to Hamilton," Awesometown president Lucas Lynette-Krech said.

Hamilton's real-estate prices are soaring too, though. And Mr. Norton fears young people may begin to bypass the city to move even farther out, to communities such as Brantford. 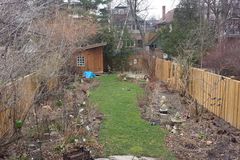 Toronto eyes vacancy tax to rein in real estate speculation
March 30, 2017
Hot real estate market forcing landmark musicians out of Toronto
March 24, 2017
Follow us on Twitter @globeandmail Opens in a new window
Report an error
Due to technical reasons, we have temporarily removed commenting from our articles. We hope to have this fixed soon. Thank you for your patience. If you are looking to give feedback on our new site, please send it along to feedback@globeandmail.com. If you want to write a letter to the editor, please forward to letters@globeandmail.com.
Comments