Blue bin battle: How Toronto is fighting to keep your recycling garbage-free

The Globe follows the contents of Toronto's blue bins from the curb to the processing facility, and finds everything from coffee cups and plastics to snakes and bowling balls. Now the city may consider fining those who recycle recklessly.

You know that paper Tim Hortons or Starbucks coffee cup? It's not recyclable in Toronto. It's garbage. Who knew, right?

From coffee cups with wax linings to black plastic (including bags), bed sheets to car parts, and even dead pets – they're all items wrongly thrown into Toronto's recycling blue bins each year. In fact, a quarter of all things sent to the curb to be recycled shouldn't be there, according to city figures. Sorting the garbage from the recycling costs millions of dollars annually.

So the city is implementing a pilot project hoping to re-educate Torontonians about what is and is not recyclable.

Dubbed "Recycle Right," the six-month pilot has summer staff hitting the streets hours ahead of collection trucks to inspect – and tag with yellow warning tickets – blue recycling bins that appear to be sorted improperly. 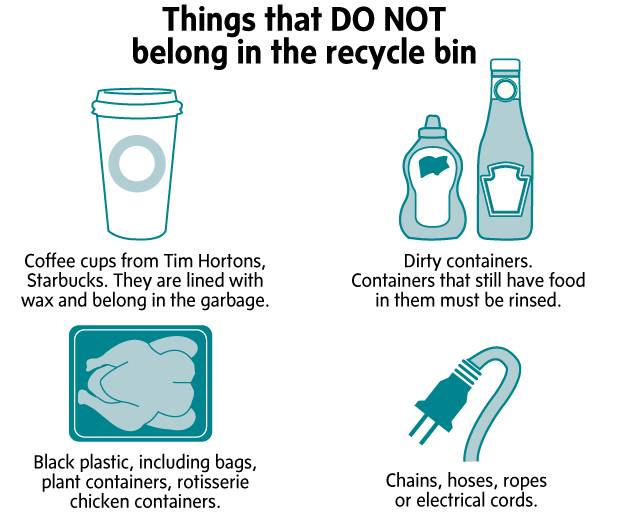 City staff say that, each year, the city resells about $20-million worth of recycled materials back into the market. But it's looking to reduce its costs from the $5-million it pays yearly to separate the garbage incorrectly mixed in with recycling by city residents.

On a sunny morning in June, Kyle Oliver worked with his colleague Shelby Watt on Sword Street in Cabbagetown. If the bin looks "25-per-cent contaminated," Mr. Oliver and Ms. Watt tag it with a yellow warning and a recycling pamphlet. The bin then gets left unemptied on the curb, a tactic the city hopes will result in its owner doing a better job at sorting recyclables.

"When you do a small street like this one, people run out and say, 'Whoa! Whoa! Whoa! What are you doing?'" Mr. Oliver said as he spots a bunch of black-plastic flower planters that were put out for recycling. "Yeah. These pots. Black plastic. They're not recyclable."

The words aren't out of his mouth when the homeowners, Bill and Jacqui Jeffers, come out with their morning mugs to meet Mr. Oliver on the sidewalk.

"It's awful because when we bought these plants, we asked, 'Can we bring these [black planters] back?' And the woman at the nursery said, 'No, just put them in your recycling,'" Ms. Jeffers said. "It's lazy, I should have read up."

Staff will recheck the Jeffers' blue bin in two weeks, to gauge if residents are learning anything from being tagged, said Rob Orpin, director of collections and litter operations with the City of Toronto.

The pilot project will wrap up later this summer. Mr. Orpin said that, at its conclusion, the city could start issuing tickets and fines for blue bins that contain garbage, depending on what the data indicates.

"Those next steps could be the implementation of a fee associated with putting out contaminated recycling," Mr. Orpin said, adding the move would need to be approved by council. "We have not made that determination yet."

From the curb on Sword Street in front of the Jeffers' home, their blue bin is emptied into a city collection truck. That truck then makes its way to a "filtering facility" – where the recycled waste from multiple collection trucks is loaded onto a tractor-trailer and hauled to the Canada Fibers Ltd. sorting facility near Highway 400 and Sheppard Avenue West. 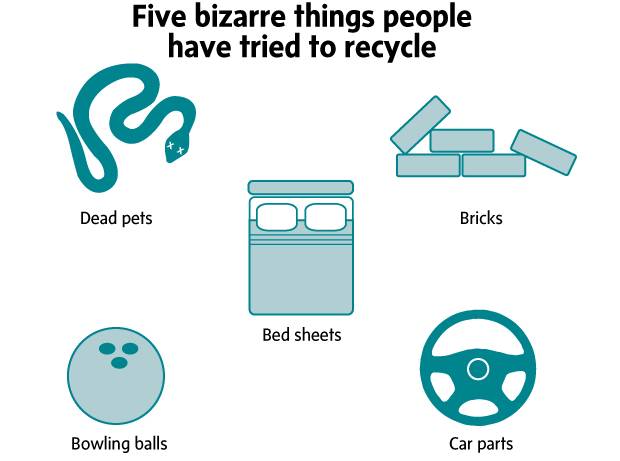 Forty of those tractor trailers collectively haul 800 to 1,000 tonnes daily to the facility. Over the years, some odd stuff has found its way there: car parts, bricks, hoses, bowling balls, lumber and teddy bears. The list goes on.

"There's been a snake that's come through here before. Dead. But very large. So things like that [which] come through are pretty sad," said Nadine Kerr, the city's manager of processing operations. "I don't know how those things actually end up in the blue bin. It could be somebody actually putting it there. It could also be illegal dumping. So there is no real way to track that."

The blue bin material goes through a "presort" at Canada Fibers. A large front-end loader scoops up load after load of stuff that has been dumped into a pile. The pile, two-million pounds per about 900 tonnes a day, is the shape and size of a three-bedroom bungalow.

"The supply of recyclables never stops; people expect their blue bin to be taken everyday," said Derek Angove, the plant's director of processing.

The blue bin material is then scooped and dumped into what's called the "entry point" of the "M" or "Machine X", as is written on its side. This massive machine is a mix of black conveyor belts and green steel, held together by a scaffolding of multiple stairways and platforms that employees use to work on, and to get from one end of the machine to the other. "Machine X" is as long and wide as a dozen school buses parked side-by-side, and five buses tall. This is where the real sorting begins, recyclables separated from recyclables, and garbage weeded out.

If you thought deciding what goes into the blue bin at home was a challenge, you should see what this machine does, and what those who run it do. It's tough, dirty work, a mixture of sorting by human eyes and hands combined with magnets, shaking, lasers and sifters that separate tin from aluminum, cardboard and paper from Tetra Pak juice boxes, and plastic wrap from plastic bottles and glass.

At different points on the machine, garbage is visually spotted and then manually removed.

"The weirdest things I see, maybe car parts,"said Mable Obeng, as she works the conveyor belt grabbing bits of garbage by hand.

The 45,000 tonnes of garbage that lands at this recycling plant each year is sorted and pulled from the machine at multiple points, and is then either put aside or directed into a garbage can, or redirected on the conveyor system that runs the garbage to a compactor.

For business interests, Stephen Miranda of Canada Fibers wouldn't divulge the exact specifics about how the machine does its sorting, however the general process is a mix of technology and manual labour and goes like this:

Removing, sorting and organizing properly recycled material from garbage, as well as one recyclable material from another, is a mixture of technology and manual labour. Large sheets of recyclable plastic are removed early in the process so as to not obstruct employee's views of material as it whizzes along the conveyor belts. Staff says one of the reasons black plastic is not recyclable is because plastics are mostly sorted by laser-like devices as they pass along the machine. The laser is unable to differentiate black plastic from the clear, green and other types of polymers that can be recycled.

Elsewhere on the conveyor highway, magnets are used to pull metals from the rest of the waste. Frequently, a conveyor belt will stop when something – usually a piece of garbage – jams the machine. The whole process takes a few minutes to separate steel from aluminum, aluminum from glass, glass from plastic and plastic from paper.

Each sorted "commodity" then takes its own route to a baling machine that compacts and presses the material into square units about the size of hot tub. Large units of baled recycled material clutter the plant's floor: bales of silvery aluminum, duller tin-metal, and plastic and paper. The bales are then auctioned off and the winning bidder then turns the contents of the blue bin back into recycled boxes, jugs, paper, cans or even home insulation.

As for the garbage that made an unnecessary and time-consuming stop at the Canada Fibers plant? It goes to the dump. "It's all about getting the garbage out as quick as possible," said plant manager Stephen Miranda, who has been with the company since 1996 and has seen many changes to recycling.

"Then it was mostly paper and fibers, now it is a whole bunch of things. Ever since the blue-bin list of menu items exploded, so to speak," Mr. Miranda said.