Mississauga is the archetypal Canadian suburb, a place of cookie-cutter subdivisions and strip plazas, connected by wide arterial roads. But if its planners have their way, its centre will be transformed within a decade into something else entirely. People from all walks of life will inhabit mid-rise buildings, socialize at sidewalk cafes and browse independent businesses.

This plan is part of a broader trend among GTA suburbs that are seeking to build urbane, walkable cores in the midst of the sprawl outside the city.

What these municipalities are trying to do is unprecedented on this scale in North America. The idea – placing mini-downtowns in far-flung locations, separated from inner-city Toronto by vast stretches of tract housing – runs counter to the traditional model of urban growth. Not everyone is convinced it will work.

"To me, it's mildly insane – it's like building more subdivisions," says Robert MacDermid, an expert in municipal politics at York University. "Instead, you should be intensifying from the core [of Toronto] outward."

But if downtowners raise their eyebrows at the prospect of finding urban vibrancy in the 905, suburban municipalities see these developments as a necessity. Mississauga, for instance, is quickly running out of land to grow outward. Provincial regulations oblige cities to put 40 per cent of new development inside their current borders.

Underpinning all of this is a desire among suburban municipalities to build better, more distinctive neighbourhoods, places with more verve and character than the sprawl around them.

"You have these communities here, and where do people go to entertain themselves? Where do people go for culture?" asks John MacKenzie, commissioner of planning in Vaughan. "How do we create places that are more fun, exciting, attractive and mixed-use?"

The answer, in Mr. MacKenzie's city, is Vaughan Metropolitan Centre, which will be built around the future terminus of the Spadina subway at Highway 400 and Highway 7. Residential towers, office buildings and a tight street network are part of the plan.

To the east, Markham is in the midst of a similar project. A series of mid-rise condominium buildings and row-houses now fill the blocks west of the Unionville GO station. Nearby, a complex of shops, restaurants and a movie theatre is under construction, soon to bring commercial activity to the street.

It's exactly the opposite method of development from that of older urban neighbourhoods. Inner-city Toronto didn't come from a neat master plan; it evolved slowly over time, the product of constant change and sheer accident.

The Victorian-era businessmen who raised buildings along Queen Street West had no idea that, generations later, OCAD students would make the thoroughfare a centre for the arts. The industrialists who built warehouses on the Weston rail corridor never intended that those places would one day become lofts. The politicians who championed the Gardiner Expressway didn't plan for the road to depress property values in Parkdale and create the right conditions for a diverse immigrant community to develop.

Downtown Mississauga today demonstrates the difficulties of trying to achieve this sort of urbanity from scratch. Over the last forty-odd years, the area has seen the construction of a new city hall, a performing arts centre and an impressive array of condominiums -- from a distance, the high-rise skyline towers over its surroundings -- but at street level, it doesn't quite feel like an inner city.

There are large gaps between many buildings, few pedestrians on the sidewalks and numerous big-box stores -- not to mention all those parking lots. Walk the streets after dark, and the sparse nightlife quickly reminds you that you are in the suburbs.

Mississauga's current plan, adopted in 2010, addresses these problems. It aims to concentrate development in the next few years along that new Main Street south of Square One, in order to create a seamless and walkable streetscape. It also demands that buildings come all the way out to the sidewalk and provide at-grade retail, which the newest condominium complexes are doing. It envisions smaller blocks and a new light-rail line to service the area.

Mississauga also took a big step forward by renovating a plaza in front of city hall, installing a wading pool, a stage and Jumbotrons to provide a public meeting place and a venue for events. Since it opened last summer, Celebration Square has seen roughly a million visitors. A new Sheridan College campus, meanwhile, has brought students to the area.

At the moment, the city is working on a comprehensive zoning regime to enforce the downtown plan. Developments that fit with the plan already, however, are allowed to move forward and several are proceeding apace.

Staffers are also assembling a business case for the Main Street area, which will include an open-air farmers' market, to encourage landowners and developers to buy in.

"We're looking at the feasibility of a public market, getting the financial ideas together," says Gary Kent, director of corporate strategy and innovation. "[Main Street] could happen in the next five years."

Other municipalities are also planning in detail to create the conditions for vibrancy.

Vaughan, for instance, wants to incorporate affordable housing units in these new developments to ensure the area attracts a demographic mix. The city has also set up a design review panel to push for varied, aesthetically-pleasing architecture.

Markham, meanwhile, is orienting its downtown along a spine of public transit, where dedicated bus lanes anchor development.

And all three suburban cities understand the need to mix uses, putting condos, offices, restaurants and theatres within easy walking distance of one another.

"I don't want this area to be a collection of high-rise buildings where people drive into their underground parking, go up to their unit, go back down to their car," says Markham mayor Frank Scarpitti. "I want them to actually get out of their condominiums, meet each other and experience the community."

How well these plans will work is difficult to judge, as there is no precedent on the same scale in North America. Andre Sorensen, a professor of urban geography at the University of Toronto, points to developments in Japan where viable urban cores have been built in the sprawl around Tokyo. He identifies one key factor.

"Translating some trips into pedestrian trips or bicycle trips or transit trips – that's actually the key thing. It's not just vibrancy or having active streets. It's getting people out of cars," he says.

To that end, he thinks the plans in the 905 will work. They won't exactly look like Yonge or Bloor or Queen Streets – the lot sizes and the buildings are bigger, meaning the integration between offices, apartments and nightlife won't be as seamless as it is in inner-city Toronto – but these developments are all centred on a transit hub and they provide for the sort of small, compact blocks that make it easier to walk.

And perhaps most importantly, simply sitting back and allowing development to happen where it will – the post-war paradigm in this country – is not an option for those who want to build better cities.

"We're directing growth where it needs to happen -- not just where the market takes it. That's how you get quality development at the end of the day. We want to take the time to get it right," says Marilyn Ball, Mississauga's director of development and design. "We are writing the book on a suburban municipality's shift to a vibrant city." 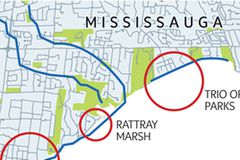 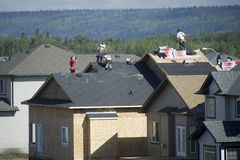