Seventeen years after a Jamaica-born career criminal awaiting deportation fatally shot one Toronto police constable and badly wounded a second, the federal Immigration Department has acknowledged its failings in the tragedy by settling a multimillion-dollar lawsuit filed on behalf of the families of the two officers.

Terms of the agreement, which appears to have no precedent, were not disclosed.

But when the Toronto Police Association launched the action in September, 1994, a few weeks after Constable Todd Baylis was murdered and Constable Mike Leone injured in a gun battle at one of west Toronto's toughest housing projects, the plaintiffs were seeking more than $10-million, including a $5-million claim against what was then the Department of Citizenship and Immigration.

A parallel $5-million claim, less likely to be resolved, was lodged against convicted killer Clinton Gayle, now serving life imprisonment in a Kingston-area penitentiary for first-degree murder and attempted murder.

The matter was to have gone to trial in October, following years of tangled pretrial arguments and motions.

None of the parties would comment on the contents of the accord, negotiated for the TPA by lawyer Tim Danson and outlined in the current issue of Tour of Duty, the union's in-house journal. But the TPA's new president, Mike McCormack, who made settlement of the suit an early priority, said the two officers' relatives were content.

"There was a really strong commitment by the association to the Baylis and Leone families, and we pulled out all of the stops, we said, 'Let's move this thing forward,'" he said. "It was very important for us to get a resolution. It had dragged on for too long."

Mr. Danson concurred. "I've been doing this for 31 years, I've acted for a lot of victims and this [case]was a really tough one. These are great people, and I just think that it's good they can now move on with their lives."

Constables Baylis and Leone were shot on the hot, muggy night of June 16, 1994. They were on foot patrol in a public-housing complex on Trethewey Drive when they encountered Mr. Gayle, a 26-year-old veteran drug trafficker who had with him a fully loaded 9mm handgun and pockets filled with bags of crack cocaine.

Neither officer knew Mr. Gayle, or was aware that since 1991 he had been under a deportation order because of the numerous criminal convictions he had accumulated, for drugs, weapons and assault.

That order had not been enforced because while in jail he had appealed the order, and in 1992, on completing his sentence, he was allowed to go free by an Immigration adjudicator, on $2,000 bail posted by his mother.

Mr. Gayle's appeal subsequently failed, but Immigration didn't know that because in the meantime the department lost his files. Then, when officials did catch up with him and tried to expedite his removal to Jamaica, which he had left at the age of eight, they did not provide the requisite travel documents but rather told him to visit the Jamaican consulate in Toronto and get them himself.

Instead, he vanished into the underworld.

"Quite simply, the system failed," associate deputy immigration minister Ian Glen later said at a federal inquiry. As to why, he explained that the department's priority at the time was to target unsuccessful refugee claimants who were on the run rather than criminals, because that way the deportation numbers were higher.

The bungled case was instrumental in a subsequent overhaul of the way immigrants with criminal records are dealt with.

But Immigration's willingness to pay compensation for its role in a murder seems to be a first.

"It's certainly highly unusual," said Toronto lawyer Barry Swadron, who over the years has launched numerous lawsuits against governments of all levels.

"I haven't heard of a case of this nature." 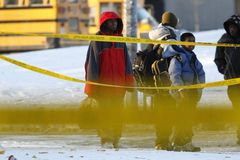