Sometimes a death is more than a loss or a tragedy. Sometimes it is a challenge. When he died Monday, aged 54, David Pecaut threw down a dare to the people of Toronto.

Will we have the wisdom to learn from his rich life of can-do city building? Or will we fall back into the cynicism and apathy that is the dark side of our civic character?

As Toronto's leading urban mover and shaker for more than a decade, Mr. Pecaut pioneered a form of civic engagement that, before him, was all-but alien to this dour metropolis by a cold lake.

Torontonians are expert at saying what is wrong with their city. The TTC is run down. City council is dysfunctional. Plans for a new waterfront never go anywhere. Like the prairie farmers who once said "goddamn the CPR" whenever the crops failed, we tend to blame government for all our civic disappointments.

David Pecaut never blamed anyone. He simply rolled up his sleeves and got things done.

He called the premier. He bent the ear of a newspaper editor at a cocktail party. He bugged a Bay Street mogul for funding. Before long, he was chairing an action committee. If he decided that the Rogers Centre needed to be covered by a giant tea cozy on cold winter nights, he would soon have half the big shots in the city knitting round the clock.

The message of his life is that you don't need to beat City Hall. You can go around it. Rather than wait for the creaking cogs of official machinery to turn, he learned to build networks of interested parties, private and public, that could forge ahead on their own.

He built the Luminato arts festival that way, founding it with businessman Tony Gagliano and making it such a success that government came on board with big money.

He did the same thing with the Toronto City Summit Alliance, a wide coalition for urban change that took on issues from transit expansion to urban poverty.

"David got impatient," said William Thorsell, chief executive of the Royal Ontario Museum. "He'd say, 'let's not just sit there and mumble about why we're so frustrated. Let's just go out and do it - and tell City Hall when we're done.' " He called himself a civic entrepreneur, using modern business methods such as networking and team-building to tackle problems that government alone could not. He drew people together from every sector - arts, labour, government, business - to brainstorm about the big issues and hammer out solutions. One friend describes him as a human sparkplug.

In approach, he was still very much an American despite his decades-long love affair with his adopted city, bringing with him that gung-ho spirit of volunteerism and philanthropy that has helped build great cities like New York or Chicago. He lacked our silly fear of having private interests involved in public projects.

His skill and energy were so great that it is fair to ask whether anyone can take his place. In one sense, the answer is no.

Mr. Pecaut was an unusual person, to say the least. He was a Harvard-trained consultant and passionate policy wonk. He talked a mile a minute about an often-bewildering number of things. He had the persistence of a terrier. Once, I made the mistake of saying No when he wanted to talk to the Globe's editorial board. He called me back; he called again; he e-mailed to insist; he went over my head to the editor in chief. He got the meeting.

Yet, as deeply as his loss will be felt in this city, there is no reason that others should not carry on where he left off. Mr. Pecaut himself desperately hoped we would not lapse into our old, lazy, government-dependent ways. He noted that the seven major cultural projects built in Toronto in the last few years, including expansions of the ROM and the Art Gallery of Ontario, were written off as impossible to fund before private interests rallied to the cause.

In his last testament, released last week when he was losing his fight for life, he said that, too often, Torontonians ask why things don't work in the city, why we are stuck in gridlock or, "worst of all," why we lack the resources to make things happen. All they need to do is work together. Resources will follow.

"This city," he wrote, "is full of conveners, of civic entrepreneurs, of people who understand in their collective DNA how to bring all the parts of civil society around a table to solve problems, seize opportunities, and make great things happen."

David Pecaut gave this reserved and often cranky city a brilliant example of how it is done. It falls to all of us to pick up the torch. 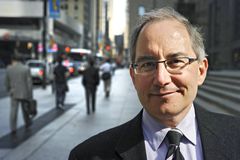 Canadian culture gets a surprise lift
May 1, 2018
Follow Marcus Gee on Twitter @marcusbgee
Report an error Editorial code of conduct
Due to technical reasons, we have temporarily removed commenting from our articles. We hope to have this fixed soon. Thank you for your patience. If you are looking to give feedback on our new site, please send it along to feedback@globeandmail.com. If you want to write a letter to the editor, please forward to letters@globeandmail.com.
Comments