Toronto mayoral candidate Doug Ford hit back at tough questions about his combative style and his record on city council as he appeared on the city's top-rated morning news program Friday morning.

The interview with CBC Metro Morning host Matt Galloway followed a debate on Thursday night where, according to media reports, Mr. Ford seemed to struggle to control his temper.

Mr. Ford, who is running in place of his ailing brother Mayor Rob Ford, used the radio interview to promote his proposal to cut the land-transfer tax while making several jabs at the front-runner, John Tory, portraying him as an entitled person whose SmartTrack transit plan is "pie in the sky."

Mr. Ford sought repeatedly to portray himself as better prepared for the job. "I can hit the ground running," he said. "He doesn't understand city hall."

He also accused host Matt Galloway of not understanding how city hall works, "not being fortright with your listeners" and "going with the John Tory line."

"You weren't there, you don't have a clue," Mr. Ford told Mr. Galloway.

The radio interview took place the morning after a candidates' debate at Oakwood Collegiate that ended with allegations that Mr. Ford hurled insults at another mayoral contender, Ari Goldkind.

Mr. Goldkind had mocked Mr. Ford during the debate, saying "Ford – what does it stand for? Falsify. Overstate. Repeat. Deny."

Mr. Goldkind later told reporters that Mr. Ford swore at him when he tried to shake hands after the debate.

During Friday's interview, Mr. Ford also accused Toronto Sun editorial writers of being "armchair quarterbacks" and ridiculed a University of Toronto policy paper that disagreed with his views.

"One thing about being a mayor is the image you represent. Do you think you're a bully?" Mr. Galloway asked.

"No, and everyone knows that down there, absolutely not," Mr. Ford replied, arguing that he only wants to "stand up for your brother, stand up for taxpayers."

Mr. Ford, a first-term city councillor who initially hadn't intended to run again, filed his mayoral candidacy papers after his brother Rob pulled out of the race to focus on treatment for cancer. Rob Ford is also running to reclaim his old city council seat.

Mr. Galloway asked Mr. Ford why he wanted to be mayor when he signalled last year that he was fed up with city council.

Mr. Ford had described council as being "dysfunctional" and had been heard yelling "I'll whoop both your asses" and "Why don't you shut up and sit down?" at other councillors.

Mr. Ford said Mr. Galloway was "twisting it" and said his brother's administration did get council to adopt some projects, such as rolling back the car registration tax.

When Mr. Galloway mentioned that Mr. Ford missed 53 per cent of 2014 city council votes, the councillor accused him of being "disingenuous with the listeners."

He suggested he was at City Hall every day but was away while council voted on trival matters.

He added "You don't just sit in your chair at council when they pontificate over nothing for six hours."

Mr. Ford also had to explain other past bellicose episodes, such his handling of complaints about the Griffin Centre residential group home in his ward. Reacting to complaints about him by the father of an autistic child, Mr. Ford had said "he can go to hell, I don't even care."

Mr. Ford said he was only being a peacemaker in the controversy, and then turned his own criticism back at his interviewer.

"Matt, let me tell you something, I've never had an interview where someone was so disingenuous to me, in my life," Mr. Ford said, adding that he and the father had reconciled.

Mr. Ford has pledged he would reduce the municipal land transfer tax by by 15 per cent in each year of his four-year term if elected mayor.

He says the $214-million revenue shortcoming can be offset through internal savings and outsourcing more garbage collection.

"You guys have not seen the numbers," he said when Mr. Galloway mentioned media skepticism of his plan.

"There is a difference between cuts and efficiencies," he added.

Mr. Galloway mentioned a policy paper released in August by the Institute on Municipal Finance and Governance at the University of Toronto's Munk School of Global Affairs.

The study said the city does not have a spending problem, as Mr. Ford argues, but rather that property taxes have grown at less than the rate of inflation and are now low compared with other Ontario municipalities.

"That of course, that's the University of Toronto," Mr. Ford said with a smirk. "They can twist the numbers. They haven't been there."

"I don't listen to the armchair quarterbacks … the Toronto Sun," Mr. Ford said when asked about an editorial skeptical of his tax-cutting plan.

However, when Mr. Galloway asked him what he loved about Toronto, Mr. Ford appeared to address complaints about some of his supporters making racist or homophobic remarks. During one debate, one of his supporters heckled Ms. Chow and told her to "go home … back to China."

"I love how multicultural it is," Mr. Ford said of the city, before seguing into a mention of the Ford Fest being "a true snapshot of Toronto" in its diversity.

"We have massive support in the ethnic community," Mr. Ford said. 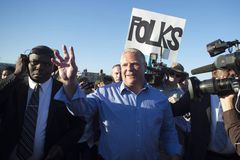 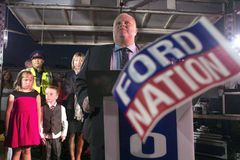 Olivia Chow gets creative in Toronto mayoral debate on arts
May 12, 2018 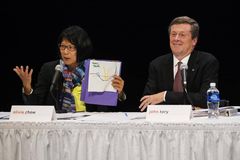 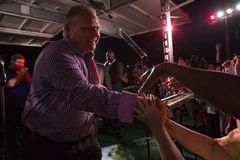 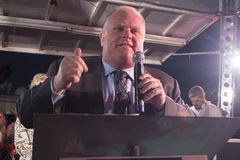