Many of Canada's young theatre artists are drawn to Toronto because of its iconic theatres and the legendary work produced there over the years, and because they hope one day they'll make it onto those stages themselves.

But Alex Johnson and Daiva Zalnieriunis, two recent theatre school graduates looking for their start in Toronto, are instead finding inspiration by distancing themselves from them. At least, geographically.

The Tennessee Project (officially titled Stella Artois Presents: The Tennessee Project) brings together nine emerging independent theatre companies for a festival of Tennessee Williams one-act plays. But instead of hunkering down in the studio spaces of the city's bigger, established theatres, as the Toronto Fringe and SummerWorks festivals do, TTP is hopping on the TTC. From May 1 to May 7, the companies will rotate their performances through seven different neighbourhoods in Toronto – Leslieville, the Danforth, Cabbagetown, St. Clair West, the Annex, Roncesvalles, and North York – performing in non-traditional venues such as bars, restaurants, a framing store, a community centre, and a historical museum.

"It's really difficult to build a new audience when you're working next door to a place like Soulpepper or Canadian Stage," Ms. Johnson says. "So we wanted to take it out a little bit, to venture into new territory."

Originally, Ms. Johnson admits, the idea was mainly to get bums in seats, to bring their shows to busy Roncesvalles and Leslieville families instead of asking them to commute downtown. But in this city of neighbourhoods, they soon realized that their unconventional venues were just as important to the project as the plays themselves.

"We didn't want to put down our stuff and say 'Hey, we're here, we're fabulous, see our show and pay attention to us.' We have no interest in that. We want to build actual relationships, not just take their money and run," Ms. Johnson says.

As the casts and crews found more ways to integrate themselves within their temporary host neighbourhoods, by doing things like volunteering for park clean-ups and community gardens, teaching acting classes for local kids, and hosting Tennessee Williams readings in cafes and bars, TTP acquired another mission: to initiate creative growth around the city, in the model of neighbourhoods in the U.K. and New York City that house theatres whose content reflects the areas' unique personalities.

"At the end of the day, I would love to see the arts and culture scene in general be part of the community fabric, and not something that just plops right in the centre of it. To be more of a partner and a friend," she says.

Events like the Tarragon Spring Arts Fair, which closed down streets with performances, activities, and the occasional garage sale, used to bring that hyperlocal energy to Toronto's theatre scene, says Franco Boni, artistic director of the Theatre Centre. Now, that involvement is much less noticeable.

"It's not obvious what the community engagement is for most theatres. It exists, but in most cases it's not front and centre, and in my opinion it should be. That's what I've been working on doing," he says.

And despite hearing horror stories about the organizational mess of a multiple-venue festival or business owners from hell, for Ms. Johnson, the relationship has proven a beneficial two-way street.

"If we do run into problems, these people in these communities are on it in a heartbeat. It's like we have a little army, a Tennessee army," she says.

Continuing in another trend in Toronto theatre, led by Ins Choi's Kim's Convenience and Ravi Jain's A Brimful of Asha, two critical and financial successes that speak to a very specific cultural segment of the city's population, TTP hopes to eventually work with local playwrights to create stories based on the neighbourhoods in which they're performed.

"One whole play about Brunswick Avenue, or a particular corner of Trinity Bellwoods, I think that would be way too much fun," says Ms. Johnson. "I would love to see individual neighbourhoods activate their own inner arts and culture scenes and tell their own stories, and I'd love to see more artists getting out there. And I do think we're on our way." 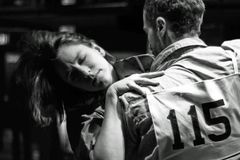