John Tory is right to be skeptical about using a legal sledgehammer on Uber, the car-summoning service.

When city officials announced on Tuesday they were seeking a court injunction against the company, the mayor-elect was quick to issue a statement. "Uber, and services like it, are here to stay," he said. "It is time our regulatory system got in line with evolving consumer demands in the 21st century."

That put it nicely. The city should be encouraging competition and innovation, not suppressing it. Uber and similar services such as Sidecar and Lyft promise to help change the way many people get around cities. By signing up for a smartphone app, users can summon a car with the touch of a screen, monitor its approach and pay automatically and electronically without fumbling for a wallet. Many regular customers find it a quick and easy alternative to calling a cab.

Understandably, this drives some cabbies mad. They have demonstrated against Uber and its like from London to Taiwan. Many of them pay heavy licensing and insurance costs, only to see unlicenced drivers without any of those burdens come along and snatch a share of their business.

Toronto officials say the city has to enforce regulations. Their job, they say, is to make sure consumers are riding in safe, insured and well-maintained cars, and are protected from price gouging or reckless drivers.

They don't buy Uber's dubious argument that it is a mere ride-sharing service. The way they see it, Uber drivers are charging people for rides and should be covered by the same rules as taxi-company drivers. If they aren't, it is the Wild West.

But there should be a way to let Uber and its rivals roam the streets without turning Toronto into Tombstone. Cities around the world are struggling with this issue. Taxi regulators did not anticipate the new technologies that simplify communications and payments, bypassing taxi dispatchers and metered cabs. Confused about how to respond, many city governments in Europe and North America have taken the same route Toronto officials are pursuing and tried to clamp down on the new services.

As Mr. Tory suggests, the effort seems futile. Like Airbnb, the online service that matches travellers with beds, car-summoning services are popular precisely because they connect consumers directly with providers. That can cut costs and hassles. It is the way the world is moving, and moving fast.

Rather than stand in the way, cities should find ways to let these services thrive while protecting consumers and being fair to established providers like cab companies. In California, birthplace of Uber, regulators have brought in rules that permit the car-summoning companies to operate as long as they take steps such as meeting insurance requirements and having background checks for drivers. Officials are still jousting with the companies over how it will work, but it is a start.

It will be a tricky business, no doubt. To suffocate the new services in regulation would be a mistake. Strict standards on car maintenance, equipment and driver training don't make sense for an informal exchange such as this. Competition and the lash of consumer reviews should help keep the new companies from using clunkers or sketchy drivers.

Authorities shouldn't over-regulate pricing, either. The practice of "surge pricing" – hiking the cost of rides at busy times – is a legitimate and promising way to get the supply of cars and drivers to meet the demand from passengers.

We don't want the roads to devolve into a free-for-all, but we don't want to stifle a new, popular and innovative business either. Mr. Tory is right to want to seek that balance.

A look under the hood takes some shine off Uber
Subscriber content
November 19, 2014 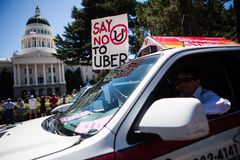 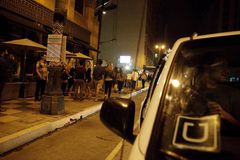