Sitting on a panel with the two other leading candidates for mayor, Doug Ford asserted that he deserved to be elected because he and his brother, Mayor Rob Ford, "have a proven record of getting things done."

Over the past four years, he said with his usual air of bullish confidence, "we ended up getting 98 per cent of our agenda through. You don't get that by fighting with people."

Ninety-eight per cent? This was too much even for Steve Paikin, the calm and fair-minded host of TVO's The Agenda, who was interviewing Mr. Ford and rivals John Tory and Olivia Chow for the panel last Friday.

"I do have to ask about the 98-per-cent figure," he interjected, ever so politely. "How do you come to that?"

"Well, 98 per cent," Mr. Ford replied. He conceded that the Fords had failed to achieve one objective, cancelling the lucrative land-transfer tax, but that was the doing of city council, and sometimes councillors "would rather line the pockets of special interest groups."

Mr. Ford's 98-per-cent figure – sometimes he ups it to 99 per cent, but that's inflation – is just one example of the positive deluge of misleading assertions, fractured facts and outright untruths he has been spouting since joining the race for mayor in place of his ailing brother last month. Fact-checking Doug Ford is like trying to swat away a thundershower with a tennis racket. You just can't keep up.

How he reaches 98 per cent is anyone's guess. As Mr. Paikin tried to point out, the Fords had a winning record in the early going. After that, they started losing votes. Their move to hijack development plans for the Port Lands ended in an embarrassing setback. Their attempt to push through a Sheppard subway without a credible funding plan led to a huge defeat at city council. In many less important votes, the Ford brothers found themselves the only dissenting voices on council. They got nowhere with an election promise to cut the size of city council in half.

Mr. Ford told Mr. Paikin that, under Rob Ford's administration, "every single budget went through with flying colours." In fact, council voted in 2012 to overturn $20-million in cuts favoured by the mayor, a high-profile loss.

Mr. Ford told Mr. Paikin that "we've balanced the books for the first time." In fact, Toronto is required to balance its operating budget every year. The Ford administration managed, to its credit, to end the practice of using previous year's surpluses to plug holes in the budget, but that is not the same.

Mr. Ford told Mr. Paikin: "We turned a bankrupt city into a prosperous city." In fact, although Toronto had some budget struggles under mayor David Miller, Moody's Investors Service gave the city an "Aa1" rating in 2010, months before Rob Ford took office.

Mr. Ford told Mr. Paikin that he would never call Mr. Tory names. "I don't go after him personally," he said. That is the same Mr. Ford who called Mr. Tory a "slick-talking politician" who had everything handed to him on a "silver platter" and took the subway because "his chauffeur was on vacation." Nothing personal.

All this, remember, came in the space of one brief appearance on a broadcast panel. There is much more. In the past few weeks, Mr. Ford has asserted that he and his brother deserve credit for getting underground transit at Eglinton Avenue because of the Crosstown light-rail project (the central portion of the line was always to be tunnelled and the Fords had nothing to do with it); for quarterbacking the Scarborough subway project (the real credit goes to former Toronto Transit Commission chair Karen Stintz and other city councillors); and for creating tens of thousands of jobs (mayors have limited influence over the economic factors that govern job creation).

The Ford administration had some real achievements, from contracting out garbage collection in part of the city to hammering out new contracts with city unions. Those should be enough for Mr. Ford to boast about. 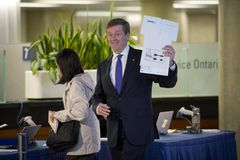 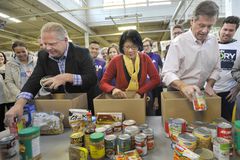 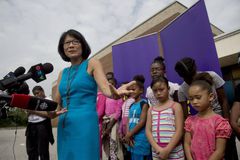 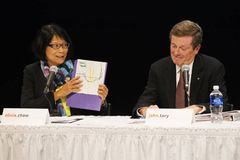 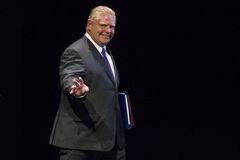