It's supposed to be an urban-planning model - an example of what millions of dollars and decades of prepping, razing and rebuilding can do to transform a 60-year-old poverty enclave into a mixed-income downtown neighbourhood.

But right now, Regent Park is reeling after a string of shootings left three dead in as many weeks. Parents say they are afraid to let their children out after dark, even for the area's free tutoring programs. Police have set up a neighbourhood-specific unit, in which officers conduct around-the-clock patrols that are as much about community engagement as they are about stopping crime.

Regent Park's re-imagining is far from finished, and it will be years before the verdict is in on its success. Right now, residents of the 2,083 social-housing units are in flux - some already in new units, some in old ones waiting for demolition to begin, and others temporary townhouses while construction is in progress.

In the meantime, some argue the fear inspired by the recent violence and uncertainty over how well the renewal will work raise questions about exporting this model to social-housing complexes in the city's most troubled neighbourhoods.

"There's a million questions around Regent Park," said Planning Alliance architect John van Nostrand. To start, "is it the right form of development? … It sounds like it's supposed to be better, but that's what they thought in 1949, too. I'm not sure we understand what's going on there, to begin with."

Instead of tearing everything down and disrupting the lives of thousands of residents, he said, it might have been cheaper and more prudent to work with what was there.

"You're kind of in limbo," he said. "And when you're in a place like that, in limbo, all kinds of problems can start."

Sheila Braidek is more circumspect. The executive director of Regent Park's community health centre has seen the view from her office window change in the past three years from a hole in the ground to a multi-storey condominium tower.

But at the same time, she's seen thousands of lives uprooted.

"It's one thing to build buildings, right? Frankly, that's the easy part of this. … The harder part is, how do you build community? And it's not that we're building a community in a vacuum," she said. "I don't think there's been the level of investment in that piece of the puzzle.

"What are the implications? I guess we'll find out."

On a chilly November evening, nervous parents packed a church basement in a meeting closed to the public to discuss what they could do to make their kids feel safer.

"Before, it was okay," said Salwa Moubachar, whose eldest daughter, Fatima Animer, is in the tutoring program. "Everybody knows everybody. It was a really strong community. But now, it's scary.

"Now, people are moving. Places are empty. You're walking around, you see strange faces."

Ms. Moubachar and her family had the bad luck of moving to accommodate construction just two weeks ago - right into the heart of last month's violence. The mother of five insists she feels less safe, not more so.

Police in the area started noticing an uptick in calls over the past year, but won't say what might be driving it. "Radio calls, for sure," are up, said Constable Joe Jaksa. "For everything."

But October's three homicides were the community's first in a long while. And the shock of that violence pushed the police to set up patrols - on foot and on bicycle - in Regent Park at all times, trying to engage with residents, rather than confront them. For now, it's a 10-week pilot project. But the officers involve say they want to be in this for the long haul.

"See the crime numbers drop and we pull out? No, that's not how we want to play this game," said Constable Ed Otten. "Once we have established a better quality of living for residents, we want to maintain that."

Toronto Community Housing Corporation calls the revitalization project "the most important thing we are doing as a landlord to improve community safety."

"By incorporating crime prevention best practices into the design of the buildings and public areas … and by linking tenants to jobs and training opportunities, we are making an important contribution toward improving community safety," said spokesman Kyle Rooks.

"Nothing in the latest news, or in the old news, or anything, has ever caused me to waver from being very pleased with the site plan and with the quality of the design," he said.

"It's an area that had crime in the past and it's having it currently. But … there'll be a new Regent Park. And it's going to rejoin the city." 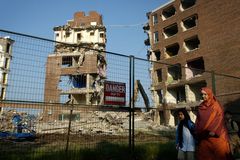