Asked why rich young couples come to his store, Jim Addison shrugs. "They spend all that money to live in a beautiful converted factory; they don't want a hollow door," he says.

Mr. Addison came to own his plumbing and salvage warehouse through a stroke of luck and good timing. But it's no coincidence that it's successful. To the savvy do-it-yourselfer, Addison's Inc., at 41 Wabash Ave., is a treasure chest. And it's not just spring renovations that have got the place hopping.

Newcomers to the neighbourhood hear it's a place where they can find one-of-a-kind replacements for the cheap fixtures and furnishings developers put in their Roncesvalles lofts.

On their first visit, they walk past the cast-iron Hessian soldiers that guard the stairs and explore as though they're at a gallery. Browsing the collection of fixtures, basins, and bathtubs, they stop and gaze at Addison's oddities: the vintage pinball machine; the wax-museum Hominid; the industrial knitting machine with its 200 or so patents from 1920 to 1948 listed on a brass plate.

In the back corner of the first floor, they find the sky-blue marquee of the Canary Restaurant. It's beat up and the neon letters are broken, but it looks about the same as it did in 2007, the year the iconic diner closed.

"About half the people who come in here notice that sign," Mr. Addison says.

The Canary opened at Front and Cherry Streets in the mid-sixties, about the time Mr. Addison immigrated to Canada from Aberdeen, Scotland. A plumber by trade, he opened a business in Leslieville, and when he could, he collected salvage from Toronto's then thriving demolition industry. Period radiators, antique cabinetry, old posters. Anything that interested him.

Over time, the collection became his business. People came to him for one-of-a-kind fixtures to renovate their bathrooms. Television and film studios rented his collection for their sets.

Then, in 1994, he got a surprise phone call from a film executive. Earlier that year, Mr. Addison had rented fixtures to a studio for the Lunenburg, N.S. set of the Stephen King thriller Dolores Claiborne.

The executive was calling to ask how much the beautiful period pieces were worth. "About $25,000," Mr. Addison said.

The studio had had a fire on set and everything was destroyed. They sent him a cheque in the mail.

Mr. Addison used the money to expand. The cheque became the down payment on a run-down warehouse at 41 Wabash Ave., next door to an old abandoned sock factory in grimy Roncesvalles.

The previous owner was also a plumber. But, nearing the end of his life, he was sick and the building – an old three-storey motor factory – had grown increasingly disorganized.

Inside, interesting tools and fixtures were piled haphazardly. Behind the building, trees had grown up through cast-iron radiators. Some were wedged into branches four metres in the air. "The branches grew up through the fins of the radiators and carried them up in the air," Mr. Addison says.

For a collector like Mr. Addison, it was cheap and it was perfect. But, it was a mess.

At the time, so was Roncesvalles.

Employment in the neighbourhood, once richly industrial, was long gone. The many old factories near Addison's were graffiti-covered relics – mostly derelict. There were illegal raves in the boarded-up building across the street. Drug use and prostitution were visible on the corner, even in the middle of the day.

It took Mr. Addison a year to sort through the piles before his new building – his showroom – opened in 1995.

That was also the year Roncesvalles started to change.

Under pressure from neighbourhood residents, the city opened Sorauren Avenue Park across the street from Addison's on the site of an old TTC transit yard. The park wasn't pretty. Its grass struggled to grow in earth that was cheaply laid over the concrete pad of the gigantic garage. But, the neighbourhood schools now had baseball diamonds and soccer fields. Parents had a playground and a place to walk their dogs.

The park took crime off the street corner. "The mothers taking their children out to play scared off the prostitutes and the pimps," Mr. Addison says.

With crime decreasing, young families started to notice the neighbourhood's advantages: the handsome residential streets, the access to the subway, the shops and cafés on nearby Roncesvalles Avenue.

Developers noticed too. They bought up the better-looking factories nearby and converted them into expensive lofts for the growing segment of Roncesvalles families that make over a $100,000 a year.

Some of the conversions are spectacular. Units in the old Rawlings baseball-glove factory go for more than $1-million. Each has a private elevator.

Today, once-gritty Roncesvalles is hip and, 15 years after it opened, so is Addison's.

With wealth, property values are going up and Roncesvalles's industrial heritage is becoming a stylish façade.

In a few years, Addison's is likely to become one of the last unconverted industrial buildings in the neighbourhood.

Sitting behind his gigantic desk, he says he has had offers from developers and his property tax bills keep getting bigger. He's getting older, but he has no intention of selling.

He made the desk himself, out of a granite countertop and two curving radiators. The rads are warm to the touch.

"This is my retirement," Mr. Addison says.

Then some customers come downstairs and he helps them find what they need – solid bronze door pulls – and they head out past a truck loading prison toilets for the set of Nikita. 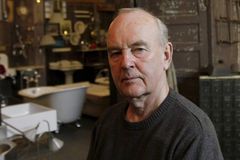