A newly released police document describes Rob Ford inhaling from a glass pipe on video, but the only questions the Toronto mayor was answering Wednesday were from a British food critic about hot dogs as he refused to address the allegations concerning his drug use.

The spectacle that surrounds the leader of Canada's largest city in the midst of a re-election campaign gained momentum with the first official description of the alleged crack video in court documents. The police affidavits describe one minute of tape in which Mr. Ford is "consuming what appears to be a narcotic." The video was taken in the early evening on the Sunday of last year's Family Day long weekend – the same day Mr. Ford did not do his weekly radio show in order to spend "time with loved ones."

In another video recovered by police, a man who officers believe took the footage explains how to secretly record in a way that can "even catch a Mayor smoking crack." The new documents also reveal that investigators suspect some of the frequent phone and in-person contact between Mr. Ford and his friend, Alessandro Lisi, was "indicative to that of drug trafficking." None of the allegations has been tested in court.

The newest revelations in the 10-month litany of allegations, confessions and denials, come as the mayoral race heats up. Mr. Ford's campaign has been stressing what he sees as his record of fiscal responsibility and deflecting questions about his personal behaviour, saying no one is perfect. The new documents provide his rivals more ammunition to argue that the controversy does matter, as police outline more about the alleged criminality of people in his circle and the ongoing investigation into his dealings with them.

Mr. Ford, well known for his love of football, reacted to the news with his head down and elbows up. He barrelled through reporters and broke into a full run on his way from Nathan Phillips Square, where he visited a food truck accompanied by a film crew and food critic, Giles Coren. The mayor waved his guests into his office, a big grin on his face.

"He appears to be enjoying it," said Councillor Peter Milczyn, a former ally, after watching the crush of reporters. "He has no shame."

For months Mr. Ford, who has refused to answer police questions, has challenged them to arrest him. He has suggested the investigation of him and Mr. Lisi – who is facing charges of drug trafficking and extortion related to the alleged video – is motivated in part by his administration's efforts to cut the police budget. Earlier this month, Toronto police handed oversight of the investigation over to the provincial police.

The videos in question were seized during arrests related to Project Traveller, a year-long guns-and-drugs investigation that culminated with dozens of arrests in June. The investigation of Mr. Ford began after reports surfaced in mid-May of a video allegedly depicting the mayor smoking crack cocaine. Talk of the video was picked up in wire taps connected to Project Traveller.

"This is unprecedented in Canadian history. There's probably never been an ITO this lengthy involving somebody who is a minor drug player, Mr. Lisi," Mr. Morris said.

Mr. Morris reiterated his call for police to make the video public, despite the fact that the new documents reveal investigators had offered to show the mayor the video in the fall on the condition he not comment on its contents.

Ontario's Municipal Affairs Minister Linda Jeffrey called the accusations about Mr. Ford's behaviour "troubling," but said the province has no plans to intervene. The province recognized Deputy Mayor Norm Kelly as de facto leader after council voted last year to transfer most of Mr. Ford's powers and staff to him.

John Tory, who is running against Mr. Ford in the October election, said in a statement that the "ongoing saga is distracting our city, and creating a stalemate at city hall. The mayor no longer has the ability to get things done."

Olivia Chow, the former NDP MP who entered the race last week, also issued a statement. "Our city is tired of the distractions and needs a new mayor," it read in part.

The campaign of another rival, David Soknaki, said in a release he is looking to offer "solutions, not distractions."

Mr. Kelly said the police suspicions of drug trafficking "would concern everybody." He said it's up to the mayor to decide how to address the allegations, but he added: "I think one would expect a more fulsome response than has been delivered so far."

That wasn't Mr. Ford's plan Wednesday. "No comment, no comment," he said leaving a committee meeting mid-morning after losing a bid for councillors to forgo their pay increase and casting the lone vote against plans for the city to invest $10-million to help renovate BMO field.

"For the city to have a crack-smoking mayor is the wrong kind of mayor to have," said Councillor Denzil Minnan-Wong, a former Ford ally. "The public will be able to make that decision come October."

With reports from Jill Mahoney and Adrian Morrow 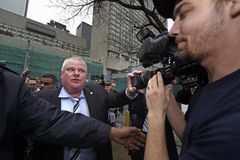 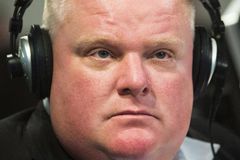 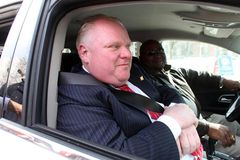 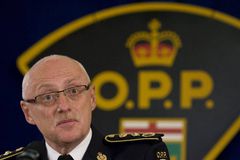 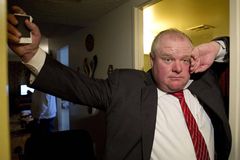 Follow Elizabeth Church, Ann Hui and Renata D’Aliesio on Twitter @lizchurchto @annhui @renatadaliesio
Report an error Editorial code of conduct
Due to technical reasons, we have temporarily removed commenting from our articles. We hope to have this fixed soon. Thank you for your patience. If you are looking to give feedback on our new site, please send it along to feedback@globeandmail.com. If you want to write a letter to the editor, please forward to letters@globeandmail.com.
Comments are closed