Jurors are now deliberating over the fate of two men accused in the shooting death of an innocent bystander as they engaged in a dispute with bouncers outside a Toronto strip club two years ago.

Edward Paredes, 24, and Awet Zekarias, 25, are charged with the second-degree murder of John O'Keefe, 42. Mr. O'Keefe was killed instantly by a bullet to the head in the early hours of Jan. 12, 2008, as he walked along Yonge Street near the Brass Rail tavern.

The court has heard he walked unwittingly into the midst of a sidewalk altercation between the two accused and the bouncers who had just ejected them from the strip club.

Mr. Paredes has admitted to firing the fatal shot but claims he fired in a bid to scare the bouncers and deliberately aimed away from them, and did not see Mr. O'Keefe.

The gunman tried to plead guilty to manslaughter at the outset of a seven-week trial, but the Crown refused the plea and argued Mr. Paredes meant to kill one or more of the bouncers. Prosecutor Hank Goody further argued that Mr. Zekarias repeatedly urged his co-accused to shoot the bouncers, and is therefore equally guilty of second-degree murder.

Court heard the two men went to the Brass Rail with a group of friends to celebrate Mr. Zekarias's birthday, but were ejected for misbehaviour. Once outside, the Crown contends, an enraged Mr. Zekarias exhorted Mr. Paredes to pull out his handgun, which he had legally obtained but illegally carried with him in a waist holster that night, and fire at the bouncers.

Just before he did, court heard, the bouncers jumped clear and the shot hit Mr. O'Keefe instead. 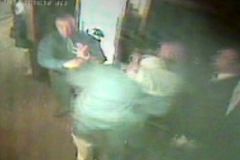