Alongside drawings by her two children and the autographed football she won at the last Grey Cup, there's a new piece of art proudly displayed on the wall of Karen Stintz's second-floor office at City Hall.

Neatly framed, and duly signed by 24 colleagues, it's the petition she engineered that led to last month's special meeting of city council, and the marathon debate over Toronto's incendiary transportation file.

When it was over, council had voted with Ms. Stintz to confirm support for the light-rapid version of the city's transit future, and to reject the maximal, subways-only position staked out by the people who appointed her chair of the TTC – Mayor Rob Ford and his closest ally, older brother Doug.

Though Ms. Stintz, 41, is too much the politician to admit it, the document constituted a defining moment in the three-term career of the Ward 16 councillor.

If she one day chooses to stake her own claim to the mayor's office, the moment may well be seen in hindsight as the seminal event marking her declaration of political autonomy.

It may also prove to have been historic, redefining the relationship between the sprawling 44-member council and the mayor's office.

But as aftershocks of her mutiny continue to reverberate through corridors, Ms. Stintz is quick to deploy a fence-mending kit.

"Rob Ford ran for mayor and he won," she says, sitting stiffly in her office. "As difficult as these issues have been, I still fully respect the Office of the Mayor."

The showdown, she insists, was not about transit, but about money – and her bedrock fiscal conservatism. "If you only have $8.4-billion, you need to make sure it's invested in the most effective way," she says. "If you spend it where you don't need to spend it, and simultaneously deprive other areas of transit, you're not making good decisions. But I think it will be a lot smoother moving forward. That part, I'm looking forward to."

If Les Frères Ford assumed Ms. Stintz would be their obedient servant at the helm of the TTC, they clearly misread her.

A short review of Karen Ruth Stintz's personal story would have told them she is made of sterner stuff, having confronted and weathered a series of private adversities.

While still a toddler, she watched her parents' marriage unravel and end in divorce. Later, she saw her mother institutionalized for schizophrenia – an event that forced the teenage Ms. Stintz, an only child, to learn both resourcefulness and independence.

In marriage, she and her husband, software executive Darryl Parisien, have had to cope with the loss of twins in utero. Their two children, Jackson, 8, and Hailey, 5, are adoptees.

Similarly, the clear object lesson of her political career is that it's a mistake to dismiss her as a lightweight. When she sought office for the first time in 2003 – responding to a neighbourhood newspaper advertisement for candidates – she was a complete novice, a civil servant in Ontario's Ministry of Health. Running against a seemingly unbeatable incumbent, Anne Johnson, a 31-year veteran of council, Ms. Stintz won the Eglinton-Lawrence seat handily, by 2,300 votes. She's won twice since, each time with larger pluralities.

With the high-profile TTC file now consuming 90 per cent of her time, Ms. Stintz and her husband have worked hard to strike an equitable division of domestic responsibilities, to help balance the often competing demands of family and career.

He handles the weekly grocery outing, cooks dinner, makes lunches and walks the kids to school. Ms. Stintz "negotiates" dinner – "with kids, eating and cooking are separate processes," she jokes – and walks the dog, Oscar, a standard poodle (and the household alarm clock), every morning (for 45 minutes) and evening.

A one-time marathon runner, she says this is now the only serious exercise she gets. It's been replaced with a more sedentary pursuit – the piano. She just completed her Royal Conservatory Grade 4 exams. The couple splits oversight of homework assignments for Jackson.

"Work is work and it stays here and home is home," she says. "It's busy enough."

Ms. Stintz's 82-year-old father, Henry, a former NASA engineer who worked on the Canadarm, lives with them in their Lawrence Park home. Her mother resides in a long-term-care facility in Don Mills.

Weekends are devoted to family and she tends to choose appearances at public events that are accessible to children.

"They come with me to lots of places. The kids are the great equalizers," she laughs. "They're the ones who tell me to turn off the BlackBerry. I try not to look at it until they're down for the night."

The last family vacation, ironically enough, was to Cuba – Veradero Beach, with a side trip to Havana. "I guess if anyone thinks I've become a lefty, now it's all confirmed," she laughs. " 'She attended the eight-hour speech by Fidel.' Viva Fidel!"

In the midst of her conflict with Mayor Ford, Ms. Stintz received a card from her mother. Heroes, it said, are not the people who brandish flags. Heroes are the people who drag themselves out of bed and try to solve problems. "I think there are amazing heroes in this building – [councillors]Joe Mihevc, John Parker, many others. City hall is not dysfunctional."

"The better I get to know Karen, the clearer it is to me that her first priority is her family," says councillor John Parker. "At city hall, her approach is to first assemble the facts and then do what she thinks is right. If she can bring people together, she will. If she has to do battle, she'll do battle and won't back down."

What Ms. Stintz says she has learned from her encounter with the Ford brothers is that Toronto is still wrestling with the implicit conflict between a mayor with enhanced powers and the presumed supremacy of council. "It's like Henry II and [Thomas]Becket," she says. "Should loyalty be owed to an executive and did I breach it by holding the special meeting? Or is council supreme and the objective is to build consensus and make sure issues get a full hearing? These issues are not easy."

Some city hall observers have interpreted the recent skirmish as signs that Mayor Ford is beatable and that Ms. Stintz might harbour ambitions to inflict the beating. Others close to her say the psychological toll of battle has been so heavy that she may leave the political arena entirely.

She herself insists she has held no discussions about running for mayor. "No. No. None. I was reluctant to be interviewed, because I want to keep my nose to the ground and get back to work on the issues, get customer improvements done, get shovels in the ground. That's what people care about."

The mayor, she predicts, "will run again and will be successful, if he focuses back on his fiscal mandate. There's still an opportunity to carve that path. He's got more than two years."

"I don't think a future mayoralty campaign is what's driving Karen," says councillor Peter Milczyn, who lost his challenge for the TTC commissioner's job this week. "I think there was genuine frustration with how the transit file was being handled."

Councillor Parker agrees. "I don't think she has ambitions in that direction," he says, "although there are people who would like her to."

What remains unclear is whether the rift with the mayor can be breached in the months ahead. One veteran observer of municipal politics says her actions may leave Ms. Stintz in an unenviable position. "As Bob Rae was as premier of Ontario, she may be alienated from the right for opposing underground subways, and anathema to the left for supporting the rest of the Ford agenda."

In the meantime, says Joe Mihevc, the left-wing councillor who helped forge the consensus in favour of light rapid transit, the great transit battle has "liberated Karen from her own thoughts. And given how the mayor and his brother have treated her – not as a colleague who disagrees, but as an enemy with whom to war – it's driven her to autonomy." 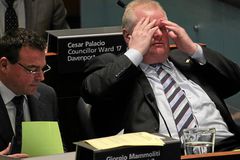 Mayor loses as TTC board restructured
May 3, 2018 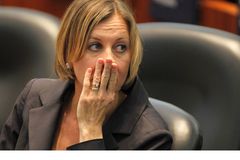