Kenneth Montague may be the city's only art collector/curator/dentist. The 48-year-old directs Wedge Curatorial Projects – a non-profit that promotes themes of culture and representation, particularly his own African-Canadian, or "Ja-fake-an," identity. At the Interior Design Show, he presents Offsite/Onsite: Stephen Burks: Man Made Toronto Ad Hoc; January 26 – 29, $19-$22; Metro Toronto Convention Centre, North Lobby.

How did you come to collaborate on this show with Stephen Burks?

I bought one of his TaTu tables from a store in Toronto, Quasi Modo. It's this beautiful wire table and it made me want to find out more about the guy who made it. So I Googled him. He's a young black designer who's kind of doing what I'm doing with Wedge Curatorial Projects, which is exploring our African identity. So there was synergy. He grew up in Chicago and I grew up near Detroit. So we both grew up with Ted Nugent and Bob Marley. We're hybrids. We were both the only black guy at the Neil Young concert, if you know what I mean.

So did you just call him up?

I ran into him at [contemporary art fair]The Armory Show in New York, two or three years ago. We had an immediate connection. And he came to Toronto to give a talk and I had a dinner for him, co-hosted with Azure magazine at Osteria.

He has a cultural imperative as well, but he sells his designs as furniture.

None of his new stuff is at market yet, but yes, with the basket-weaving pieces, he's in talks with major manufacturers right now.

So where is the line between incorporating and celebrating a culture in home décor, and co-opting it? As a white girl, would it be weird if I had a piece of his furniture in my house?

Not for me, not for Stephen. There is something special about a black designer and black curator putting together a show that celebrates Africa – we do have more of a stake in it than people who are outside the culture. But both Stephen and I strongly believe in inclusivity as a concept. You want to show people how you've been influenced by your own culture, but then they can put it through their own filter. It's not by us, for us.

As a major collector, your mission has to been to showcase African art and culture. Do you feel like you've been successful?

I think so. Just in the last year in particular. In the art world, it's now Africans who are creating and showcasing this art, rather than a European going to the African continent and taking a picture or something. So I do think there's a movement and the art market is treating it as such.

Do you feel support within the Toronto art community?

Yes and no. Definitely I felt like an island for many years, funding things from my own income, and not able to get grants. But suddenly Wedge has become a not-for-profit and we have a charitable number and there are people interested in giving us funding – Toronto Arts Council for this show in particular. So people are taking an interest in what I'm doing. It's not so fringey any more.

It's not a well-known centre for black culture. But coming here was important because it's a place that celebrates diversity as a guiding principle. So it influences how you think about things. It made me a far more inclusive person. There's no one way to be African-Canadian, and I've learned that the way forward is to celebrate multiple stories of how people are. That inclusiveness is something I wear on my sleeve and that makes me stand out in the art world. It's very Toronto.

Are there young African-Canadian artists you're into these days?

Oh yeah. In particular: Megan Morgan, Christina Leslie, Dawit Petros, Stacey Tyrell, Sandra Brewster, the list goes on. These are all artists who are mostly in their 20s and 30s, who are taking stories out of their own lives, often about immigration and coming to Canada, and putting it through their second- or third-generation filter. I bought Christina Leslie's work – 14 beautiful photographic prints – off the wall at the OCAD student show five or six years ago. Loved it, bought all of it.

What excites you right now about the Toronto art scene?

I opened up my home as a gallery space in 1997 when I lived in a loft near Susan Hobbs Gallery at Queen and Bathurst. Before CB2 was there! And I've been waiting and hoping for other collectors to start sharing their work with the public. I see this in Miami and Germany and all over the world, and I'm seeing it recently here in Toronto. Samara Walbohm from Type Books and her husband Joe Shlesinger are doing this great space. And, in terms of artists themselves, there's less of a tendency to compare ourselves to New York, to London.

I think so. I'm seeing it more in the contemporary spaces near Bloor and Lansdowne, like Mercer Union, and little galleries on Dundas. The recession's been good for the local art scene in that people are less afraid to take the risk on spaces and concepts that they might not have considered viable in a more expensive past.

What's holding the scene back?

We need more people in the mix. Certainly in the African-Canadian community, we need more curators, more collectors, more people who control the art production in some way. We need more writers and academics. I'm not saying we don't need more artists, but there's a lot of young black artists and I encourage them to read more, think about writing about it as well, or being a gallery owner. And I tell the business people that I know, "Buy this stuff."

You recently moved your collection to your new condo at Roncesvalles and Howard Park. Are people surprised by where you live? To borrow your term, there's not a lot of 'Ja-fake-ans' in the neighbourhood.

There's not! I like neighbourhoods with stories. My dental office is at Bathurst and Bloor. It used to be very Jewish, very European, then it became very Caribbean, and now it's very Korean. It just keeps moving. I feel like that's happening in my neighbourhood, too. It was very Polish and Ukranian and now the cool kids have taken over places like The Inter Steer, hanging out there with the old Polish gentlemen. I love that. I like living in the unpredictable spot. I'm in my 40s, I'm a dentist, so people think I'll live in Yorkville or the Annex. But I really like living on the frontier. Maybe one day when it all catches up, I'll move to Caledon.

What galleries do you visit most often?

I'm very impressed by some of the smaller commercial galleries where you can take time and talk to the owner. Clint Roenisch has been extremely influential on me. He's got this high-brow/low-brow thing that he puts together in a really considered, intelligent way. Camilla Singh, who's an independent curator who has a show at MOCCA right now. Stephen Bulger is a treasure trove of great work that often has a real social message.

Do you think you'll ever stop being a dentist and focus on art full time?

I don't know. I enjoy it. I love being Dr. Kenneth Montague. And the office has attracted a lot of cultural figures: Nelly Furtado, the guys from Broken Social Scene. So it's fun.

Who has the best teeth?

I didn't ask you who had the worst.

That's true. I'm going to have to think about it. 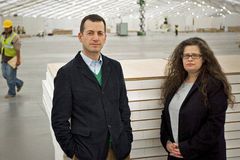