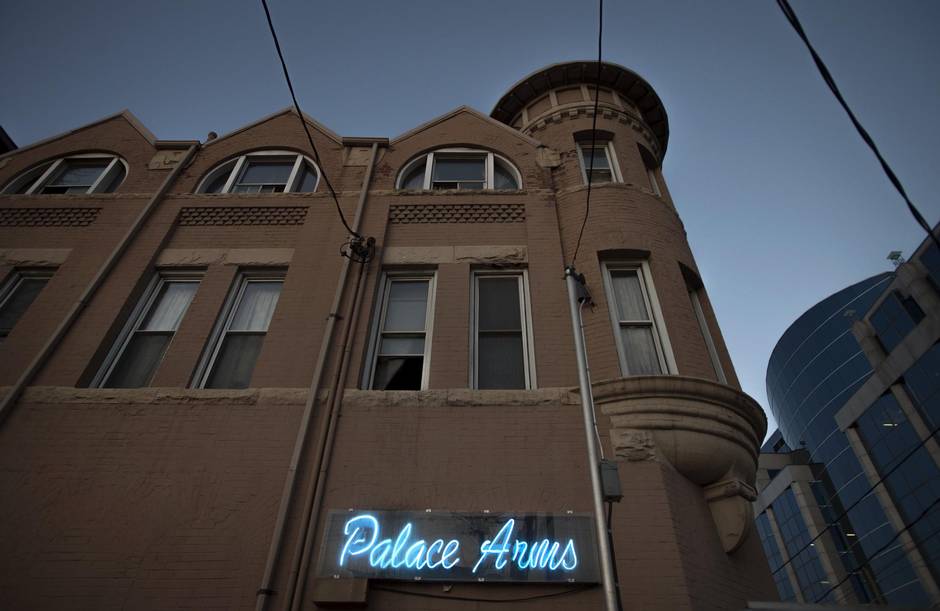 (Photos by Darren Calabrese for The Globe and Mail)

The building on a coveted King West intersection is one of the last of its kind: an affordable refuge for poor men. Now it’s up for sale. As developers begin to circle, Arthur White examines what the future holds for the hotel and its tenants

For sale: A derelict long-stay hotel at the corner of King and Strachan, its interior design scheme centred around stucco, ceramic tile and wood panelling. In Room 8, where I’ve booked myself for six nights, there’s a carpet stained with splotches of white and black, a sheet peppered with cigarette burns and two pictures of the Last Supper – one in 3-D. It’s one of the better rooms.

The price: $14-million. The Palace Arms went up for sale last spring, when owner Bernie Tishman decided he’d had enough of the hotel game. 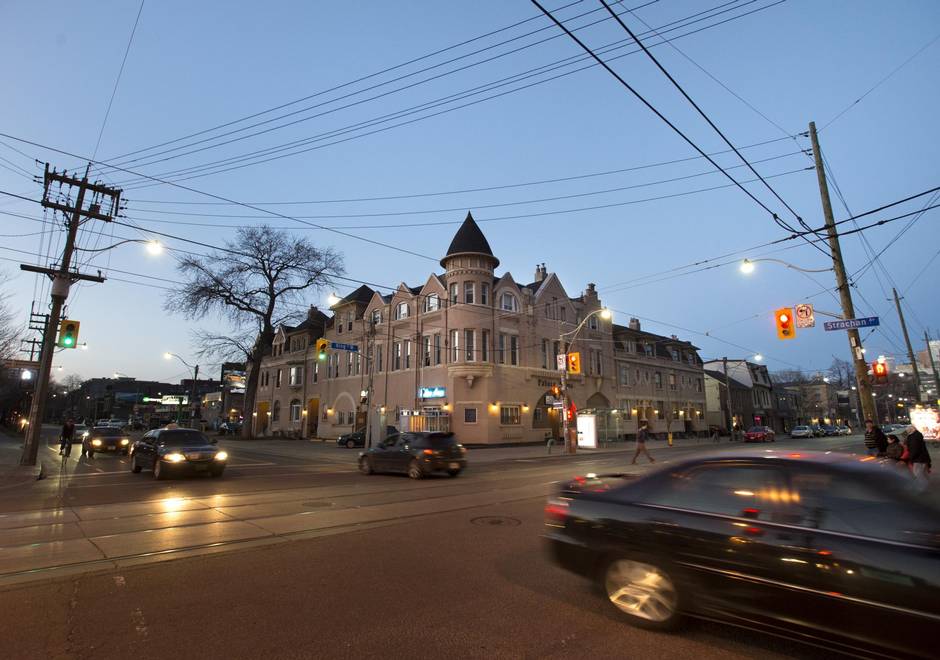 If the market is any guide, it’s only a matter of time before a new project arrives to energize this sleepy strip of King West. The 125-year-old heritage building sits on one of the last underused sites in an area coveted by condo developers (some of whom have already met with city officials to pitch preliminary ideas). With the city aiming to conserve most of the structure in any sale and redevelopment, this Cinderella of Toronto’s Victorian period might be safe – but things aren’t so clear for the tenants, who say they don’t have anywhere else to go.

The Palace has 91 rooms, and the manager says they’re always about 90 per cent full. The mostly middle-aged men who live here scrape by with rough jobs or disability benefits. More than a few are mentally ill. Many are alcoholics.

“The accommodations are basically for men only,” say the rules, but young women are a common sight, strolling along the hallways, knocking on doors. One calls me “sunshine” and asks if I want to party.

Toronto used to have a wide selection of cheap long-stay hotels. But many, like the Gladstone and the Drake, have since been transformed from dilapidated flophouses into swanky neighbourhood hubs.

Riverside’s New Broadview Hotel, once the home of Jilly’s strip club, looks set to follow. As it stands, the Palace Arms is one of the last of its kind: a refuge for poor men seeking privacy and affordable downtown living.

Weekly rates are $195, with heat, cable television and weekly maid service included. With rent controls protecting existing tenants, seniority is key. One man, who keeps the exact figure secret to avoid jealousy, says he pays well under the standard $700 monthly rate. He’s been at the Palace for 21 years.

Adam Murray, 40, moved in four years ago. He used to be a banker, he says, then a crack addict.

Now clean, he does odd jobs around the building. A portrait of Elvis Presley overlooks the heaps of food packaging that litter his tiny room.

Mr. Murray’s main source of income is his $656 welfare check; he makes up the difference in rent by collecting bottles and saving up tax refunds. For him, it’s worth the trouble: The other options in his price range don’t offer the privacy he finds here.

“You think I want to live in a rooming house with a bunch of crackheads?” he asks.

Mr. Murray doesn’t know what he’ll do if the place sells. He says he’d have to talk to his welfare worker, but isn’t confident she’d be able to find him suitable housing.

“Nobody cares where we go,” he says. “I would have to live on the street. I’m not going to move into a place where I would get assaulted or murdered or who knows what.”

The Palace has been around, in some form, since 1871. In 1890, Mary Ann White upgraded from the wood-framed inn her late husband George built to the playful Romanesque Revival structure that still stands today. Two wings were added in 1897. Blue-collar workers from factories to the southwest – since converted into lofts and office space – used to stop by the in-house tavern. But now the Palace seems out of place, the peeling, pale-pink paint clashing against the modern glass and steel skyline of Liberty Village. 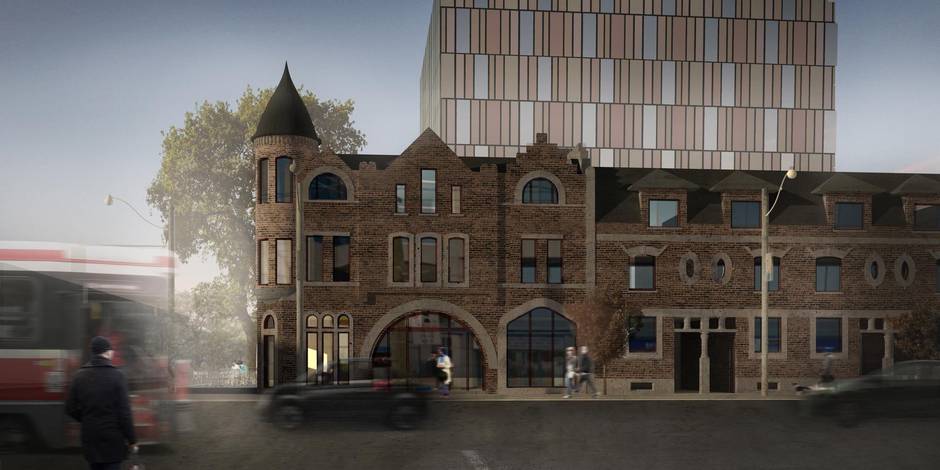 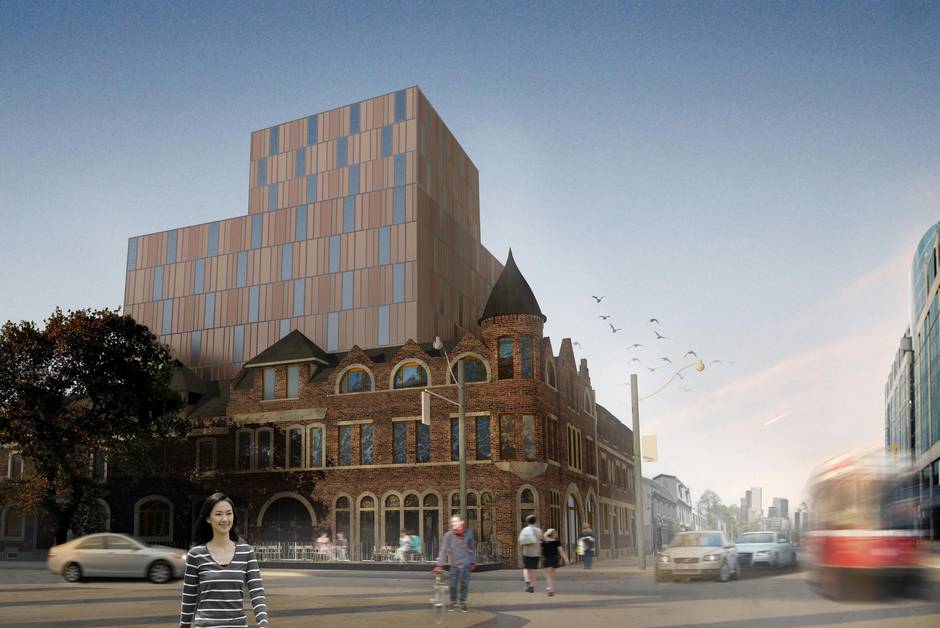 “It isn’t an A-list building,” says architect Tom Bessai. His firm, Denegri Bessai Studio, prepared a feasibility study for a local construction company interested in renovating the Palace. Despite all the “architectural offences” committed against it, Mr. Bessai still sees potential, even “a kind of nobility.” With its pointed turret, rounded arches and Dutch-style stepped gable, the castle-like building is a hodgepodge of forms. Through cycles of renovation and neglect, it has blended layers of Toronto’s history. He calls it “a bit of a mutt.”

Mr. Bessai’s plan would see a mid-sized condo rise from what’s now a parking lot in the back, peering over a remodelled boutique hotel with at-grade retail. He met with city officials to discuss the plan, but it so far hasn’t moved beyond the initial stages. The construction company that commissioned him is too small to purchase the Palace itself, and is waiting for a bigger developer to lead the project.

City Hall says developers have repeatedly inquired about the property, which is listed on Toronto’s heritage preservation inventory. Mary MacDonald, acting manager of Heritage Preservation Services, says her office will insist that a rebuild incorporate more than just the facade.

“We’re now seeking a higher standard of conservation,” she says, namely, “that the presence of the building be strongly felt.”

City officials will not disclose which developers have come by to pitch their ideas, and Mr. Tishman is keeping his prospective buyers a secret. But CBRE Canada, a commercial real-estate company, confirmed that they were involved in early discussions about the Palace. 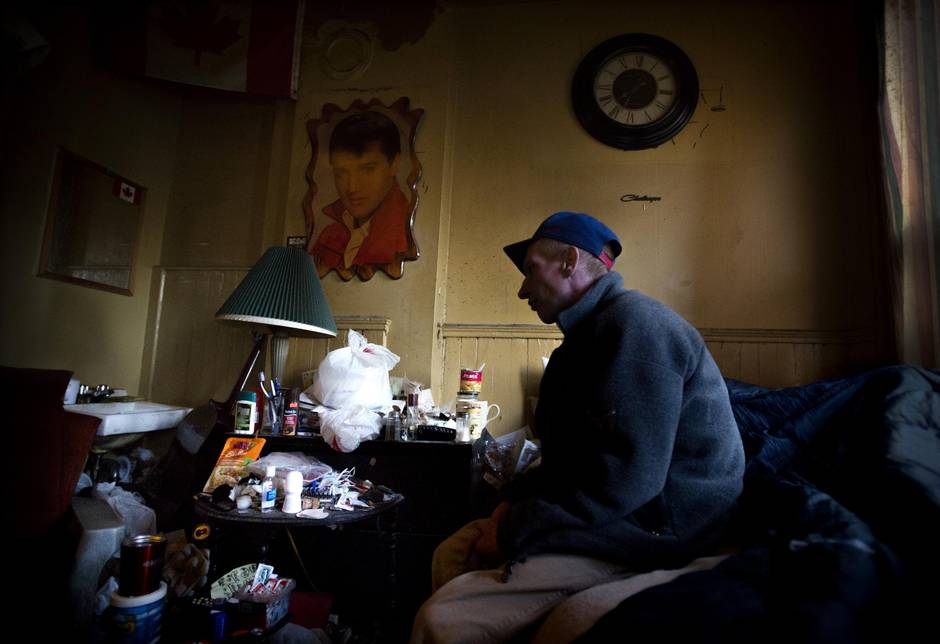 Christopher Bibby, a Toronto real-estate agent, thinks a smart redesign on the model of the Gladstone could enliven the whole community.

“King West doesn’t have the vibrancy that Queen West has when you look between Bathurst and Dufferin,” he says. “So if there were a Gladstone or a Drake it would improve the situation, and I think residents would welcome it with open arms.”

Mr. Bibby predicts that the Palace will eventually sell. A tight market is pushing property values in the right direction.

“It’s a high-demand area,” he says. “We’re running out of quality sites. You just look along King Street West. Where are you going to build?”

Two days before I leave the Palace, a floor mate invites me into his room, crammed full of religious figurines and stacks of newspaper. Wearing nothing but a pair of tight black underwear, he pours me a glass of homemade eggnog. He loves to cook, but stoves and hotplates are against the rules here. (Many tenants boil water in the hallways – the current is stronger there than in the rooms.) He complains about the price of stamps, the syringe he says he found in the washroom and his struggle to find a decent place in Toronto. So far, he’s only found damp or filthy basement apartments.

Brian Paul, manager of the housing program at WoodGreen Community Services, has worked with long-term hotel tenants like my floor mate before. After Streetcar Developments bought the New Broadview Hotel on Queen Street East, they partnered with WoodGreen and the city to rehouse the tenants. WoodGreen’s housing workers used a city rent supplement to win over landlords, while Streetcar paid for moving costs and deposits. Today, 19 of the 21 tenants who entered the program remain housed.

“We see this as a model we can use in other cases,” says Mr. Paul. For the Palace, the trick will be finding a developer willing to participate.

That might help the current tenants, but it does nothing to slow the gap opening up at the bottom of the city’s rental market. The Toronto Municipal Code provides conditions for the conversion of rental units and allows the city to require their replacement. But because rooms at the Palace Arms lack kitchen facilities, they don’t qualify as “rental units” under Chapter 667 of the code. With no obligation to make up for the loss of yet another long-stay hotel, a redevelopment would wipe out these 91 low-rent rooms for good. 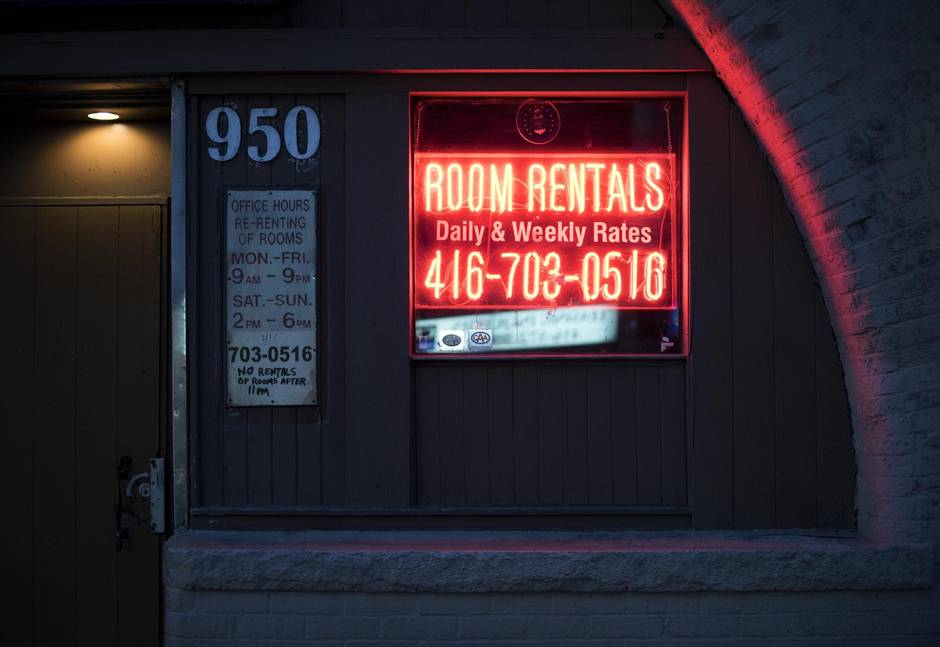 Despite the stains, the faulty current and the kitschy decor, most of the men I spoke to are thankful that the Palace is still around. Otherwise, one said, he’d be sleeping in his truck.

As my floor mate with the eggnog puts it: “Heat, cable TV and a maid who comes to clean – this place is the best for being cheap.”