One sunny morning this week, I went for a walk in David Balfour Park near Yonge and St. Clair. Spreading across the roof of a reservoir, it used to be a well-tended expanse of green. Now, like many parks and other grassy spaces, it has a scruffy, neglected look.

The reason is simple. Toronto restricted the use of lawn chemicals in 2004. The government of Ontario followed with a complete ban on cosmetic pesticides in 2009. As a result, Toronto's public spaces are quite literally going to seed. If you looked around any park, field or boulevard this week, you could see legions of dandelion stalks topped by puffs of white seed.

The city's parks department confirms what any eye can see: Since the chemicals ban, "there has been a marked increase in weeds, especially dandelions, in both public and private properties."

Instead of spraying with pesticides, the city now cuts the grass more often: every five business days on average instead of every seven to 10. The aim is to "dead head" the weeds before they start spreading their seeds (although if the state of David Balfour is any indication, the mowers often come too late). The city has also raised its mower blades to increase the cutting height to three inches. That is supposed to ease the stress on the grass and help it fight back against invading weeds.

Lawn-care experts say it isn't working. Kyle Tobin of LawnSavers Plant Health Care says that after a wet spring and dry summer last year, "this is the worst season I've ever seen for grubs and weeds, and I've been in the business 22 years." Homeowners can control weeds with a concerted program of fertilizing, over-seeding and aerating the grass, but, with 1,500 parks and 4,300 hectares of maintained turf to tend, the city doesn't have the money for anything that ambitious, except on some experimental patches.

So the weeds are moving in – not just the almighty dandelion, but thistle, plantain, clover, black medic, spurge, knotweed and crabgrass, without even mentioning the poison ivy and toxic giant hogweed you find in Toronto ravines.

The grass is losing. Already, says Mr. Tobin, the turf in many parks is unsalvageable – so crowded with weeds that the grass will never grow fast enough to become dominant again. The lawns in some parks are "literally destroyed," he says. "They are mowing weeds."

Many would say: Fine, a few dandelions are a small price to pay for the health of children who play in the parks and roll on the lawns. The problem is that there is no proof that the banned weed killers harm anyone's health.

In a review of the latest scientific evidence in 2008, Health Canada's Pest Management Regulatory Agency determined that the most popular weed killer, 2,4-D, "meets Canada's strict health and safety standards, and as such can continue to be sold and used in Canada."

Only this week, a special committee of British Columbia legislators concluded that there was no reason to question Health Canada's judgment and impose a lawn-chemical ban like Ontario's. "The committee concluded that despite the intensity of arguments in favour of a ban on the cosmetic use of pesticides and a general misunderstanding of the risks associated with chemicals, there is insufficient scientific evidence to support a province-wide ban on pesticides for cosmetic use," it said in an exhaustive 118-page report.

The ban on lawn chemicals was a triumph of fuzzy-headed environmentalism. Since the town of Hudson, Que., became the first jurisdiction to enact an anti-pesticide bylaw in 1991, scores of municipalities and seven provinces have banned them. You can spray pesticides on the food crops we eat, but not the grass we walk on. You can use certain insecticides to kill cockroaches in your house, but not grubs in your grass.

The whole idea of a neat, green lawn has come under attack. Many see manicured stretches of grass as a crime against the planet, gobbling fertilizer and crowding out nature's diversity. "Having a monoculture of turf or anything is never good," says Richard Ubbens, Toronto's director of parks. "We are in a period of transition from the expectation of perfectly manicured, weed-free landscapes and the acceptance of weeds as natural presence in our urban landscape." Dandelions, he insists, help relieve soil compaction and increase biodiversity, "providing organic edible greens for both people and wildlife."

But healthy grass has its role. It filters rainfall, controls erosion and cleans the air. LawnSavers' Mr. Tobin says the average household lawn produces more oxygen than a maple tree. Grass looks nice, too. What a shame we're letting it succumb to the weeds.

Residential pesticides should be restricted, not banned, in B.C.: committee
May 17, 2012 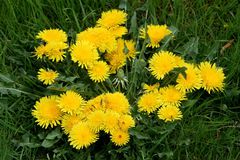 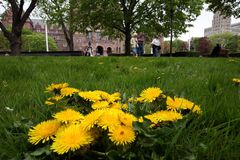 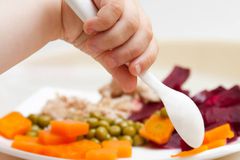 Giant weed that can cause blindness popping up in Ontario, B.C.
July 9, 2010 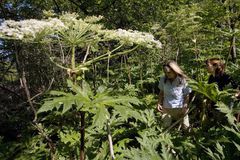 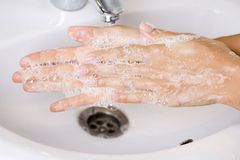