The country's largest school board needs to knuckle down and come up with a plan for closing schools to save money.

That was the message from Education Minister Liz Sandals after the Toronto District School Board released a list that showed one in five schools in the city is operating well below capacity. She said it costs the province a billion dollars a year to keep underused schools open.

"They need to do a better job of reviewing their accommodation and using their resources more wisely," Ms. Sandals told reporters at Queen's Park Thursday. "We want to put our resources into funding programs, not empty space."

The TDSB report, tabled at Wednesday night's board meeting, found that 84 elementary schools and 46 secondary schools are less than 65 per cent full.

The Liberals have put pressure on the TDSB to sell off surplus properties in order to pay for repairs and capital investments in other schools. A report by education consultant Margaret Wilson earlier this month criticized the TDSB for not properly managing its capital assets. Ms. Sandals has given the board until the middle of next month to make changes.

But some trustees balked at the notion of closing any schools, and said Ms. Sandals should do it herself.

The Minister countered that it is the job of the trustees, not her, to figure out what to close.

Ms. Sandals said she is expecting the TDSB to give her a three-year capital plan that will address these matters in detail by February 13. The list the board released Wednesday is not enough, she said, adding that just because a school made the list, that doesn't necessarily mean it should be shut down.

Trustees are reluctant to order schools closed, in part because it is politically unpopular. They also argue that changes in demographics and populations could mean currently underused schools see rises in enrolment in future.

NDP education critic Peter Tabuns said underused schools should be used to house other government programs, not sold off for cash, so that they will be available in case they are needed again in future.

"You don't close down a road because it currently isn't busy. You need to have schools if you're going to have healthy, growing cities. You have to understand that enrollment will go up and go down," he said. "The city of Toronto's population is going to grow by half a million people in the next 15 years. If we lose all the schools now, if we lose a big chunk of those schools now, those kids 15 years from now will be orbiting in school buses around the city without a school to touch down on."

Progressive Conservative Garfield Dunlop said things have only become this bad because the Liberals have been lackadaisical about closing underused schools over the last decade.

"The reality is the province of Ontario...knew for a long time there were schools that should be closed because of declining enrollment," he said in an interview. "Over the last 10 years they've had all kinds of opportunities…they've had lots of chances in the past and now it's the strong arm tactic trying to make the board make that decision quickly."

"Rather than spending a billion dollars on supporting empty space…what we really want to do is spend money on good programs for kids who actually exist," she said. 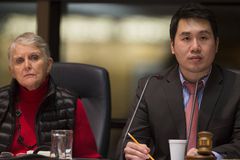 The full list of TDSB schools at 65 per cent or less capacity
January 28, 2015
Parents back TDSB trustees at special public meeting
January 26, 2015