The man accused of threatening Toronto Mayor Rob Ford this week made a brief court appearance Thursday before he was returned to custody.

A visibly agitated Scott MacIntyre said "that is fine by me" after he was ordered not to have any contact with Mr. Ford or his immediate family.

Mr. MacIntyre will remain in jail at least until his next court appearance on Jan. 26.

The incident was the fourth time in three months that police were called to Mr. Ford's home after his family's private issues erupted before public eyes.

A neighbour called police to the home of the mayor after spotting a suspicious vehicle outside on Wednesay. But Mr. Ford was no stranger to the man who was allegedly trying to force his way in, Mr. MacIntyre, a 45-year-old convicted drug dealer.

Mr. MacIntyre, who has served several stints in prison has had a volatile relationship with Ms. Ford that has been the focus of police investigations and placed the Ford family under scrutiny.

Speaking to the media, the mayor of Canada's largest city offered few details about the encounter, other than to say he had an "unwelcome visitor" who "took off" when he told him to leave. Police arrested Mr. MacIntyre several hours later in Mississauga and charged him with two counts of uttering death threats, as well as one count each of forcible entry, possession of heroin and possession of cocaine.

Reached by phone, Mr. Ford's sister declined to discuss what happened except to say that Mr. MacIntyre had been arrested. "I'm in no shape to talk right now," she said.

In an online résumé, Mr. MacIntyre lists his address as a home on Trehorne Dr., the same home where Ms. Ford lives and a short walk from the mayor's Etobicoke bungalow. Mr. MacIntyre also lists Ms. Ford as one of his references for a company called Anything Goes Ltd., and that he works for the company as a shipper/receiver and has "vast knowledge" of the freight industry.

The police, however, know Mr. MacIntyre for transporting other sorts of goods.

In 1992, he pleaded guilty in the United Kingdom to trafficking cocaine. He served two years in an English jail, before being transferred back to Canada as part of a prisoner exchange program. It wasn't long before he was back in front of a judge again, and in 1999, he pleaded guilty after a police sting uncovered his role in a plot to traffic more than 50 pounds of hashish.

Before sentencing Mr. MacIntyre to four and half years in prison, Mr. Justice Casey Hill said: "He is capable of being a useful member of society, if he can give up the idea of quick profit and the greed that appears to motivate those involved in this type of immense narcotic operation."

But he found himself back in police custody in 2005 after Kathy Ford was shot in the face at her parents' home in Etobicoke – the same home where the mayor hosts his annual summer barbecue. She was rushed to hospital, and Mr. MacIntyre and another man, Michael Patania, were arrested shortly after, and charged with a variety of gun offences, as well as the theft of Ms. Ford's mother's Jaguar. All of the charges against Mr. MacIntyre were later withdrawn by the Crown's office, and Mr. Patania was convicted of possession of a handgun.

At time of the shooting, Rob Ford was a city councillor and declined to discuss the incident. During the 2010 mayoral race, he opened up about his sister's troubles in an interview with the Toronto Star, and said she struggled with substance abuse. (In the same interview, he also broached another highly-publicized incident from 1998, when another ex-boyfriend of his sister shot her new lover in the head with a sawed-off shotgun, killing him. "Our family has been through everything – from murder to drugs to being successful in business," he said at the time.)

But only three years after Ms. Ford was shot in her parents' home, she was back with Mr. MacIntyre – and back in trouble. In 2008, the couple was arrested in Vaughan and accused of stealing licence plates, as well as possessing stolen baby formula, razor blades, and tools for the purpose of executing break-ins. Again, all charges against Mr. MacIntyre were withdrawn, and Ms. Ford pleaded guilty to stealing the licence plates and possessing the stolen baby formula. She was sentenced to 15 days in jail.

Mr. MacIntyre's arrest comes only two weeks after police were dispatched to the mayor's house on Christmas Day for what some media outlets have described as a domestic dispute. In late October, Mr. Ford placed another highly-publicized 911 call, when comedian Mary Walsh approached him in his driveway for a mock media interview for a segment on her show, This Hour Has 22 Minutes. Another 911 call from the mayor's home was placed more than 12 hours after his encounter with Ms. Walsh, a police source said.

On Wednesday morning, before it was revealed publicly that the alleged intruder was well-known to Mr. Ford, his councillor brother Doug Ford raised the idea of outfitting the mayor with a security detail. Two other men have already been charged with making death threats against the mayor, whose hard-line stance on spending, and outspoken views on everything from cyclists to HIV infection, has polarized voters.

But the mayor told reporters such protection was unnecessary.

With files from Tim Appleby and Carys Mills 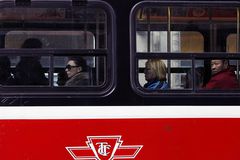 Rob Ford's latest cutback: He's going on a diet
January 11, 2012
Ford not the ‘radical conservative’ opponents make him out to be
January 9, 2012
Follow Greg McArthur and Patrick White,  on Twitter @McarthurGreg @Nut_Graf
Report an error Editorial code of conduct
Due to technical reasons, we have temporarily removed commenting from our articles. We hope to have this fixed soon. Thank you for your patience. If you are looking to give feedback on our new site, please send it along to feedback@globeandmail.com. If you want to write a letter to the editor, please forward to letters@globeandmail.com.
Comments are closed