Turning a page in what a forensic psychiatrist called one of the worst domestic abuse cases he has ever seen, a young man who murdered his tyrannical father in a Toronto public library by shooting him in the back with a crossbow and smashing his skull with a hammer has been sentenced to life imprisonment.

Looking older than his 26 years as he sat in the prisoner's box, Zhou (Peter) Fang was handed the automatic life term on Tuesday by Mr. Justice John McMahon, who adopted a joint-sentencing submission by prosecution and defence and set parole eligibility at 10 years – the minimum for a second-degree murder conviction.

"This killing can only be described as brutal and savage," the judge said. At the same time, he added, the mitigating factors were substantial.

Clad in an orange jailhouse jumpsuit and chewing his nails nervously, Mr. Fang nodded vigorously as the judge outlined the years of abuse he and his mother, Nora Fang, had sustained during his parents' long, unhappy marriage.

As the proceedings ended and he was led away in handcuffs, he gave the judge a deep bow.

His mother was in court, but made no comments or submissions and was quickly whisked away by friends when the hearing ended.

Mr. Fang was originally charged with first-degree murder in the slaying of his father Si (William) Cheng, 52, felled by a steel crossbow bolt at the east-side Main Street library on Dec. 2, 2010, as horrified onlookers fled the building in panic.

But in July he pleaded guilty to the lesser charge.

He had no criminal record, and no effort was made to suggest he was legally insane – which broadly means a person doesn't realize their actions are wrong – when he killed his father.

Mr. Fang was arrested outside the library as he drove away, and he made no effort to conceal his actions, which all acknowledged were triggered by a lifetime of physical and sexual abuse directed at himself and his mother.

Mr. Fang was so traumatized by his father's actions, which commenced in infancy, that he exhibited clear symptoms of post traumatic stress disorder, Judge McMahon noted.

The judge also praised lead prosecutor Mike Callaghan and defence counsel Mark Sandler for their roles in what he termed "an exceptionally difficult case."

Mr. Cheng's reign of terror started in mainland China, before the small family immigrated to Toronto and later Australia, where they unsuccessfully sought residency, and then returned to Canada.

The abuse lasted more than 15 years, until the marriage ended in 2002, encompassing beatings, sexual violence and unusual cruelty in many forms. Among many other things, the father had poured urine on his son, forced him to eat vomit, hit him repeatedly and ripped the head off the child's pet bird.

He once beat his wife so badly she was temporarily blinded, the court heard. Another time, he cut out the tongue of a live rabbit to show his wife and son what he was capable of doing.

But he was never jailed for long, and after fleeing their tormentor and relocating in Ottawa, Mr. Fang and his mother remained in daily fear of Mr. Cheng, the trial heard.

After Mr. Fang thought he glimpsed his father in Ottawa, he and his mother became so certain they were going to be killed they began wearing bulletproof vests and fire-resistant face hoods, even when home alone.

At one point, Mr. Fang wrote to Governor-General David Johnston and the Queen, pleading that his father be deported to China.

His fear culminated in the acquisition of the crossbow and hammer.

Mr. Fang travelled from Ottawa to Toronto and ambushed his father as he sat at a computer desk and other patrons milled about the busy library.

He fired the crossbow from behind, piercing his father's heart. Then, as Mr. Cheng struggled to extract the steel bolt from his back, Mr. Fang squirted him in the face with an aerosol spray, and crushed his skull with the hammer, court heard.

In a handwritten apology, the young killer said he murdered Mr. Cheng because he was "totally convinced" he and his mother would be killed if he did not act.

Mr. Fang's "ongoing fear," he concluded, "was at the root of what happened." 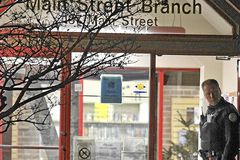 new
Son abused by father he is accused of killing with crossbow, lawyer says
December 4, 2010