Mark Saunders jokes that if he were a fruit fly with a brief lifespan, the honeymoon he enjoyed after becoming chief of Toronto police might seem sufficient. But "from a human perspective, the honeymoon didn't last very long – no, not at all."

From the day it was announced that Chief Saunders would take over from Bill Blair, he has been under attack for defending the much-disputed practice of carding – stopping and questioning people who are not under arrest or detention and recording the details of the encounter.

He isn't taking it lying down. In an interview with The Globe and Mail a week after he was sworn in on May 20, he complained that his critics are never satisfied.

"Every time I've tried to say something, the term 'carding' kind of changes its meaning," he said. "It gets a little frustrating."

Chief Saunders also said that while he is committed to halting random police checks of citizens just going about their business, carding suspected gang members is vital to keeping the city safe. "If it's done right, it protects people."

To those who say that carding amounts to a form of racial profiling, targeting a disproportionate number of racial-minority residents, Toronto's first black police chief said: "We're not sending officers into areas because people are brown or black. We're looking at the charts. We're looking at where the violence is occurring and it's about six per cent of the geographics of the city. And so we're putting officers in there because that's where the violent crimes are occurring."

When critics respond that that amounts to racial profiling by demographics, "Well, I'm, like, going, 'Can someone help me out here? Like, we're getting all the problems but can someone give me a solution?'"

Chief Saunders sat for an 80-minute interview in his seventh-floor office in the pink-granite, postmodern police headquarters at College and Bay. The chief, 52, is a soft-spoken man who has come across as almost shy in his early public appearances. He says he would far rather resolve the carding dispute through dialogue than duke it out with his critics. But don't mistake him for a pushover.

Growing up as a member of the only black family in the then-small and mainly rural Greater Toronto community of Milton, he faced name-calling from other kids and sometimes got into schoolyard scraps. "Usually there'd be one person standing at the end and it would be me." It didn't hurt that he took jiu-jitsu and kickboxing.

Though Chief Saunders got his new job partly for his skills as a mediator, he is not a social worker. After 32 years in blue, with stints on the drug, gangs and homicide squads, he is a cop from his peaked cap to his polished dress shoes. And, in the end, being a cop is all about getting the bad guys.

To get the bad guys, he says, you need to find out who they are and what they are up to. You can't do that by sitting behind a desk or cruising around in your police car, responding only when called. Instead, he insists, officers need to get out on the street to ask questions and gather information – what he calls "intelligence-led policing." It is no mystery, then, that he is determined to keep carding, even if in a more restricted, "surgical" form.

"If our officers have an understanding of who is who in the zoo – who the players are, what the criminal element is – and you record those encounters, I think those are the things that are necessary" for community safety.

To explain, he gives a little background. Some years ago, Toronto realized it was facing a serious problem with gangs. Gang violence, he says, is the scariest problem in what is still generally a very safe city. The 2005 Boxing Day killing of Jane Creba involved rival gangs. So did the Danzig Street mass shooting in 2012.

The police at first responded by flooding the zone – showing a strong presence in neighbourhoods affected by a rash of shootings or other violence. That helped a little, but it was not enough. When A shot B, police would naturally try to find A, but while they were at it, B's crew would be launching a counterattack against A's – the kind of tit-for-tat cycle that makes gang violence so explosive. So police began focusing on learning more about what they were up against. "You get at gangs by finding out who the members of the gangs are," the chief says. "So we got wiser."

Instead of just looking for the A who shot B, they try to find out in advance who A and B are, where they hang out and who their associates are. That way, they can make the connections that are necessary to preventing and solving crimes.

"If I know you belong to the Five Point Crips, you and I are going to have a conversation and I'm going to record the conversation whether you like it or not," the chief says.

He gives an example of how this kind of intelligence-gathering can work. A couple of years ago, parents at a Catholic private school for boys complained that their kids were being robbed near the school. The school happens to be located in the midst of three "priority neighbourhoods" – low-income districts often plagued by crime. The boys were being set upon as they walked through a local ravine.

Police could simply have hidden in the ravine and pounced on the thieves when they tried to rob one of the school kids. Instead, they observed that a group of young men was lying in wait at a playground in the ravine. Police approached them, inquired what they were up to and carded them – took their names and other details. After finding that some had been caught doing robberies before, and going back to the victims for help with identifying the perpetrators, police made a series of arrests.

The chief acknowledges there is a "social cost" to carding: the alienation that can happen when people feel they have been unfairly targeted. Reporting by the Toronto Star revealed that black – and brown-skinned men were being carded in numbers out of proportion to their share of the general population. "I know what it's like in a priority neighbourhood being stopped multiple times, multiple times, multiple times."

If police treat someone roughly or disrespectfully while gathering information, he says, they have to expect that 15 other people are watching and forming their opinions about police. "So tomorrow when you walk past one of those 15 and you say hello to them, they say 'F you,' and you're saying, 'Ah, I hate everybody here.' "

To prevent that cycle of mistrust, the chief says he is bringing in better training for officers to make sure they treat everyone with respect. That is part of a deal reached between the police service and the police board in March to reform carding. Chief Blair suspended the practice at the start of this year.

Chief Saunders also says he will end random carding that sweeps up the innocent in its net. "You're going to catch a billion herrings with that net but you're also going to catch the odd dolphin, the odd sea turtle. Those sea turtles, those dolphins – that's a kid that's getting A in math, science and technology."

To make sure police don't go overboard with carding just to pad their numbers, he notes, police management has agreed not to use carding records when evaluating the performance of officers.

"There is no more measuring. That's off the table," he said. "So when you take that off the table and take off the random component and say it's more intelligence-led and we're going to give them the proper training, I think that what's going to happen is that we're back to what we were doing right."

None of this, he acknowledges, is likely to satisfy his critics, some of whom want an end to carding in any form. He is not discouraged. "I signed up knowing there'd be criticism. This is policing and if you're not thick skinned it's a very tough industry to make it through."

Despite the criticism, he says, he is getting many comments from ordinary people "supporting the direction that I'm going. They're saying, 'Keep fighting the fight, you're doing a good job.' Some are saying, 'Don't back down.'"

He is showing no sign whatsoever of doing that.

Appointment of Toronto police chief has the ring of history
April 20, 2015

New police chief is a strong leader, but changing the force won’t be easy
April 20, 2015 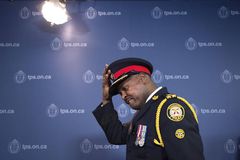 Through the good and very bad, Bill Blair remained himself. We were lucky to have him
April 24, 2015 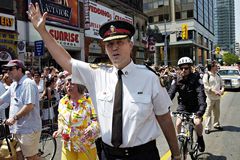