Mayor Rob Ford called senior staff to his office this summer to request unscheduled road improvements outside his family-owned business in time for its 50th anniversary bash.

The job, completed before the August celebration at the Etobicoke headquarters of the Ford family's Deco Labels and Tags, cost the city between $7,000 and $10,000, staff estimate.

John Mende, the city's acting general manager of transportation, said he and his boss, deputy city manager John Livey, attended a meeting with Mr. Ford on July 31 where he asked that the work be completed before Aug. 10 – the original date for Deco's party.

"He said to staff, 'Look I've got this anniversary. Is there an opportunity to do repairs before that event takes place?' " said Mr. Mende, recounting the meeting with Mr. Ford.

The work in question was done on Greensboro Drive, a short industrial road in north Etobicoke, and included repairs to the culvert that runs adjacent to the Deco property, improvements to drainage and patching of potholes, Mr. Mende said.

George Christopoulos, the mayor's press secretary, told The Globe and Mail that Deco made requests to the city for road repairs "for a number of years" and confirmed a request to complete those repairs before the anniversary celebration.

"We also understand that there was an agreement to bill the company if any unusual costs were incurred," he said in an e-mailed response to questions. "It is also my understanding that the company was not afforded any extra service that city staff would not have provided to another company in similar circumstances."

Mr. Ford was met at the island airport by reporters when he returned from his Chicago trade mission. While other councillors and members of the group left by the usual route and answer reporters' questions, the mayor waited in the baggage area for the ferry to arrive, then slipped out a side door to a waiting car.

Asked about the paving work, a spokesman for the mayor said there would be no comment beyond a statement sent to The Globe and Mail Wednesday.

The Toronto Star reported Thursday that a senior transportation official twice told the newspaper that a "private individual," not the mayor or his brother, Councillor Doug Ford, asked for the improvements outside Deco.

The official, Peter Noehammer, told The Globe in an interview Thursday that he did not know the mayor had made the request himself.

Mr. Noehammer is the director of transportation responsible for the Scarborough district and he was filling in for Mr. Mende when The Star made its first call in August, he said. He repeated the same information in response to a second call in September.

Mr. Noehammer could not say when or how he found out about the mayor's involvement.

"Just, I guess, more recently. I don't know exactly what date [I found out,]" he said.

Mr. Mende reportedly told The Star Thursday that the mayor himself attended a site visit with special assistant Chris Fickel at the beginning of July.

Mr. Mende told The Globe on Wednesday that he did not know who attended the site visit on Deco's behalf, but that he believed it was a company official. He did say the visit followed a request from the mayor's office.

Mr. Mende did not respond immediately to follow-up calls Thursday.

In his 16 years in the city's transportation department, Mr. Noehammer said he had never had an elected official ask him or his colleagues to expedite road work on personal or business property.

"No, I don't recall where they were personally involved, no," he said, adding that requests from councillors to fix up streets are usually made on behalf of constituents or Business Improvement Areas.

Councillor Denzil Minnan-Wong, the chair of the public works committee and an ally of Mr. Ford, said that any Toronto business that made the same request for road repairs would have been treated the same way.

"I have been told by staff that they didn't offer any special consideration [to Deco]," he said.

However, Mr. Minnan-Wong said he does not think it was right for the mayor to make the request directly to the most senior officials in the city's transportation department.

"If I was the mayor, I would keep my interest in any private companies separate from my duties and responsibilities as an elected official," he said.

Mr. Ford needs to be more vigilant about separating the personal from the political, the councillor added.

"The mayor has to clearly separate his roles and responsibilities as mayor and his other interests, especially given the number of incidents of late because he's going to be under increasing scrutiny," he said.

Mr. Livey, one of the highest-ranking civil servants with the city, referred all questions about the meeting and the work to Mr. Mende.

A banner marking the five-decade history of the Ford family business still hangs from Deco's headquarters this week. Two short driveways onto the property are freshly paved, as is a separate entrance to the parking lot. A culvert on the edge of the Deco property has been recently patched and repaired, as has a pothole about 20 feet long in the centre of the road. Other cracks in the pavement also appear to have been filled recently.

As part of the job, work was done by the city contractor on Deco property, and the company will be invoiced by the city for that work, Mr. Mende said.

City records show that Gazzola Paving Ltd. was the successful bidder for the contract to do paving work in the former cities of Etobicoke and York this year. That contract, worth $2.88-million, includes a list of roads for major reconstruction, but Greensboro is not among them.

Mr. Mende confirmed the Greensboro job was not planned, but said it is not unusual for the city to ask its contractor to do additional repair work as part of its contract, and the work on Deco's street falls into that category. The city also tries to do work in co-ordination with major events such as Taste of the Danforth or the coming Scotiabank Marathon, he said.

The timeline was short, but Mr. Mende said the city was able to accommodate the mayor's request because Deco was using the same company – Gazzola Paving – to resurface its parking lot before the anniversary event.

"It was only because the contractor was on site," he said. "It would not have been doable otherwise."

The work was completed less than two weeks after the meeting in the mayor's office for the Aug. 10 deadline, but the Deco party was postponed to Aug. 24 after Mr. Ford was admitted to hospital, Mr. Mende said.

Deputy Mayor Doug Holyday, a former mayor of Etobicoke, said the city gets plenty of special requests from businesses and residents. "It is not out of the ordinary for someone to call and ask for special treatment. If we could accommodate them, we would," he said.

Councillor Gord Perks was critical of the road-repair request. "Everyone who is waiting for a pothole to be repaired in their neighbourhood should be very angry that the mayor thinks he can jump the queue."

In the first six months of this year, the city's transportation department received 6,300 "service requests" for the York and Etobicoke region of the city, which included a range of issues such as cleaning catch basins, cutting grass or filling potholes. Some work, such as pothole repairs, are targeted to be done within days, Mr. Mende said. Other jobs, such as culvert repairs, usually take weeks, he said. 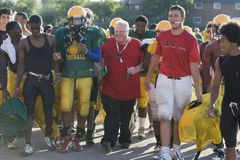