Toronto Mayor Rob Ford's office asked city staff to look into using one of their most coercive powers – the expropriation of privately owned land – to help a client of the mayor's family business add more parking spaces.

Mayor Ford's relationship with Apollo Health and Beauty Care, a soap manufacturer that contracts the Ford family's printing company to make labels for its products, is the focus of an ongoing investigation by Toronto's integrity commissioner. In the first two years of Mr. Ford's mayoralty, he and his brother Councillor Doug Ford, repeatedly came to the aid of Apollo, helping the soap company unsuccessfully lobby the city's top manager for a special property tax break and calling a meeting with three top managers after water inspectors began probing Apollo's alleged role in a sewage spill.

A new cache of documents released by the city under the Freedom of Information Act shows that Mayor Ford's advocacy on behalf of Apollo was more extensive than originally reported: In June, 2011, Mayor Ford's office summoned the bureaucrat in charge of expropriation, Tim Park, to a meeting to explore whether the city could acquire 7,000 square feet of land so that Apollo could use it as parking space for 24 vehicles, the records show. The land sought is owned by Suncor Energy Inc., the oil and gas giant that owns a tank farm next to Apollo's plant.

Mayor Ford also involved himself in an investigation by the city's licensing and standards department after Apollo complained about the appearance of Suncor's oil tanks, the records show.

Neither Mayor Ford nor Councillor Ford responded to a list of questions sent to them about this story. The Municipal Conflict of Interest Act forbids both of them from voting or speaking to matters in council in which they have a potential financial interest, but not their duties outside of council chambers. At a mayoral debate held on Thursday, Mayor Ford referred to news stories about his help for Deco clients as "innuendo" and said his company had not benefited at all from his term as mayor.

In addition to Apollo, Mayor Ford and Councillor Ford also helped RR Donnelley and Sons, another Deco client and one of the world's largest commercial printers, lobby city officials about obtaining a contract with the city's printing division, a Globe and Mail investigation found. At least two citizens, as well as the ethics watchdog Democracy Watch, have filed complaints with the city's integrity commissioner about the Fords advocating for Deco clients in their role as mayor and councillor, but any findings about those complaints will not be released until after the Oct. 27 mayoral election.

By 2012, a year after the Fords took office, Apollo became one of Deco's more valuable clients, five former Deco employees have said in interviews. Estimates on how much that business was worth vary, but three label industry sources said in interviews that, at a minimum, it amounted to about $1-million in revenue a year for Deco.

The new records released by the city show that Apollo's co-owner, Richard Wachsberg, repeatedly urged the mayor to exercise his power when Mr. Wachsberg encountered problems with the 400,000-square-foot factory Apollo was erecting in the north end of Toronto – even when those problems appear to have had very little to do with the city.

In June of 2011, Mr. Wachsberg faced a conundrum: He was unhappy with how the parking spaces in Apollo's private lane might clog up incoming and outgoing traffic, but if he removed the parking spots he would be obliged, because of municipal requirements, to put the parking spaces somewhere else.

In need of a solution, he asked Mayor Ford and Councillor Ford to get involved: "We must fix this. I cannot occupy the space if I cannot access or egress the space," Mr. Wachsberg wrote to them in an e-mail on June 14.

The mayor's staff reacted swiftly. They summoned the head of planning for the area, Neil Cresswell, as well as Mr. Park, the city official who oversees the city's expropriations, to meet with the mayor and Mr. Wachsberg at the building site three days later.

When Mr. Cresswell learned that expropriation – a mechanism the city utilizes when it needs to force the sale of privately owned land – was being considered, he e-mailed Mr. Park. "Are you involved because somebody floated the idea of expropriating land from Suncor for additional parking? Sheesh," he wrote on the morning of June 17, hours before the meeting.

In reply, Mr. Park said he reminded the mayor's office that the city can only expropriate land for public use and not private interests, but to no avail. "Despite the fact that I explained we can only do that for municipal purposes. … I've still got to go up there and do the dog and pony show," he wrote.

In interviews, city staff said this message was reiterated to the mayor and Mr. Wachsberg at the June 17 meeting. Nonetheless, three days after the meeting Mr. Wachsberg e-mailed the mayor a map that outlined the parcel of Suncor land that Apollo hoped to use for parking. The site plan is labelled "Option A – 24 Parking Spaces."

"The attached plan is what we are pursuing in exact consideration of our discussions on Friday," Mr. Wachsberg wrote. "We ask your great courtesy to obtain the 7,195 sq ft of land at the NE corner of the Suncor lands for our use as lease … Thank you for your generous efforts." The records do not show what Mayor Ford or his staff did with this request. Ultimately, the Suncor land was not acquired by anyone and Apollo reached an agreement with a different neighbour to solve its parking dilemma.

After being read one of his e-mails to the mayor, Mr. Wachsberg said he had "no recollection" and "no knowledge" of asking the mayor to acquire the land for his company. He praised the mayor for his responsiveness to other issues and said news stories that raised questions about the mayor acting on behalf of Apollo were "a bunch of hooey."

A spokeswoman for Suncor said that Mayor Ford attended a June, 2011 meeting between the Calgary-based oil and gas company and Apollo where the parcel of land was raised. The two companies discussed the possibility of Suncor leasing it to Apollo, "but that lease was never finalized," said the spokeswoman Sneh Seetal.

The mayor's office called for that particular meeting, Ms. Seetal said, because of a different issue between Suncor and Apollo – the appearance of several massive oil tanks that, at the time, bordered Apollo's new factory.

Inspectors with the Toronto's licensing and standards division issued work orders to Suncor in the spring of 2011 after someone complained about the appearance of the tanks, some of which had rusted over. (As a matter of policy, the department does not identify complainants.) The same inspectors also issued work orders to Imperial Oil Ltd. and Shell Canada Ltd., both of which also own tanks near Apollo. All three companies signed agreements to paint the tanks, and Suncor eventually demolished two tanks that it no longer used.

But the pace of the beautification was not satisfactory for Mr. Wachsberg.

On March 28, 2012, Mr. Wachsberg e-mailed one of the mayor's assistants about what he described as the lack of progress on the oil tankers. "So far, one tank is painted and 3 are in various stages of repaint but I fear that no work has been done for some time."

Four months later, in July, he again e-mailed a mayoral aide about the tanks.

By August, the records show, the mayor's office had contacted Tracey Cook, the executive director of the city's licensing and standards department, who asked her staff to explain what was going on with the tanks. The mayor "would like the property spruced up – between us," Ms. Cook wrote.

In October, one of the investigators, Eletta Purdy, visited the tanks to see how the painting was coming along. In an Oct. 4 e-mail to Ms. Cook she explained that "the view from the Apollo soap company is much improved!" 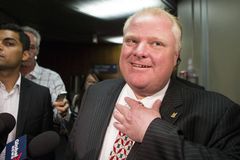 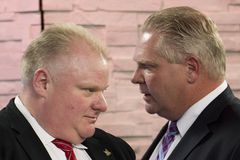 Ford breaks silence on lobbying report, says he did nothing wrong
May 11, 2018 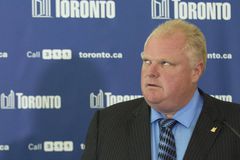 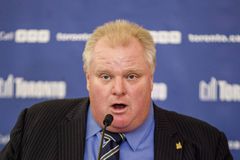 Follow Greg McArthur and Carrie Tait on Twitter @McarthurGreg @CarrieTait
Report an error Editorial code of conduct
Due to technical reasons, we have temporarily removed commenting from our articles. We hope to have this fixed soon. Thank you for your patience. If you are looking to give feedback on our new site, please send it along to feedback@globeandmail.com. If you want to write a letter to the editor, please forward to letters@globeandmail.com.
Comments