Canadians are marking the country's 150th birthday in a less-than-triumphant frame of mind. Many have anxieties about the present and doubts about the future. They tell pollsters they expect to be in worse, not better, shape in the years ahead.

I wish all those anxious Canadians could meet my new friend, Ramsha. Five-foot-three inches of energy, optimism and intelligence, she is a walking rebuke to the country's doubters.

I met Ramsha Naveed when I went to buy newspapers the other day at her father's corner store a block from Toronto City Hall. She said she wanted to be a journalist when she finished school. I offered to take her for coffee to chat about the business.

We sat down a few days later at a sleek café where people pecked at their laptops and stared at their phones. Ramsha ordered an iced chai latte in a clear plastic cup and started talking – and talking and talking. Growing up, she said, "I was the shyest and quietest kid ever. You couldn't get a word out of me, which is something you would never believe now."

Ramsha arrived in Canada with her parents when she was five. They came for opportunity – "the Canadian dream, I guess." Her father has an advanced degree in physics. Her mother was trained as an accountant. Pakistan was getting less and less safe. They wanted a better future for Ramsha and her older sister.

They arrived in winter. Getting off the plane, "I was, like, 'Oh, my God, it's snow.'" Ramsha got to wear her new Canadian outfit: coat, snow pants, boots, hat, mittens – all in her favourite colour, purple.

At first, "It was just weird. I didn't really know what was going on." But in senior kindergarten, she found she was way ahead of her classmates. She was doing long division and starting to read novels. They were learning to spell their names. Her teacher moved Ramsha's desk next to hers and they worked on division. When Ramsha was bored, which was often, she went to the library. By the early grades, she was a Jane Austen fanatic. She reckons she has read Pride and Prejudice 100 times.

A remarkable teacher, Miss Rousseau, helped Ramsha spread her wings. Her class in the gifted program at her Forest Hill public school did projects on everything from vampires to cryptology to prostitution.

Now, at 20, Ramsha studies political science at the University of Toronto. On the side, she works at The Varsity, a student newspaper, does shifts at the corner store, volunteers at a program for under-served youth and serves on a City of Toronto committee that is evaluating "participatory budgeting," a way of drawing citizens into the budget process.

Her interests range from Barcelona's "superblocks" – car-free zones that calm city life – to NHL hockey. "I think the most soothing sound in the world is a stick hitting a puck." Although she hates the thought of punching anyone, she loves hockey fights, which she calls "padded aggression." She also likes, in no special order: Elvis; Jeff Buckley's version of Leonard Cohen's Hallelujah; jazz, a recent interest; Barack Obama, her childhood hero; the vox.com news site; and lettuce. "I'm a huge fan of lettuce. I genuinely think it's a great thing."

A Muslim, Ramsha dresses modestly in long sleeves and pants, although she tends to roll up her sleeves when she is debating something, which annoys her mother. She thinks Canada is a pretty great country – "As long as you're not a terrible person, you are able to live here in peace" – but she is not so into the 150th. Canadians, she offers, aren't the flag-waving types. "We're proud, but we're chill about it." As for Toronto, well, "I feel I could never not live in Toronto."

Her favourite person is her sister, Hareem, who is 23 and working in data science at the University of Chicago. When they talk, the conversation skips from a recent report in The Globe and Mail on how geography helps determine income to whether Rihanna looks good in Wild Thoughts (consensus: yes).

No one who spends a few minutes with Ramsha can come away feeling gloomy about Canada. In Toronto, that immigrant launching pad, there are thousands, tens of thousands like her – bright, young, ambitious and headed for great things. 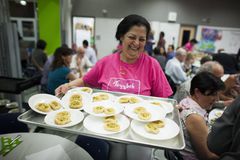