As Metrolinx prepares to pitch Junction residents on a plan to build a 1.5-kilometre bridge to lift the Barrie GO Train line over a busy midtown freight corridor to prepare for all-day, two-way service, the agency revealed on Tuesday that the project would cost about $120-million. This compares with the estimated $650-million required to build a tunnel.

The two tracks intersect at a level crossing west of Lansdowne Avenue known as the Davenport Diamond.

The bridge plan will be less disruptive to traffic than building a tunnel, as was done with three other level crossings in the city, Metrolinx officials told The Globe and Mail, noting that burying the tracks would involve closing St. Clair Avenue West and Dupont and Davenport streets during construction. The viaduct is projected to take two years to build, whereas a tunnel – which, at this location, would have to be 2.5 kilometres long – would require five to seven.

The agency in recent weeks informed Junction residents and local elected officials new public spaces could be created beneath the elevated structure on either side of the freight tracks. To provide clearance for double-decker train cars, the bridge would be 8.5 metres high, or about three storeys, at its maximum point just north of Dupont Street.

Some area residents felt that the provincial agency, which will hold public meetings later this spring, did not take their opinions into account on other projects involving west-end rail corridors, and they fear that will happen again. "Once Metrolinx has made up its mind, they're doing it," said Kevin Putnam, who co-founded the Junction Triangle community association. "Maybe [the bridge] is the best option, but residents haven't had a chance to figure that out."

Ana Bailao, councillor for Ward 18 (Davenport), where the bridge would be built, added that while she sees potential community benefits from rail corridor lands beneath the bridge, the agency has to be more forthcoming about how it would finance those improvements. "To have good and useable public space, you need to have funding," she said. "Some of $500-million [in savings] should be to diminish and decrease the impact of [the bridge]." City planners said they have yet to assess Metrolinx's proposal.

Metrolinx officials insisted they intend to canvass planning staff about the potential impact of a long, elevated rail bridge, likely equipped with sound barriers, on neighbouring structures as well as several residential and commercial developments currently in the approvals pipeline. The agency said in a letter to residents that it is also looking for 36 volunteers to sit on a "reference panel" that will provide feedback on the proposed bridge and improvements underneath. The panel will also hold a public "roundtable" on May 12. Metrolinx plans to make its final decision later this year.

Anne Marie Aikins, a Metrolinx spokeswoman, said it is too soon to talk about how much the agency is prepared to spend on improvements such as reconnecting city streets once severed by the tracks or building new parks or bike paths on the land freed up by elevating the rail line. She acknowledged that Metrolinx project budgets do include funds for such extras.

The agency, Ms. Aikins added, is also open to professional proposals, such as the architectural plan that created the West Toronto Railpath. She said the final decision depends on what the community suggests. Metrolinx does not intend to sell or lease land under the bridge for development, officials added.

Over the past eight years, Metrolinx has spent hundreds of millions of dollars building grade separations at crossings along the Georgetown corridor, which runs northwest through the city.

When Metrolinx engineers began looking at the Barrie line last fall, they realized that to lower the tracks enough to pass 8.5 metres below the CP freight corridor, the agency would have to create a 2.5-kilometre tunnel. According to Metrolinx, it would also involve relocating underground utilities such as pipes and cable conduits – engineering headaches that have driven up budgets on other large infrastructure projects, such as Queen's Quay.Special to The Globe and Mail 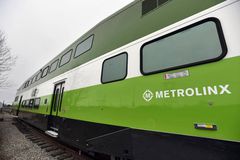