Many who've taken Via have soaked up the landscape from the dome car, which was supposedly born of a railway executive's desire to give passengers a view similar to the one from the locomotive. But for most of the public, the chance to ride in the cab itself remains an elusive treat.

This week, a train-mad young Toronto boy joined that elite crowd, parlaying his blog at aboywholovestrains.com and growing celebrity in railway circles into a seat on a GO Train locomotive.

"It was cool," Nathan O'Neill, 7, said after climbing down at Union Station, leaving the 4,000-horsepower engine throbbing behind him. "I honked the horn and I rang the bell."

The ride on the train came after a wide-eyed tour of GO's Willowbrook maintenance facility in Mimico. Shepherded through by senior staff members, he learned how old wheels are reground for additional use, the way the locomotive relies on both diesel and electric motors, and the size of their fuel tank (1,600 imperial gallons, or 7,274 litres).

Nathan was clearly engrossed but soft-spoken and reserved for most of the visit. His mother, who came along, said that is just his nature.

"He does cartwheels," Dana Bookman said. "You can't see it because he's so shy, but he's so excited he could burst."

On one level, this is a story about the power of social media. Nathan's blog brought him contact with Canadian Pacific Railway, whose staff he visits periodically, and sparked media coverage. Then, Metrolinx stepped up to offer this ride in a GO locomotive. This week, he's taking a birthday trip to Niagara Falls on Via, which is presumably on its mettle to up the ante.

But on a simpler level, this is about a boy who loves trains. About a seven-year-old who used to ride the subway endlessly with his father, watches for trains at level crossings and has dreams of maybe being an engineer.

Many parents would attest that a passion for trains is common among their boys. According to Nathan's mother, his love started with the subway, but he was bitten by the freight bug after seeing his first CP train.

"He keeps asking us to buy a house beside the tracks, so he can see the train every day," Ms. Bookman said.

Nathan started the blog last autumn with an entry – titled "This is paradise" – about receiving a train whistle and sunglasses from CP. A video last month of a freight churning through clouds of snow in New Brunswick is described simply as "awesome." However, he tends to be more expansive online, writing glowingly about riding the CP holiday train, the model sets he's been given and the time he used a simulator at the Toronto Railway Historical Museum.

"I learned a lot about driving a real train," he wrote. "I never knew I could drive a train!"

Any day he is expected to update the blog with details of the GO Train trip, one likely to make him the envy of his classmates.

The visit to Willowbrook and train ride into Toronto were the result of the regional transit agency Metrolinx, which operates GO, reaching out to the boy. A spokeswoman said it wanted to help feed his interest.

"A train enthusiast showed me Nathan's blog and I was really touched by how passionate he is about trains," Anne Marie Aikins explained. "I'm hoping we were able to fuel his passion just a little more and have some fun in the process." 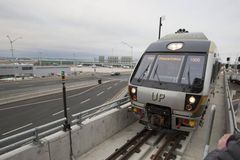 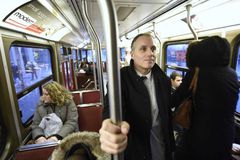